There are many interesting things about the Grand Canyon State. But if you want to be further amazed, we’ve got the article just for you! Did you know that there are a lot of cool large things in Arizona? This list may surprise you. Keep reading to see how much you really know about the things that can be found here.

These large things in Arizona are much bigger than us and really have the WOW factor: 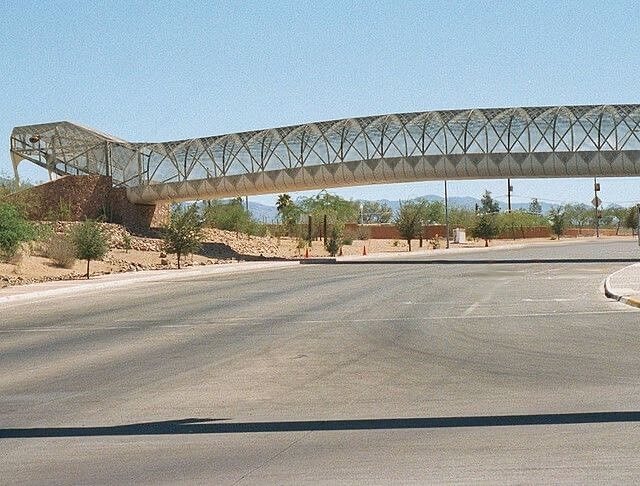 Okay, so this might not be an actual rattlesnake, but it definitely looks cool!

Forget about the regular lighted bridges. This one is both scary, interesting, and quite intriguing! The Rattlesnake Bridge in downtown Tucson is definitely an eye-catching structure because it’s not like the usual bridge you see in other towns. If you are curious about the idea behind this beautiful creation, its artist Simon Donovan designed it with the local wildlife in mind. Once you come close to the Rattlesnake Bridge, you’d actually notice that it is biologically “accurate.” The one end of the entrance displays a massive snake head with 10-foot-tall diamondback fangs and sinister reptilian eyes. Furthermore, the bridge is also made of metal, representing the hues and gradient of a real rattlesnake. If you are beneath this snake creation, you will see the accurately-spaced segments of the beast, which is actually the stomach. There are also linings that really depict it as the belly.

2. This massive green head in the middle of the road 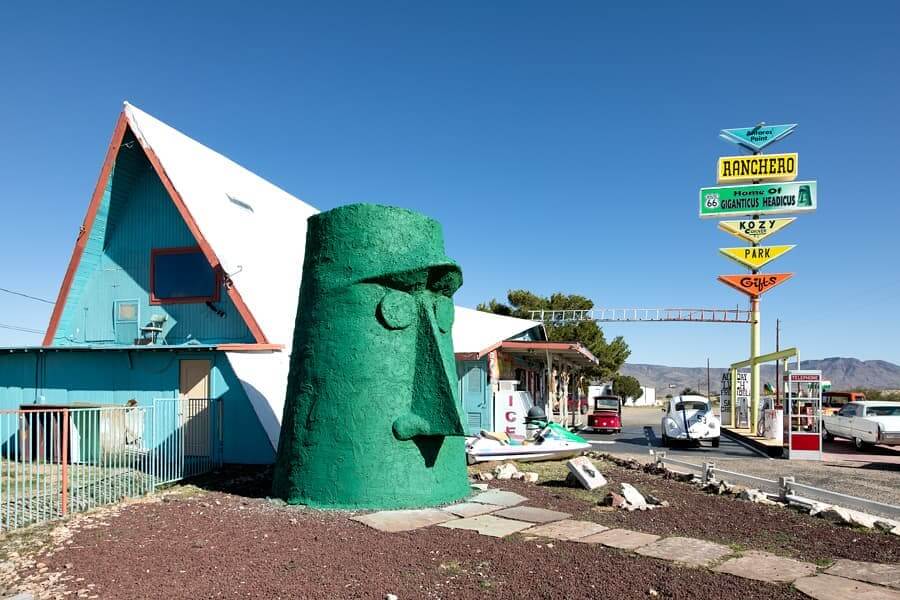 One of the interesting large things in Arizona is probably Giganticus Headicus. You can spot this sculpture on your way to Kingman. It is part-Tiki and part-Moai, and also a very popular roadside attraction in the state. Back in 2003, artist Gregg Arnold created this 14-foot-tall statue out of metal, wood, chicken wire, Styrofoam, cement, and green paint.

If you want a fun stop in Route 66, you surely won’t be disappointed!

3. There is also a giant longhorn skull lying around in the middle of the desert 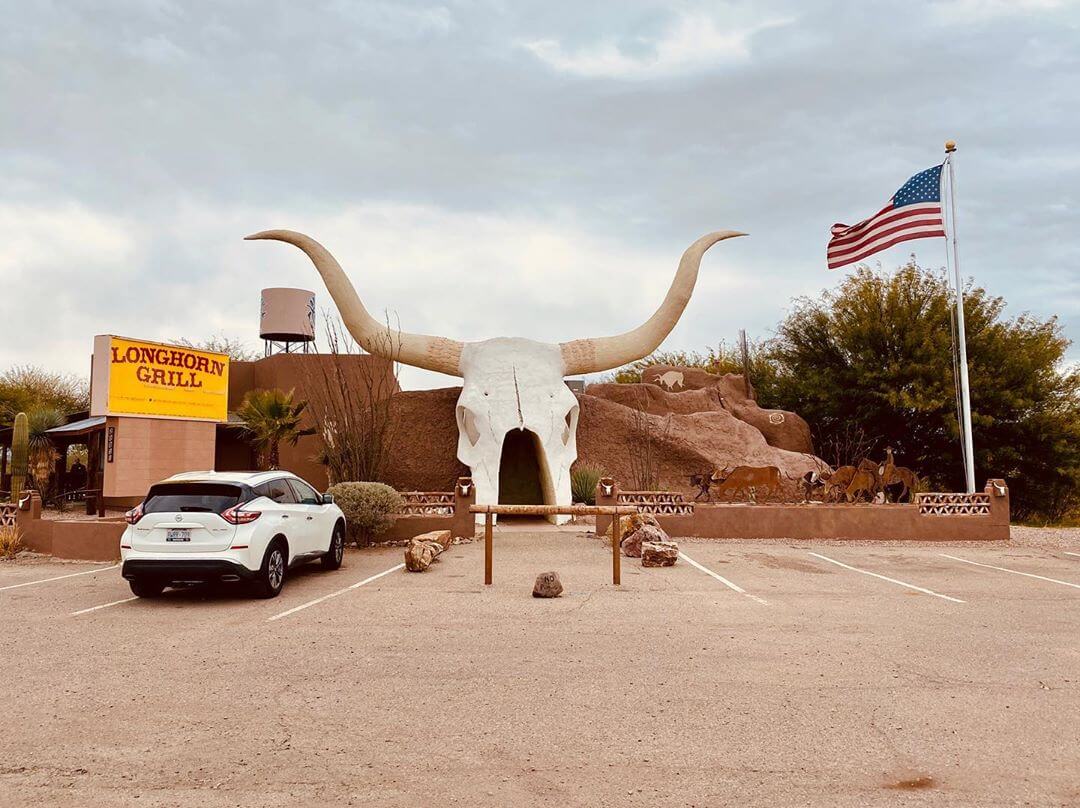 With an eye-catching skull made of concrete, stucco and rebar, with horns that are 30-feet long, you bet there’s a lot of people who took interest in this place. It’s no wonder that this place was also used as a filming location for several movies such as “Vanishing Point,” “Alice Doesn’t Live Here Anymore,” and “Boys on the Side.”

Longhorn Grill Arizona already demands your attention with the vast skull at the entrance. But why are people flocking to this place? You can say it’s all because of its striking appeal and delicious steak! Many visitors know that Longhorn Grill Arizona remains a proud Western roadside icon up to this day.

4. The stunning destination that everyone loves dearly 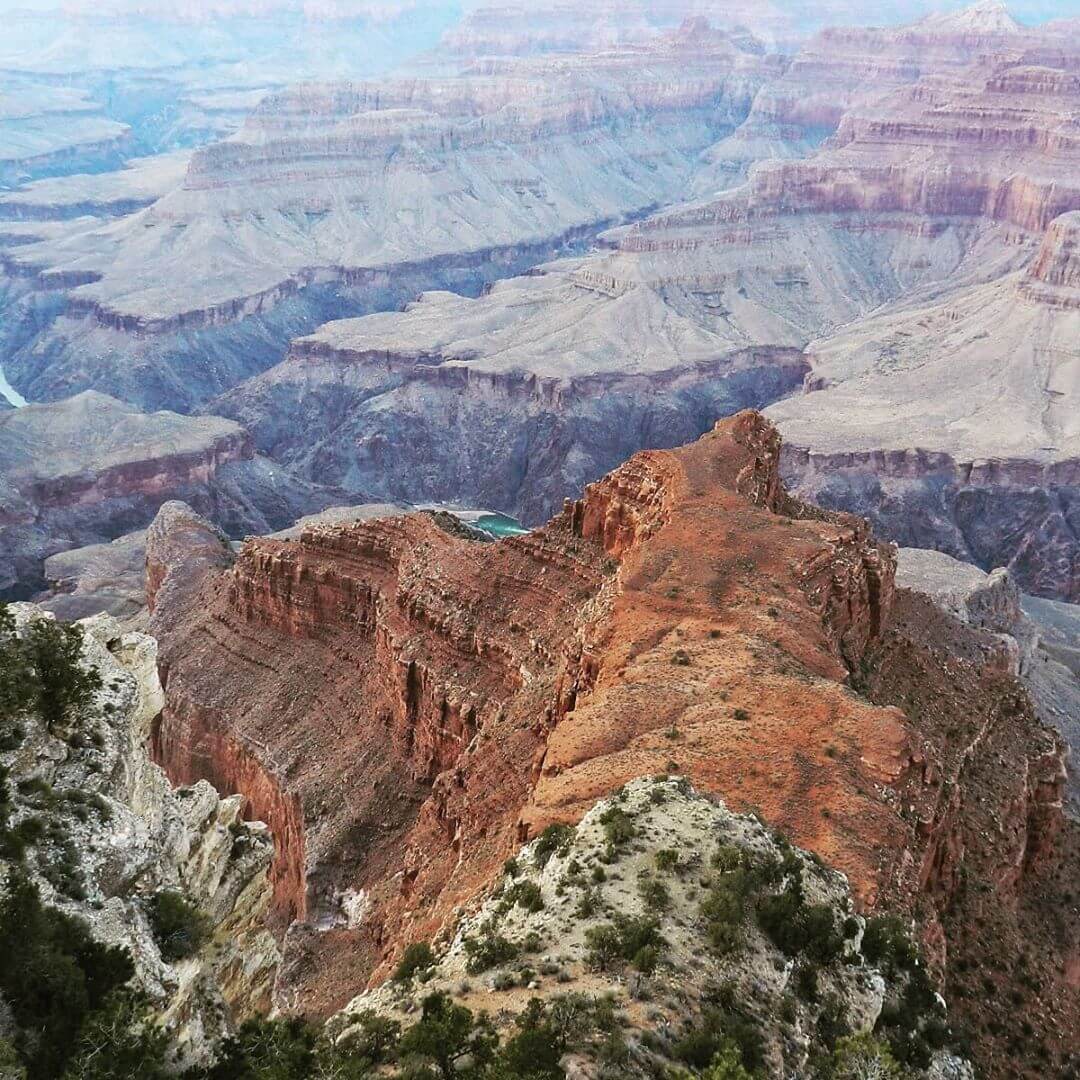 Don’t think that the only cool large things in Arizona are the quirky road attractions. We might as well include the stunning destination that the whole world loves dearly. The Grand Canyon in Arizona stretches for 227 miles long and averages over fifteen miles wide. It boasts such an impressive size and scenic formations, that people from all over the world travel here just to get a glimpse of the beauty.

To put it in perspective, you can stand on top of One World Trade Center in New York City, at 1,776 feet. If you compare it to Grand Canyon, you’d be merely are standing roughly 1/3 of the way up the height of Grand Canyon’s walls of stone. That’s crazy, right? 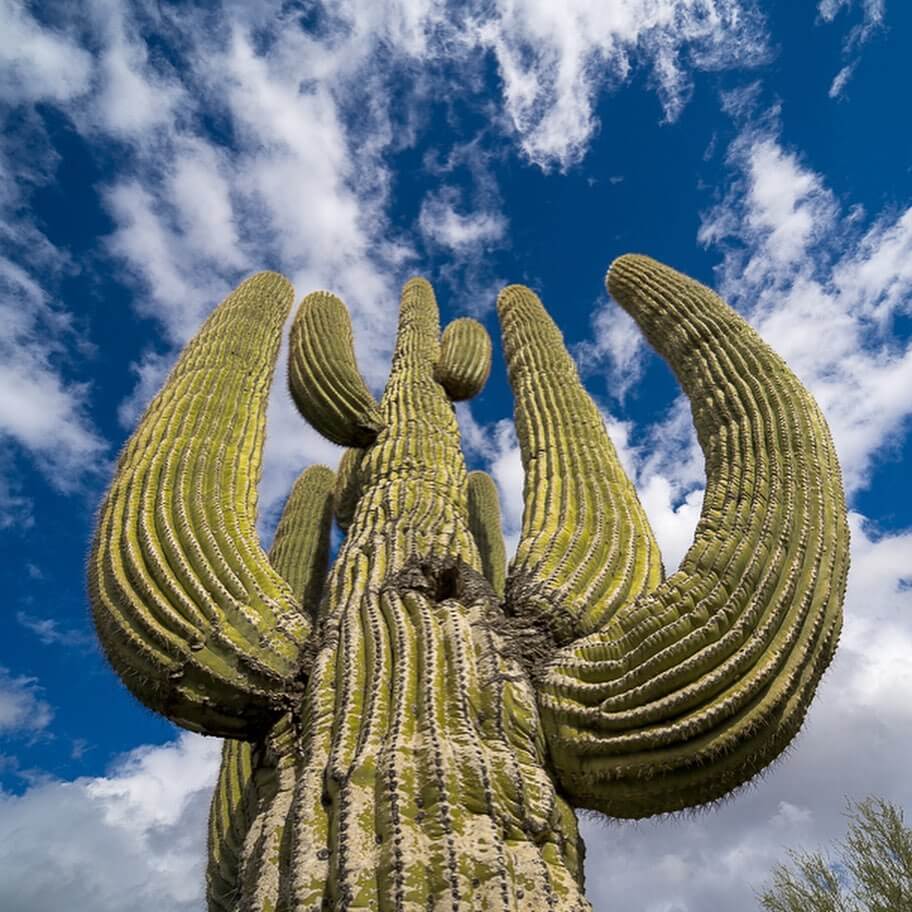 As it turns out, Arizona is home to the largest cactus in the United States, the saguaro cactus. It normally reaches heights of 40 feet, with the tallest saguaro cactus ever measured towered over 78 feet into the air. These desert plants are native to the Sonoran Desert in Arizona, and grows very slowly. It takes years for one to grow a few inches, but fast forward to a hundred years, and you’ll see them standing tall above the rest! Don’t forget to strike a pose the next time you are hiking Arizona’s trails and see a saguaro cactus. 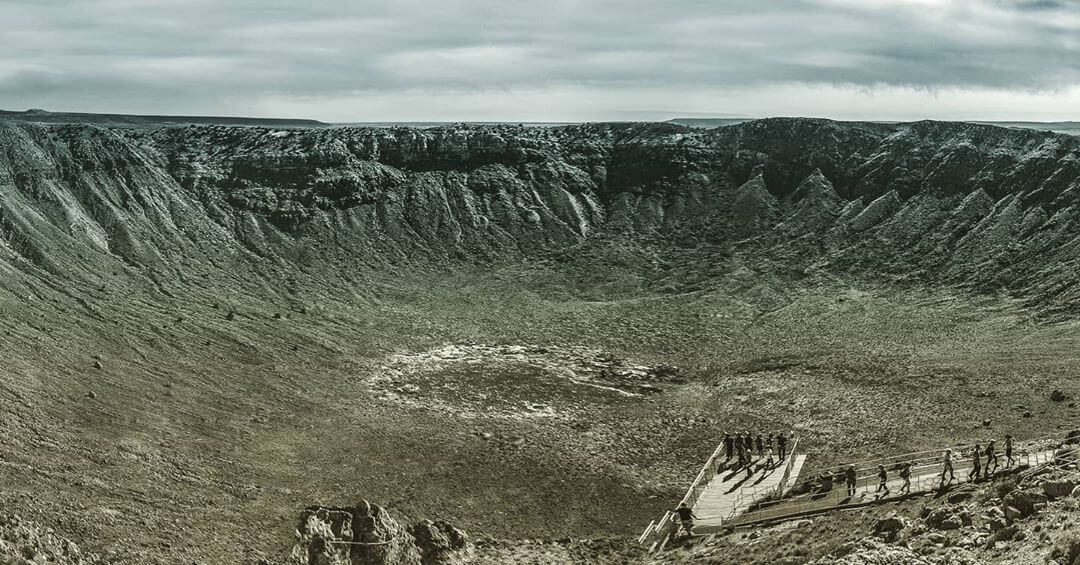 Don’t be surprised but one of the cool large things in Arizona is this meteor crater, an amazing stop along the historic Route 66. It lies at 5,640 feet above sea level and can be seen from outer space! If you are curious, this crater was formed due to the explosion of a meteorite during prehistoric times. When you compare the Meteor Crater in Arizona versus anywhere else in the world, it’s amazingly preserved because of the dry climate.

The crater is massive in size because it is approximately 3,900 feet wide (in diameter), 560 feet deep, and is enclosed by a rim that’s about 148 feet above the surrounding high-desert terrain. Just by looking at it, don’t you feel like you’ve already been transported to another planet? 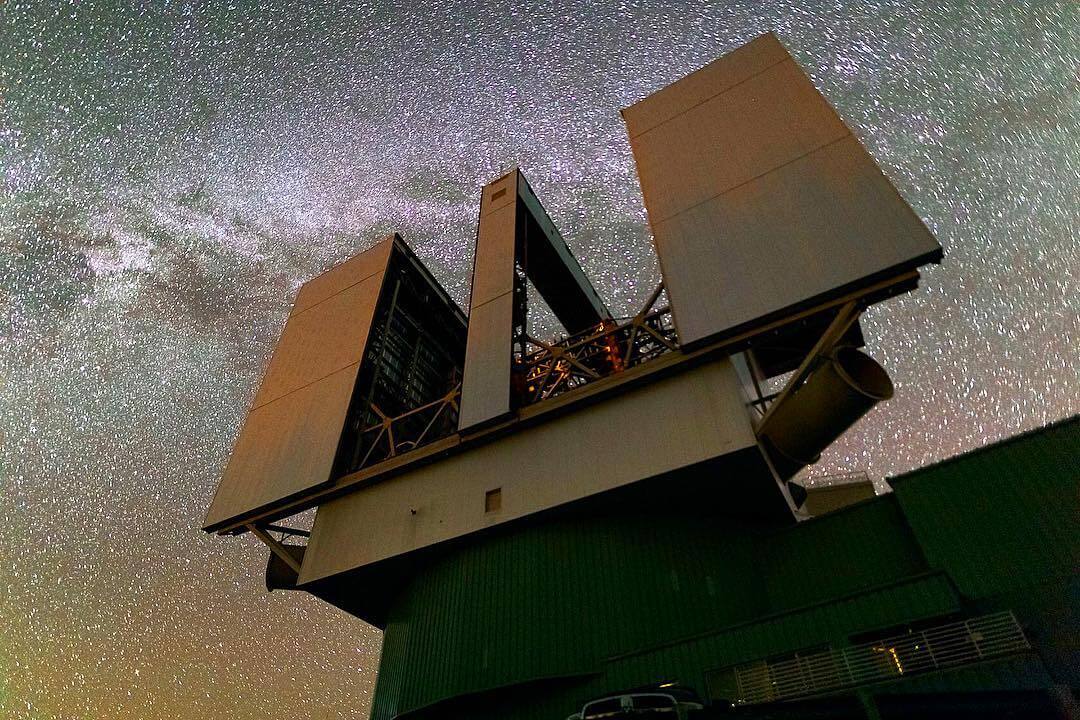 Yes, the largest telescope in the world is in Arizona. The Large Binocular Telescope is located in southeastern Arizona’s Pinaleño Mountains, and is used at the Mount Graham International Observatory. It stands just under 11,000 feet tall, and is made up of a set of two, identical 8.4-meter mirrors. Not to mention, it weighs a lot given that the telescope is 600 tons of steel and glass. 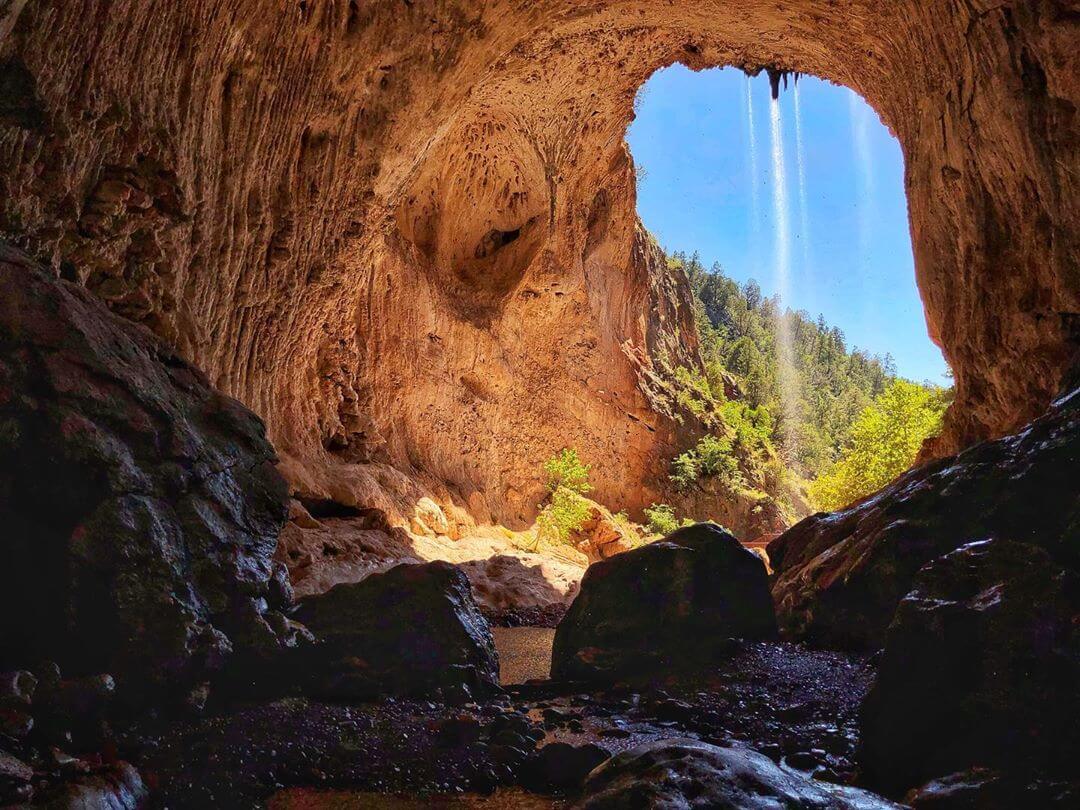 Many travelers like to hike and check out Tonto Natural Bridge, which is believed to be the largest natural travertine bridge in the world. The area surrounding this bridge was converted to a state park and is now called Tonto Natural Bridge State Park. No doubt, this is a beautiful place to enjoy nature. 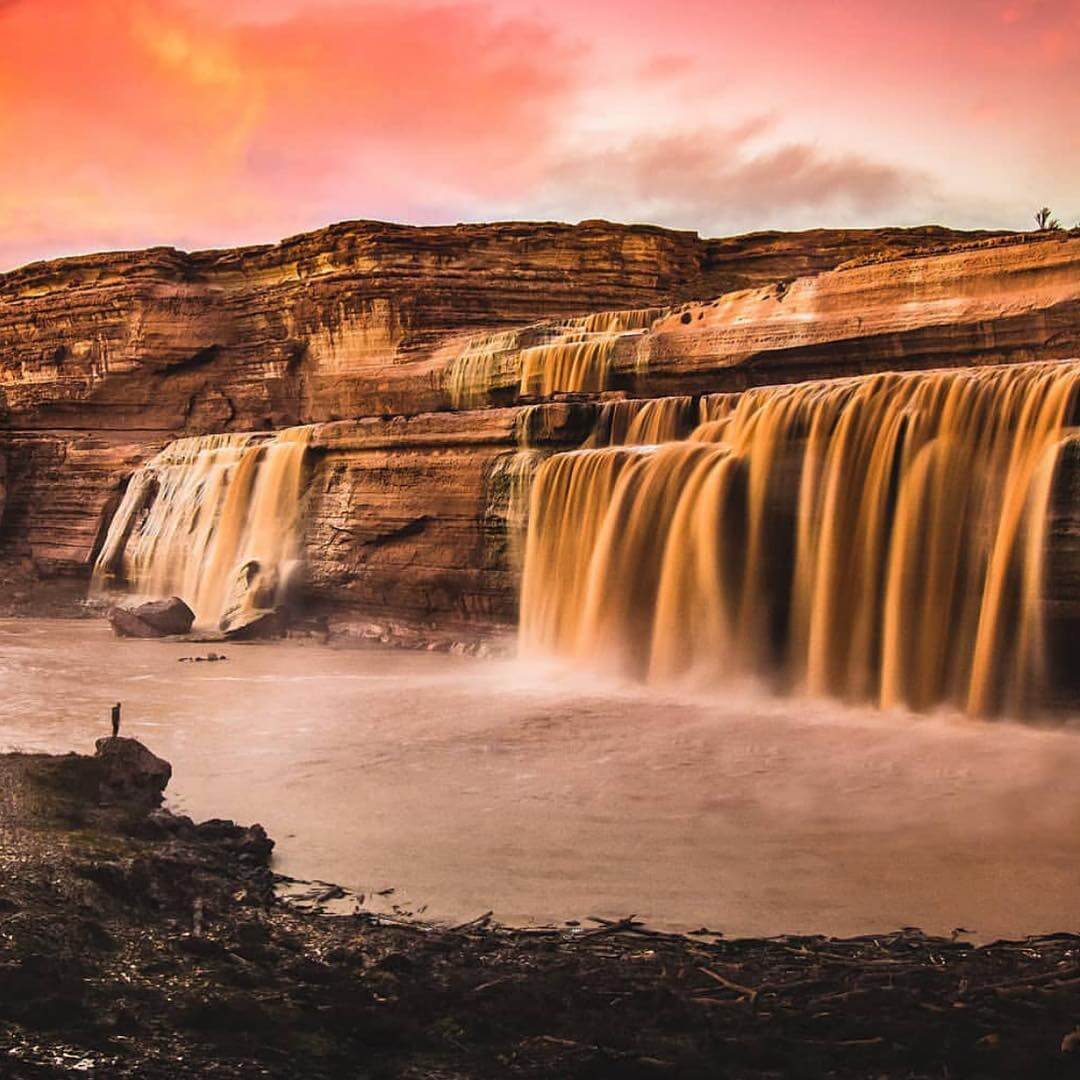 One of the cool large things in Arizona is Grand Falls, and it is famous because of its “chocolate” touch. The empowering background of the flowing chocolate waterfall doesn’t occur all year round. But once you see it in person, you’ll really be amazed by how awesome it looks. If you want to go, make sure to plan a trip during springtime around March to April. It is the best time because there’s a lot of snowmelt which makes the waterfall flow better. That will give the chocolate surprise you’ve been dying to witness. 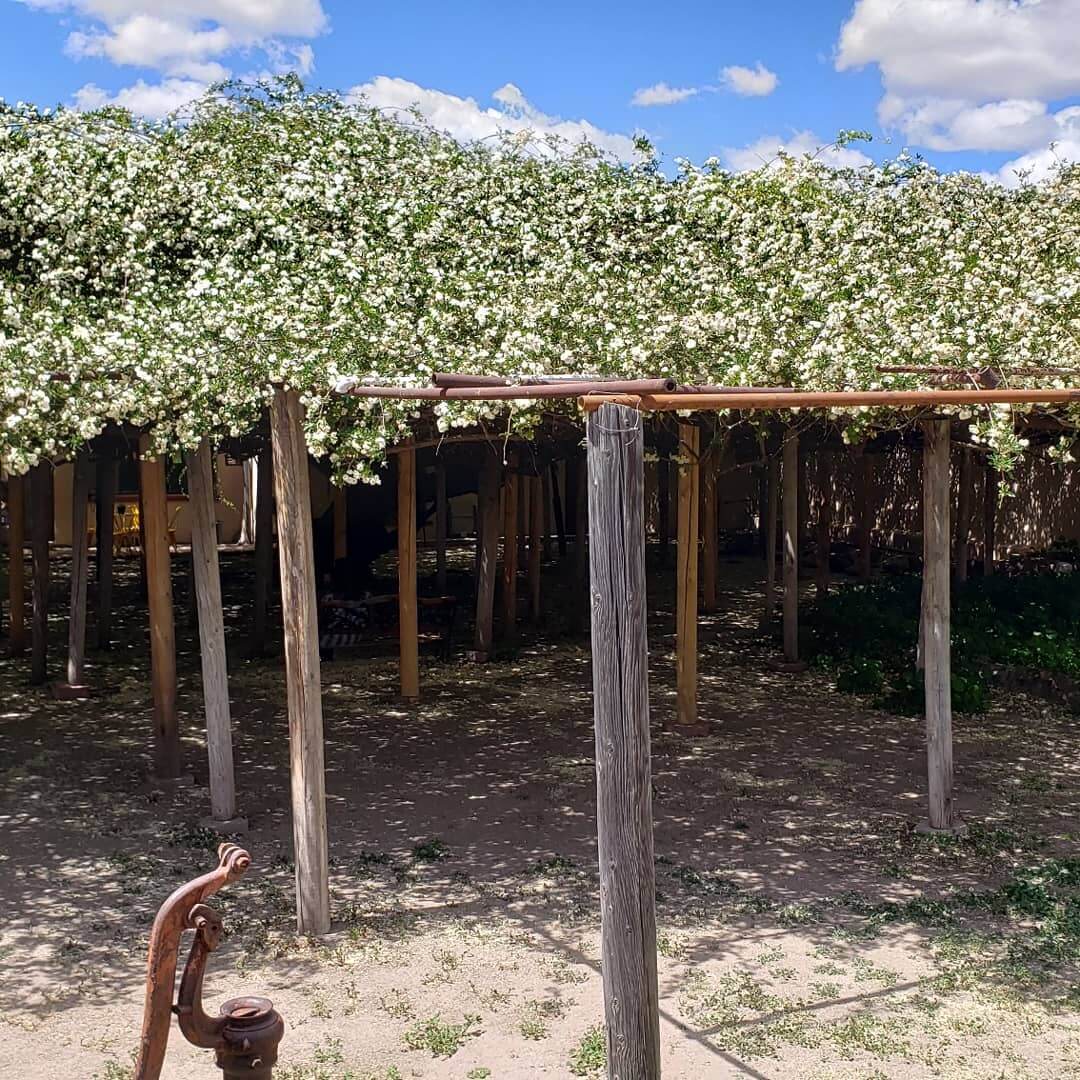 You shouldn’t leave Tombstone without first seeing the largest rose tree in the world! Many locals and tourists alike come to the Rose Tree Museum because you will find interesting artifacts from the past, and also take an unguided walk through the historic property.

The majestic rose tree packs a lot of years of history. Proprietress Dorothy Devere nicknamed it “Tombstone’s Original Shady Lady.” This is because the tree is a sanctuary and provides a cool and shady place to take a break during your visit to Tombstone. 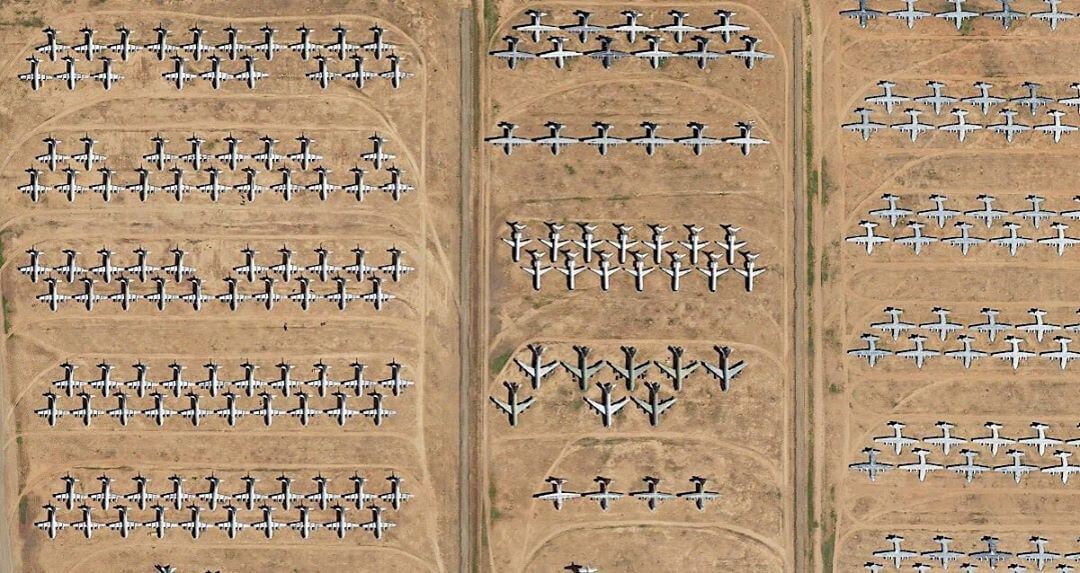 Where do airplanes go when they die? A huge bulk of these machines actually end up in Arizona. Davis-Monthan Air Force Airplane Boneyard in Tucson, Arizona, is the largest airplane boneyard in the world. Thanks to the state’s low humidity, high altitude, and hard alkaline soil, it is the perfect storage facility for the old airplanes.

12. The largest ice cream cone manufacturer in the world 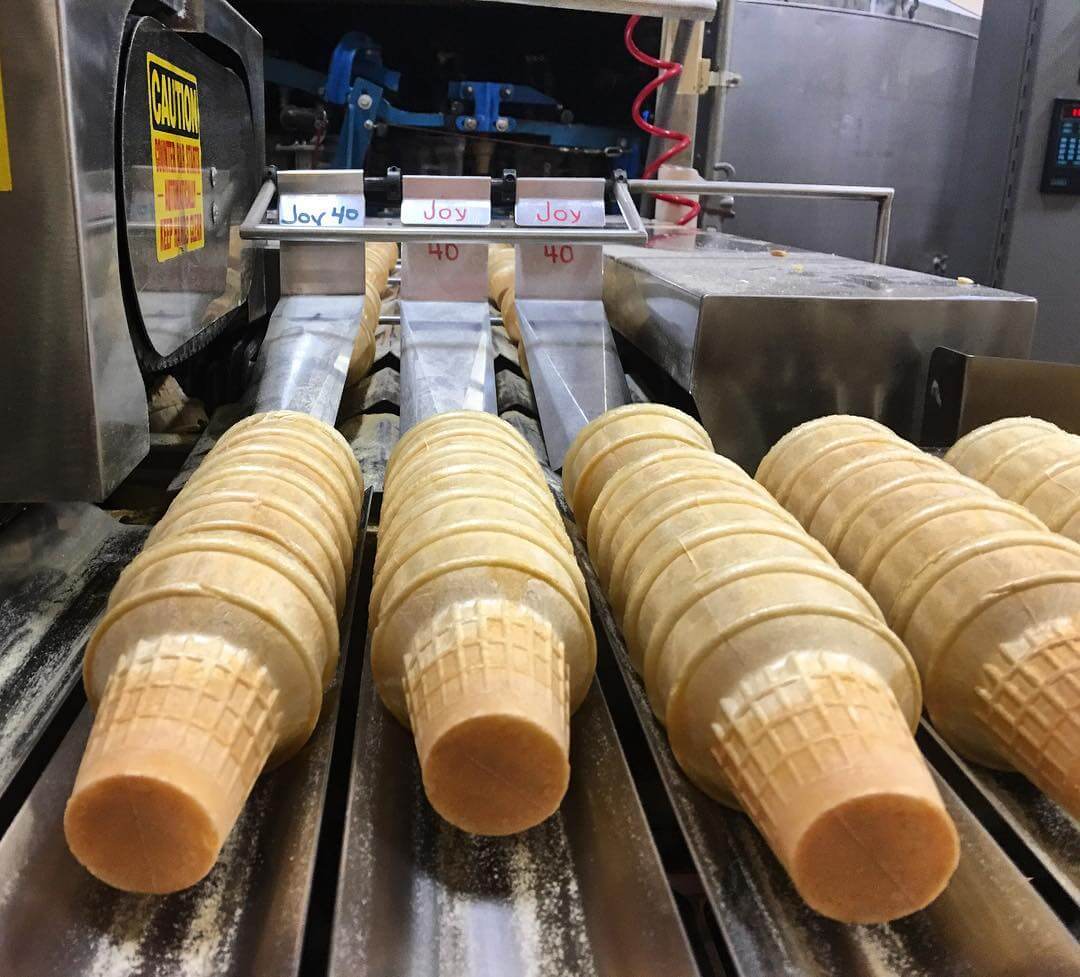 So what’s next in our list of cool large things in Arizona? The largest ice cream cone manufacturer in the world, Joy Cone, is also here! It was founded by Mr. George & Mr. Thomas, who were once partners in a small grocery store. They started a side business known as the George & Thomas Cone Co. When they became adept at running the machinery, they started the cone business and led it to its prosperity Many people will agree when we say that this cone facility is where the ice cream cone magic happens!

13. This “monster” that’s not really a monster 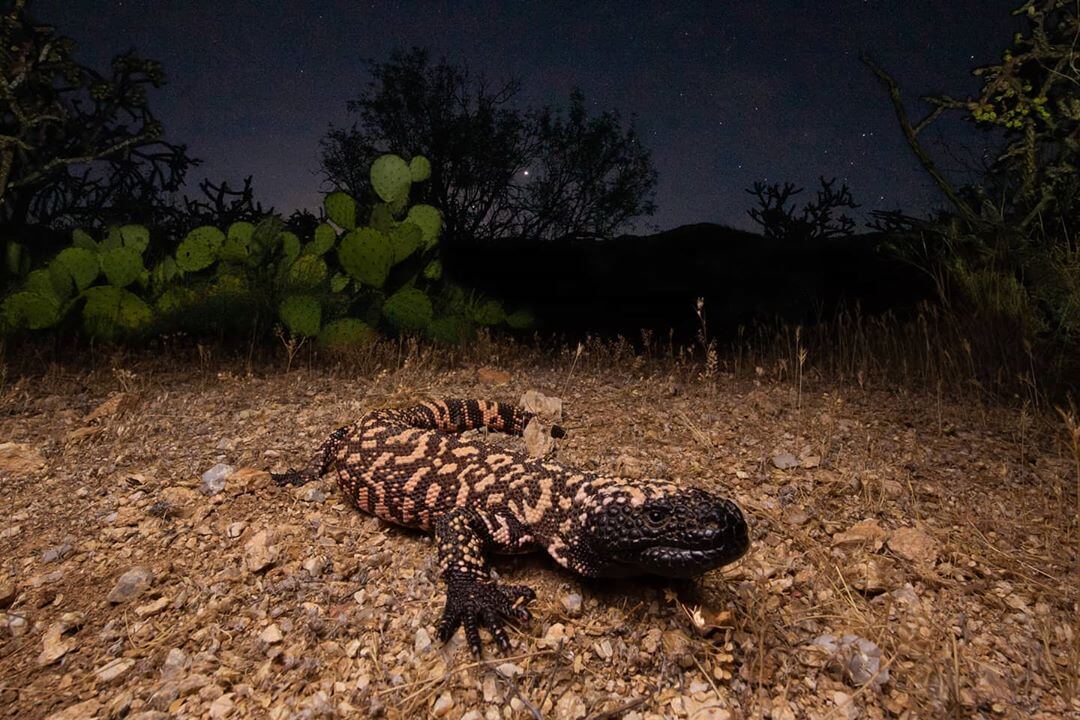 Some might say that a Gila monster is one of the weirdest animals in the state. It’s true. But let’s include this one in our list of large things in Arizona. Why? It’s a freaking huge lizard! A Gila monster is a large lizard with a face that looks like a snake. It can grow to two-feet long, and is also very venomous. It’s best if you keep your distance from this creature.

14. An artsy and cool whale mural 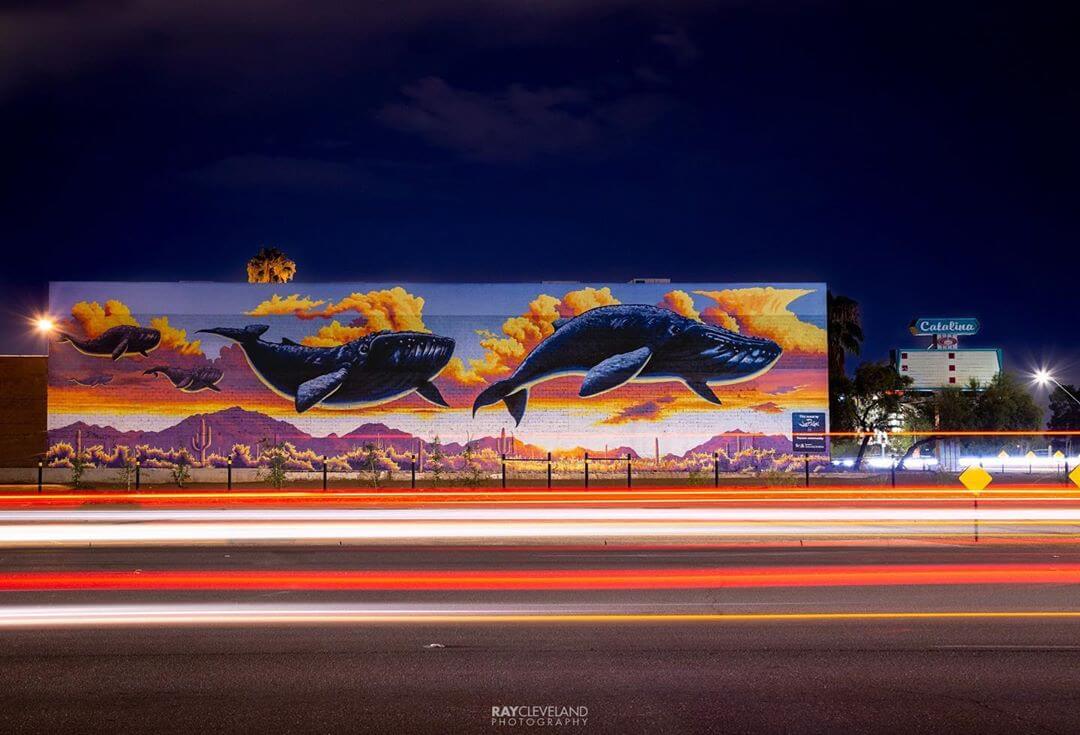 Visit Tucson to see many beautiful murals! It is also home to the 5,000-square feet whale mural painted by University of Arizona alumnus Joe Pagac. This creative work is Tucson’s largest mural and shows giant whales swimming over a desert. If you want to see this in person, you should come to 2320 N. Campbell Ave. 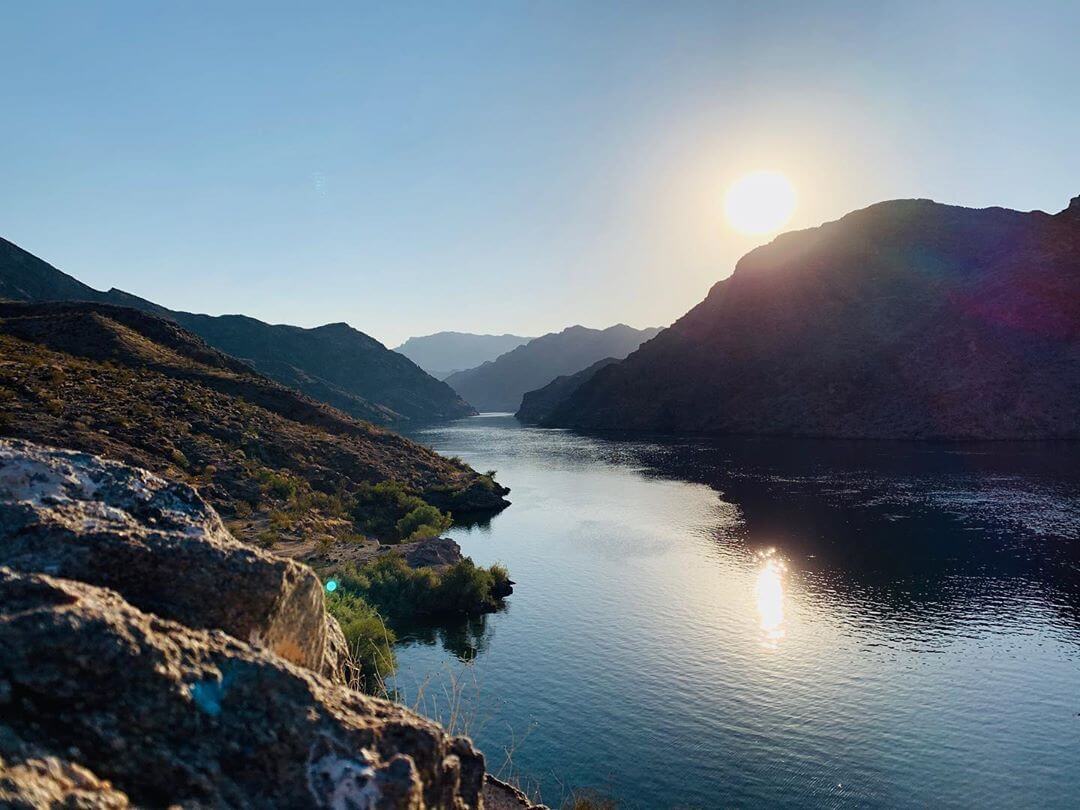 What exactly is America’s largest man-made lake? Well, it’s Lake Mead, the reservoir of Hoover Dam. It lies on the Arizona-Nevada border, 25 miles east of Las Vegas. You’ll be amazed by the fact that it extends 115 miles upstream! 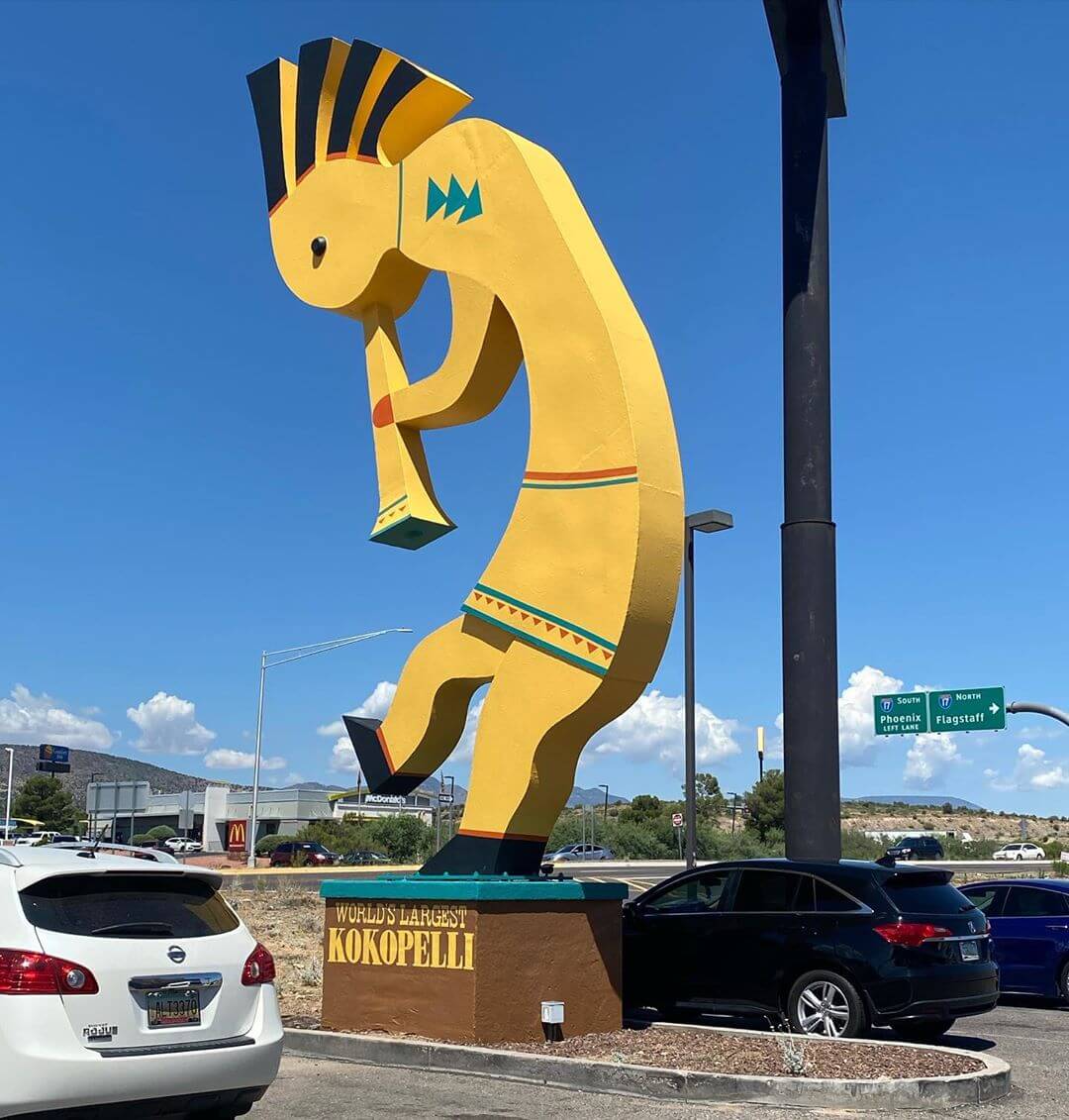 You can find the World’s Largest Kokopelli in front of the Krazy Kokopelli Trading Post in Camp Verde. Many people are amazed by it because it is 32-feet tall. In case you are wondering what a Kokopelli is, it is the Navajo Indian God of wealth and fertility! 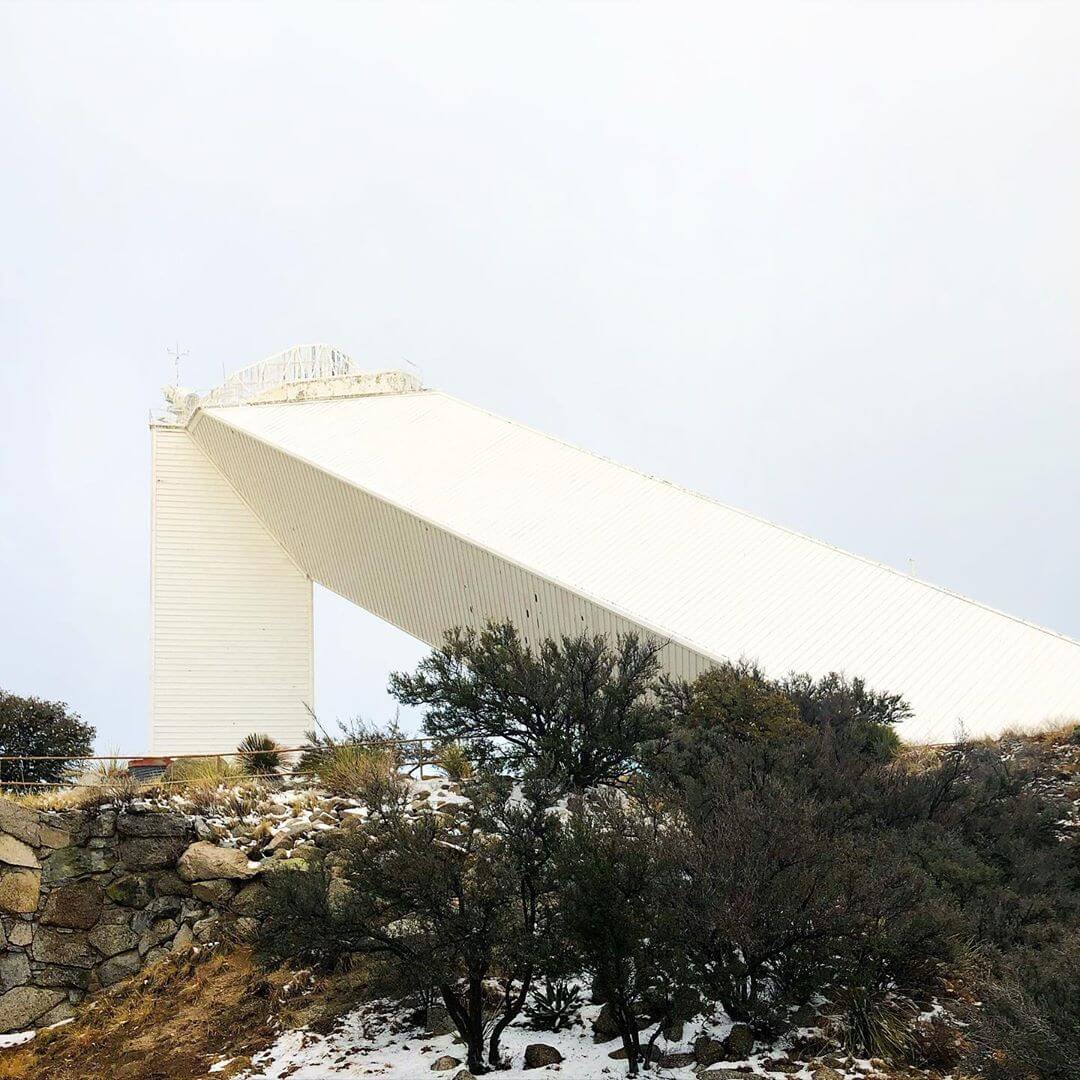 This definitely looks like a building rather than a telescope, but don’t be fooled! You can say that the big solar telescope at the Kitt Peak National Observatory is the place’s source of pride. It is revered by many astronomers since it greatly helps with solar research, or in investigating the nearest of the stars, our sun. 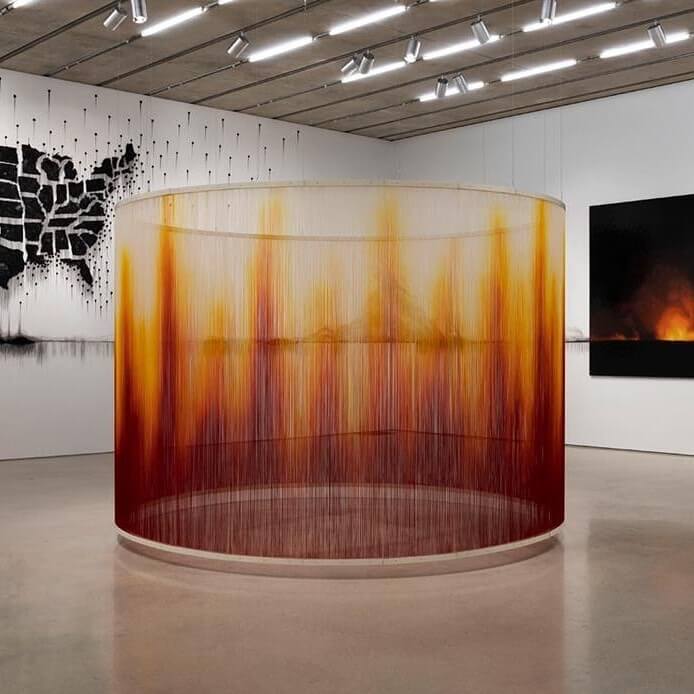 What is there to love about Phoenix? For starters, it is home to one of the cool large things in Arizona, and the largest museum for visual art in the southwest United States! The Phoenix Art Museum is 285,000 square feet (26,500 m2), and boasts a comprehensive collection of more than 18,000 works of art spanning from the Renaissance to the present. 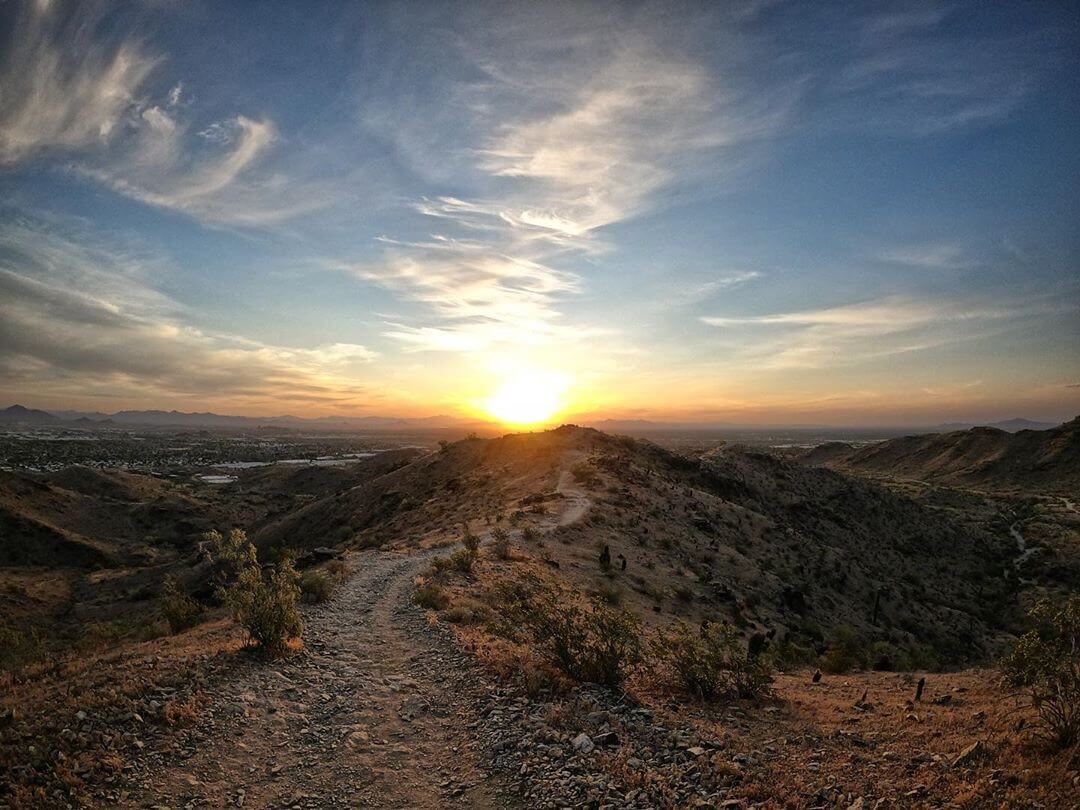 If you love going outside and staying close to nature, then you will love South Mountain Park. It is the largest municipal park in the United States, as well as one of the largest urban parks in North America and in the world. Don’t you think it’s amazing? You can enjoy more than 50 miles of trails, and see several stunning views at this 16,000-acre land. 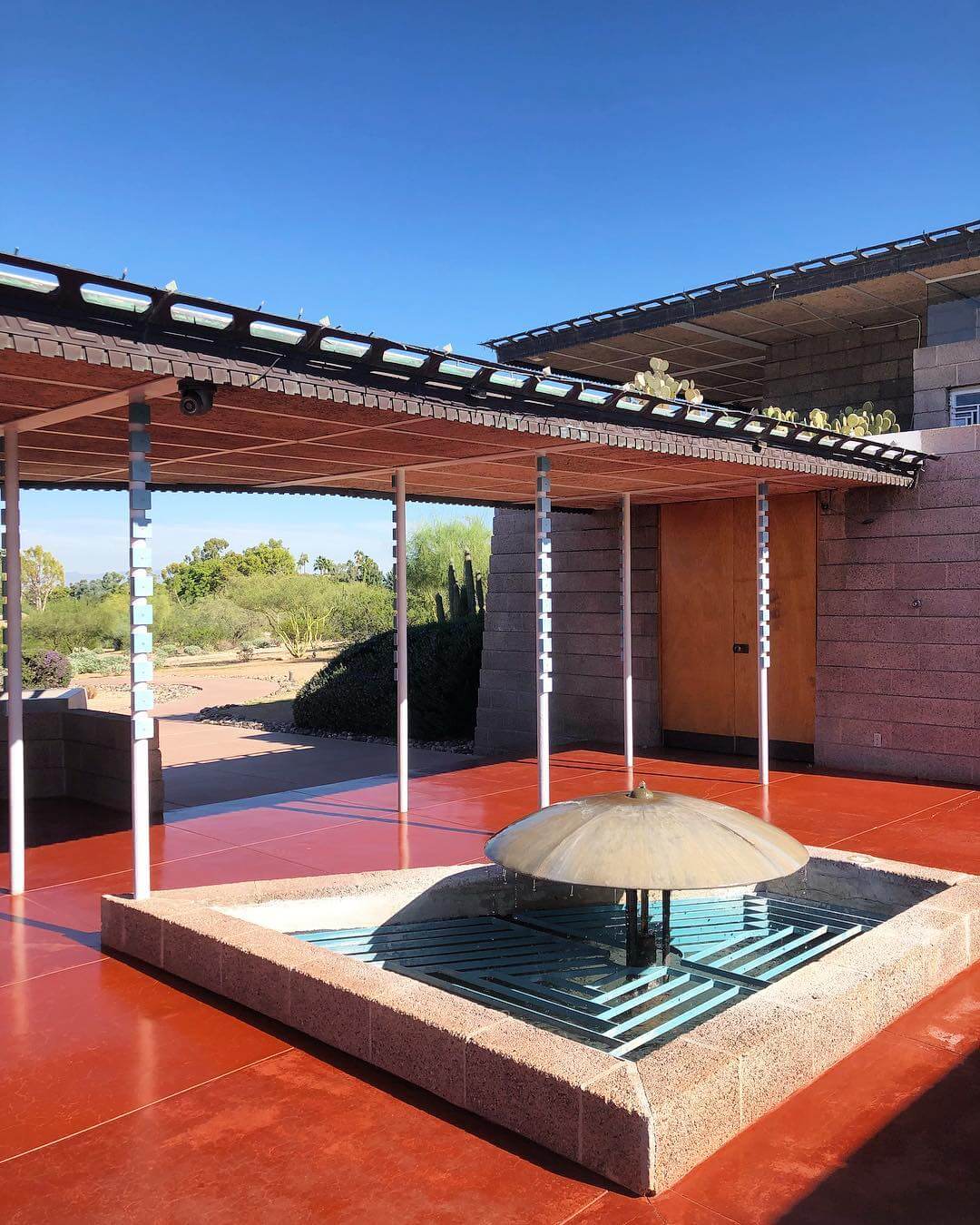 In Arizona, there are more than 10 buildings designed by renowned Frank Lloyd Wright. The biggest among these is the Harold Price house which is considered a true desert-dwelling. Not only is it a remarkable work of architecture, but the 5,500-square foot home is also the largest of all of Wright’s homes in Arizona!