So you’ve set your sights on a historic Route 66 road trip. You are probably expecting some weird or interesting roadside attractions that will really make you stop and explore the area for a bit. If that’s the case, you need to keep your eyes open for Cool Springs Route 66. It is a classic attraction that makes the road twice as awesome. Not to mention, nostalgia will never feel so refreshing than here! 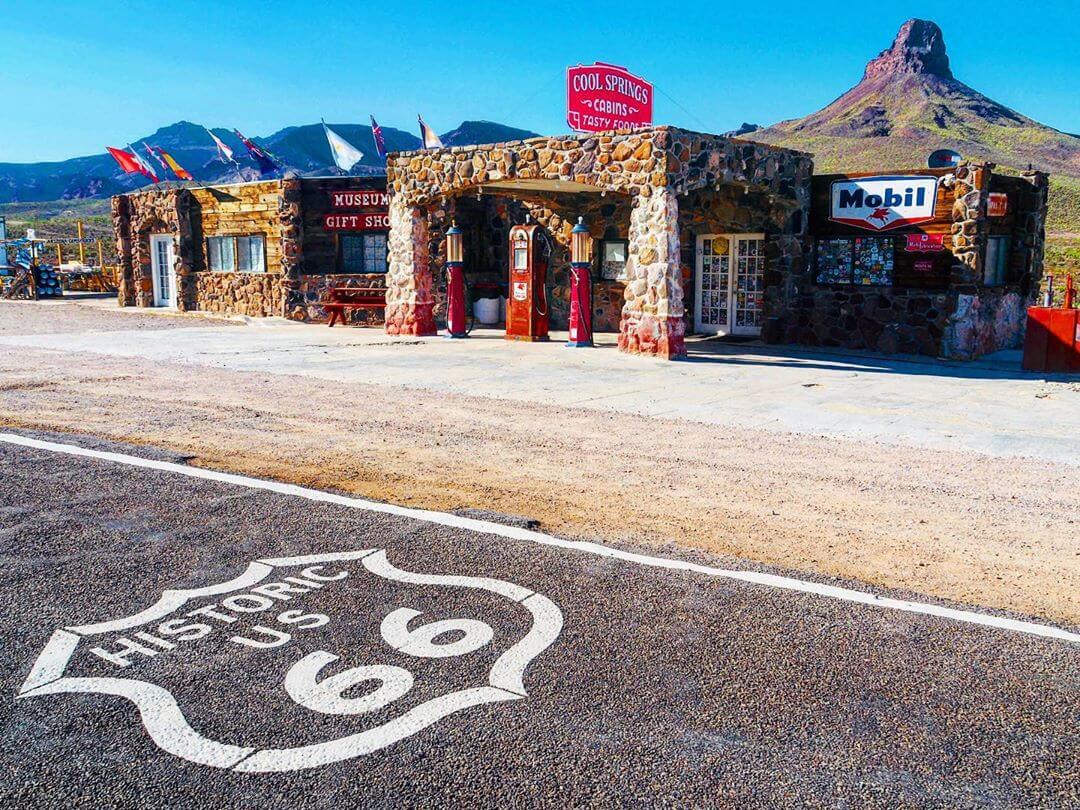 The beautiful thing about Route 66 is that there are still some preserved historic sites for you to explore. This destination is exactly that. It is a classic stop that is not only fun and eclectic but also something that puts you in a different world. Some visitors say you will be “out of the noise” when you reach this area.

When you are driving down the road and you begin to climb up the Gold Hill Grade towards Oatman, Arizona, the scenery will begin to change. You’ll see the ruins of an old gas station on the right stand, as well as a guardian at the entrance to the canyon. 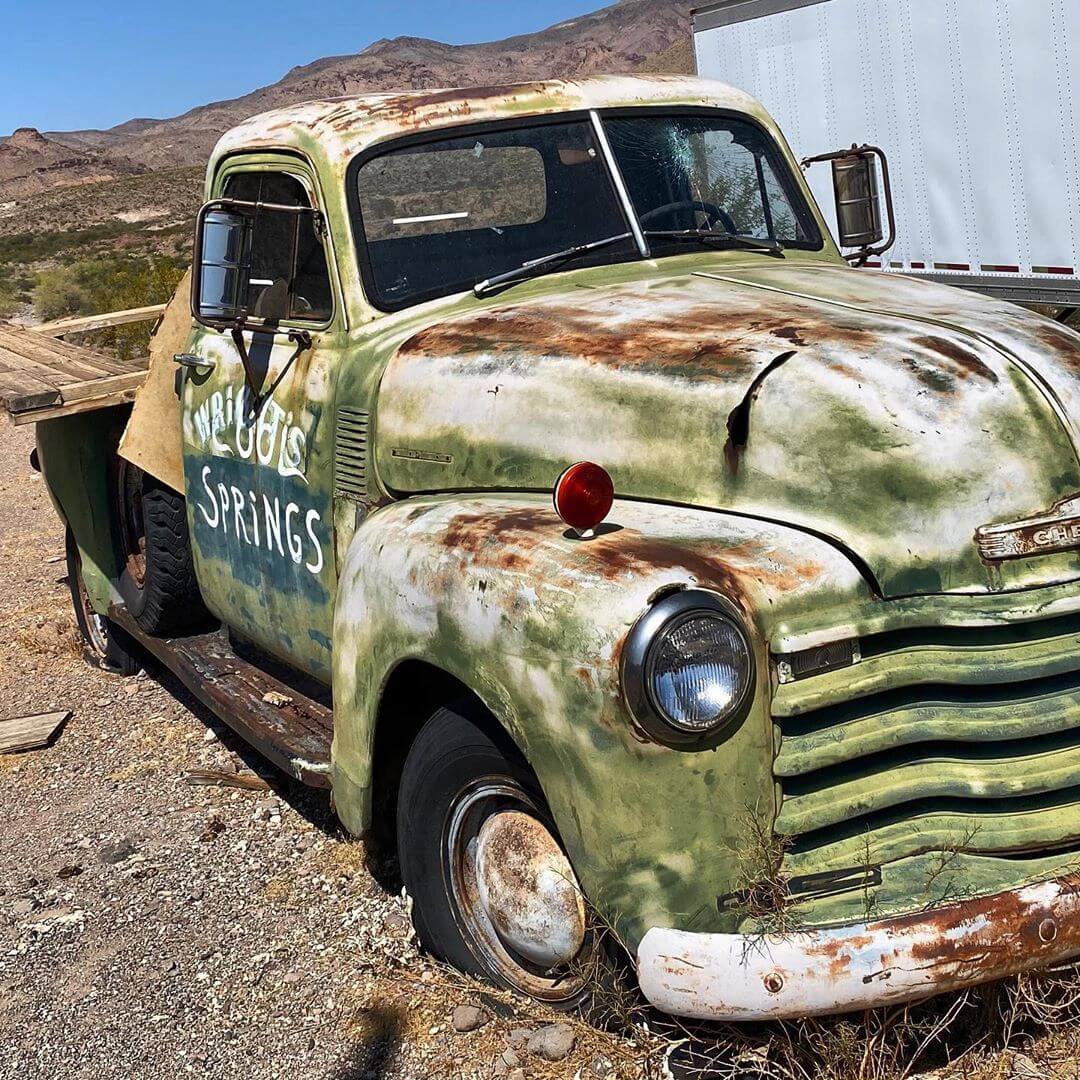 Your mind will just wander back in time to when the nation once moved and paused at this spot. There were many dramas that once played out so long by the people coming and going. But it seems time has stopped. Don’t you think this place looks like it belongs to the list of Arizona spots Disney’s “Cars” was based on?

You can learn about Cool Springs Route 66 from the people there. Everyone is just so passionate to teach you so much about the place’s past. Aside from history, there are awesome dudes who will even teach you everything you need to know about making jewelry.

The History of Cool Springs 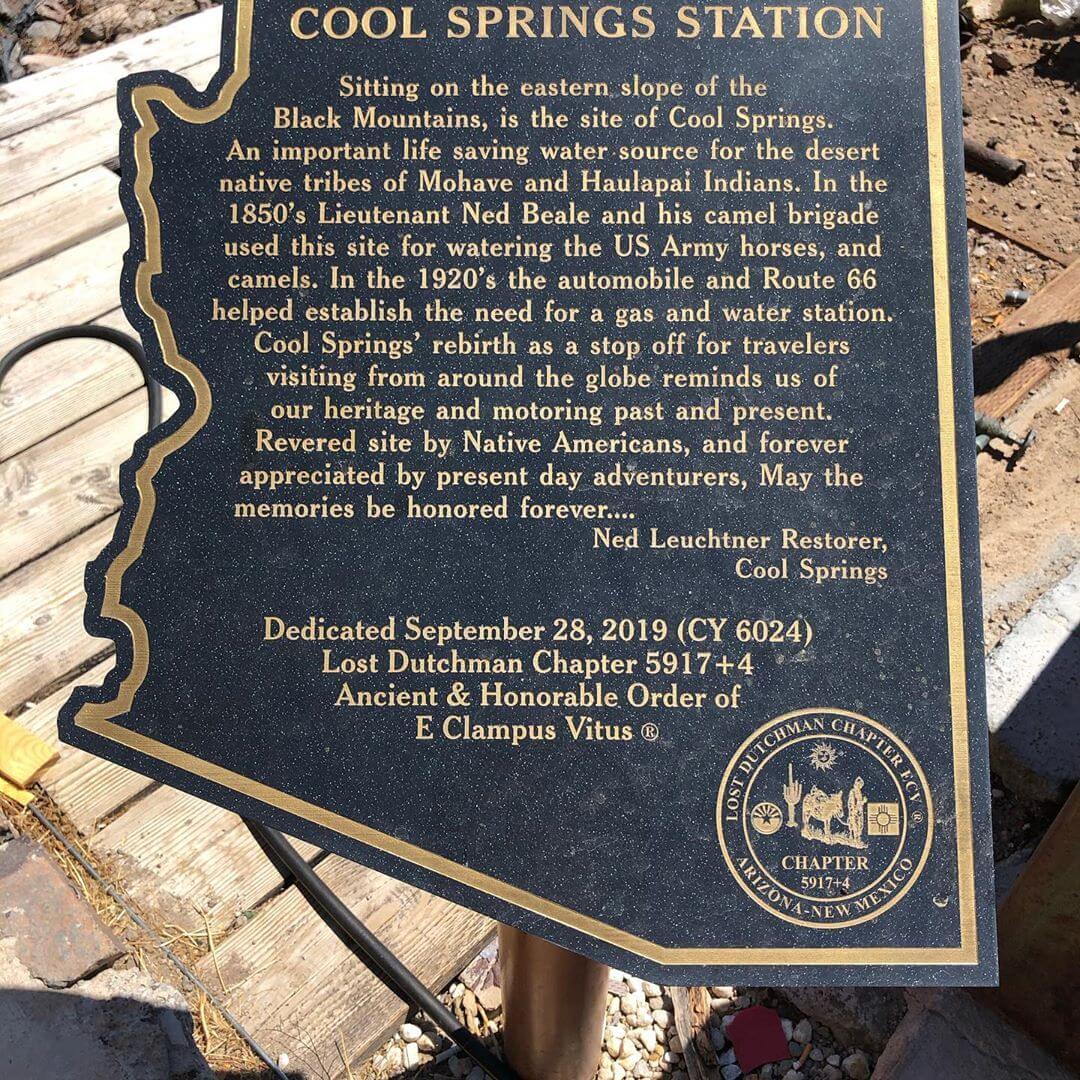 Back in the days, Cool Springs camp and service station was an integral stop for motorists traveling Arizona’s Route 66. Built in the mid-1920s, this area has been connected with Route 66 from the very start, reflecting the larger story of the historic Mother Road. When Route 66 faced a decline, this area suffered too. Some might say that the Cool Springs area is perhaps the most spectacular and unique stretch of the Mother Road. In fact, it is a must-visit for automobile enthusiasts and historians. You will find the area on the eastern slope of the Black Mountains, or the rugged range just along the Colorado River.

In the 1930s, a man named James Walker moved his family from Huntington, Indiana to live at Cool Springs. He built cabins, improved the station, and ran the operation while Mrs. Walker made some tasty meals and sandwiches. The kids helped out in the day-to-day operations as well.

When Mr. Walker returned to the midwest, he entrusted Cool Springs to Mrs. Walker. The place flourished even through World War II years, and after Mrs. Walker married Floyd Spidell. During that time, their chicken dinners became such a big hit for any Route 66 traveler in western Arizona. That was also when America went crazy over automobiles, pushing Cool Springs to enter its golden age. More Americans used the highways to travel to wondrous places or to relocate to California. 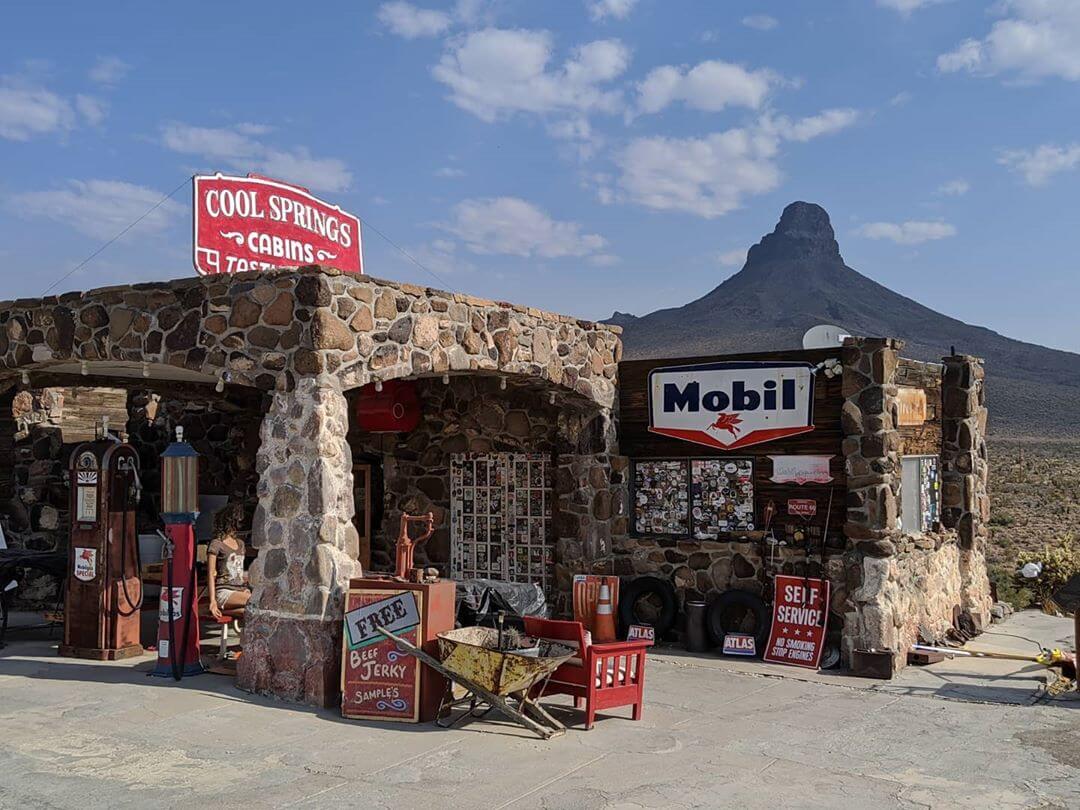 Roue 66 was the main highway of choice, and it brought such a huge wave of travelers through the fabled Southwest and right past the doors of Cool Springs. However, the traffic on Route 66 also had a downside. As the main route between Chicago and Los Angeles, you can only guess how busy the Mother Road was. It became a dangerous road and Sitgreaves Pass a particularly dangerous stretch.

Cool Springs was important during this time because it was a welcome stop for every weary traveler. They would check their automobiles before tackling the treacherous Gold Road Hill up to Sitgreaves Pass. Or, they would also just calm their nerves after descending the steep pass. Imagine traveling across the unforgiving desert only to meet a rugged mountain terrain. That’s really scary.

If you think about it, a stop at Cool Springs might have saved many lives. 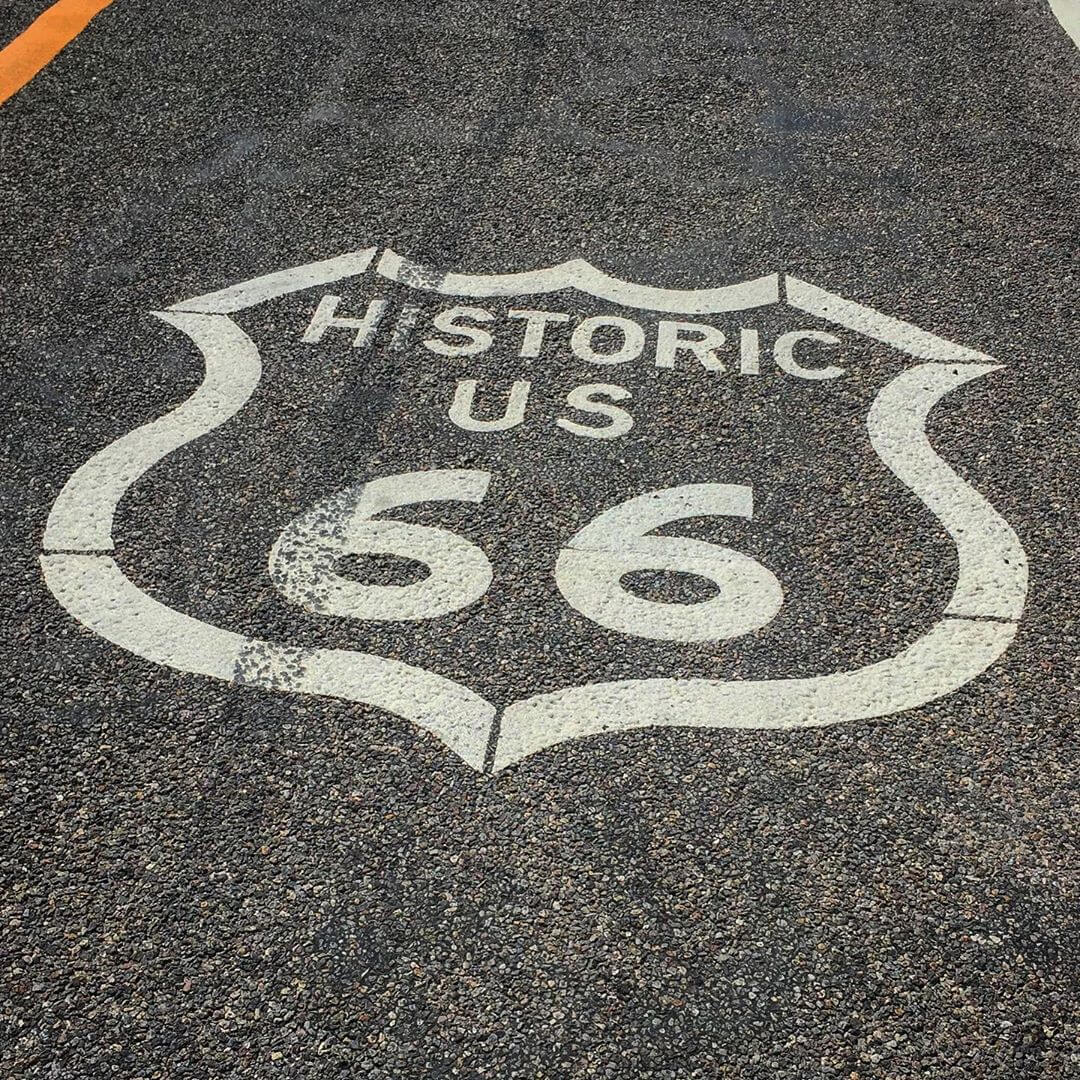 In the early 1950s, this part of the Mother Road was bypassed by a new straighter alignment of Route 66 through Yucca, Arizona. The new alignment did away with the need to traverse the steep mountain grades of Sitgreaves Pass. As it happens, it also bypassed the town of Oatman, Arizona, leaving the busy days of Cool Springs numbered.

Mrs. Walker decided to leave Cool Springs to Mr. Spidell, but since the upkeep of Cool Springs became increasingly difficult, he asked his niece, Nancy Schoenerr for some help. She moved with her husband, Chuck in 1957, together with their kids and Aunt Nettie. There, they serviced cars, sold gas, and prepared chicken dinners. This marked the beginning of the end of the old era because the era of Interstates had begun. In the mid-1960s, a fire ravaged Cool Springs to the ground. Nothing was left except for the fragments of the stone foundations and the original stone pillars. Hope seemed to shine a light on the place when Hollywood used it as a location for their movie “Universal Soldier,” but it remained to be ruined. 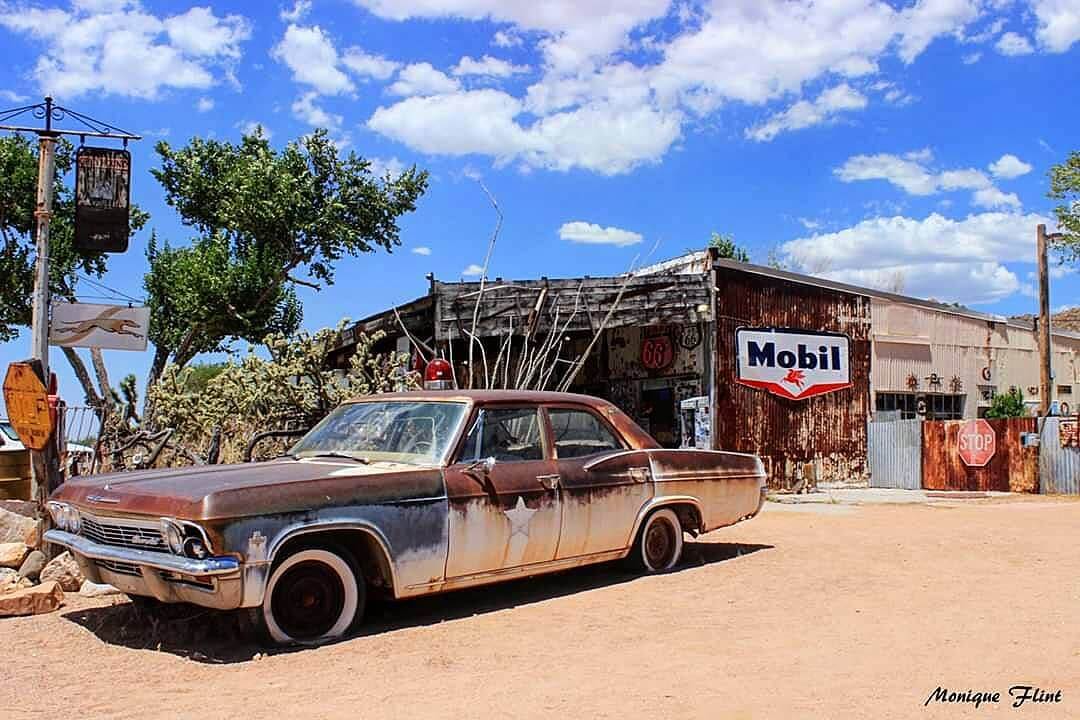 Fast forward to 1997, a man named Ned Leuchtner passed through the area and got inspired by its beauty, history, and majesty. He couldn’t help but investigate the forgotten relic of a simpler time. When he found the ruins of Cool Springs, he wanted to preserve it so more people can still experience a piece of history in the place. Leuchtner repeatedly tried to buy the property for three years but to no avail. Finally, four years later, the owner called and said she wanted to sell. She was moved by the man’s appeal to rebuild Cool Springs, and not just replace it with another development. From there, the rebirth of Cool Springs had begun.

In 2004, Ned and his team got power hooked up at Cool Springs Route 66. This marks the first time that the lights were on there since 1966! 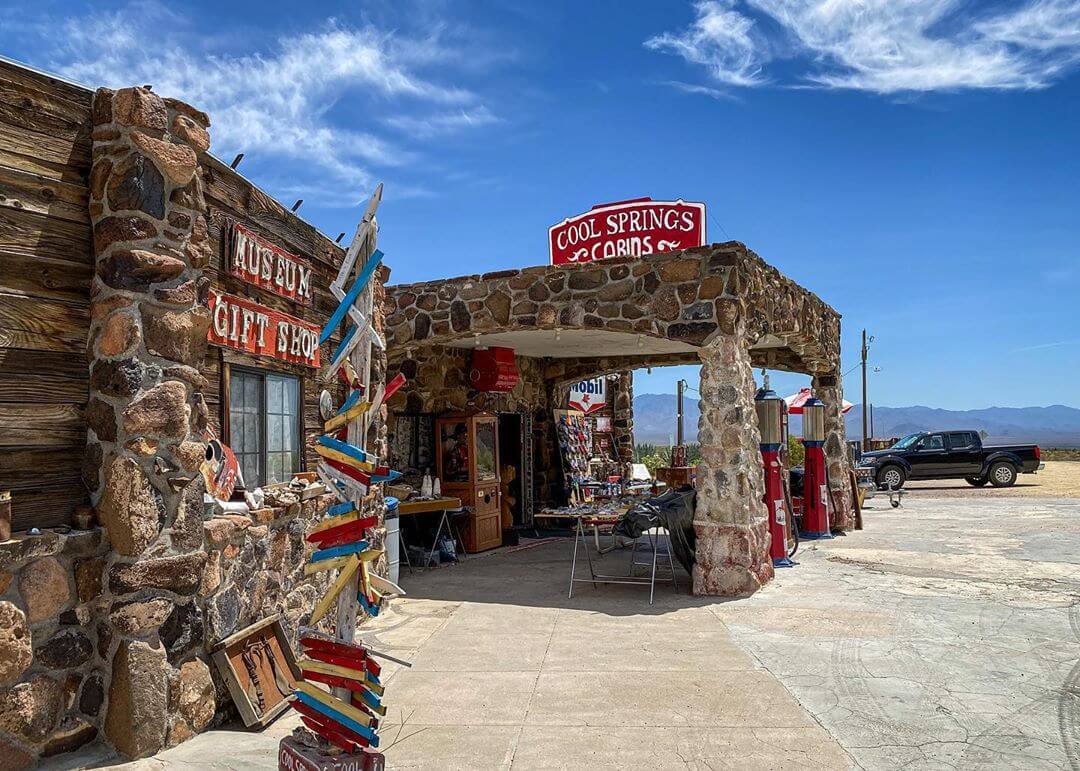 Today, the rebuilt Cool Springs station is now a gift shop. It offers many Route 66 souvenirs and even one-of-a-kind memorabilia. If you still don’t know when you can visit, you can visit their online gift shop for some unique purchases. After all, this is the only place to get them in the entire world! You will surely appreciate your experience here especially if you have an appreciation for the days of the past.

As for the future plans of this historic place, the owner wants to rebuild a replica of the famous cafe as a Route 66 Cool Springs Museum and Interpretation center.

Thanks to the efforts and heart of preservationists like Ned Leuchtner, the experience of old Route 66 will live on for future generations to enjoy at Cool Springs. 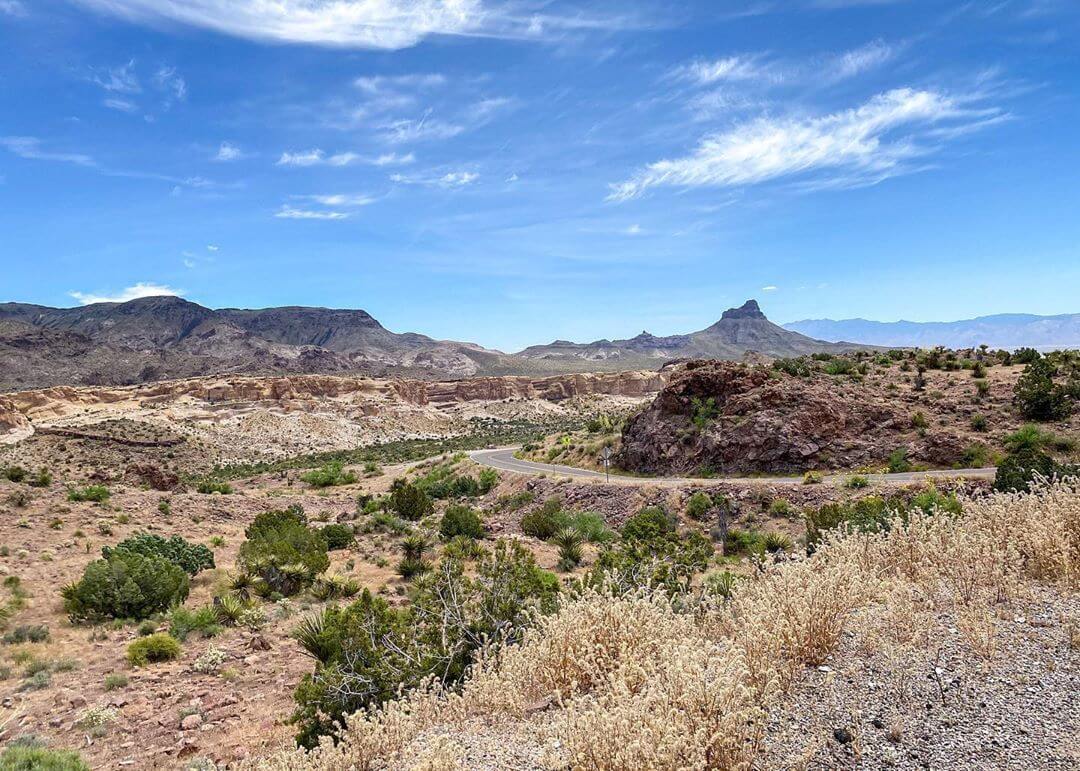 Did you know that the proceeds from the Cool Springs Gift Shop help support the rebuilding of Cool Springs?

Think of it as a win-win. You get to keep your own or surprise your loved ones with a souvenir you can only get from Cool Springs, and you’ll also be helping future generations enjoy this window into the past. Just take your pick from the items because there is something for everybody! 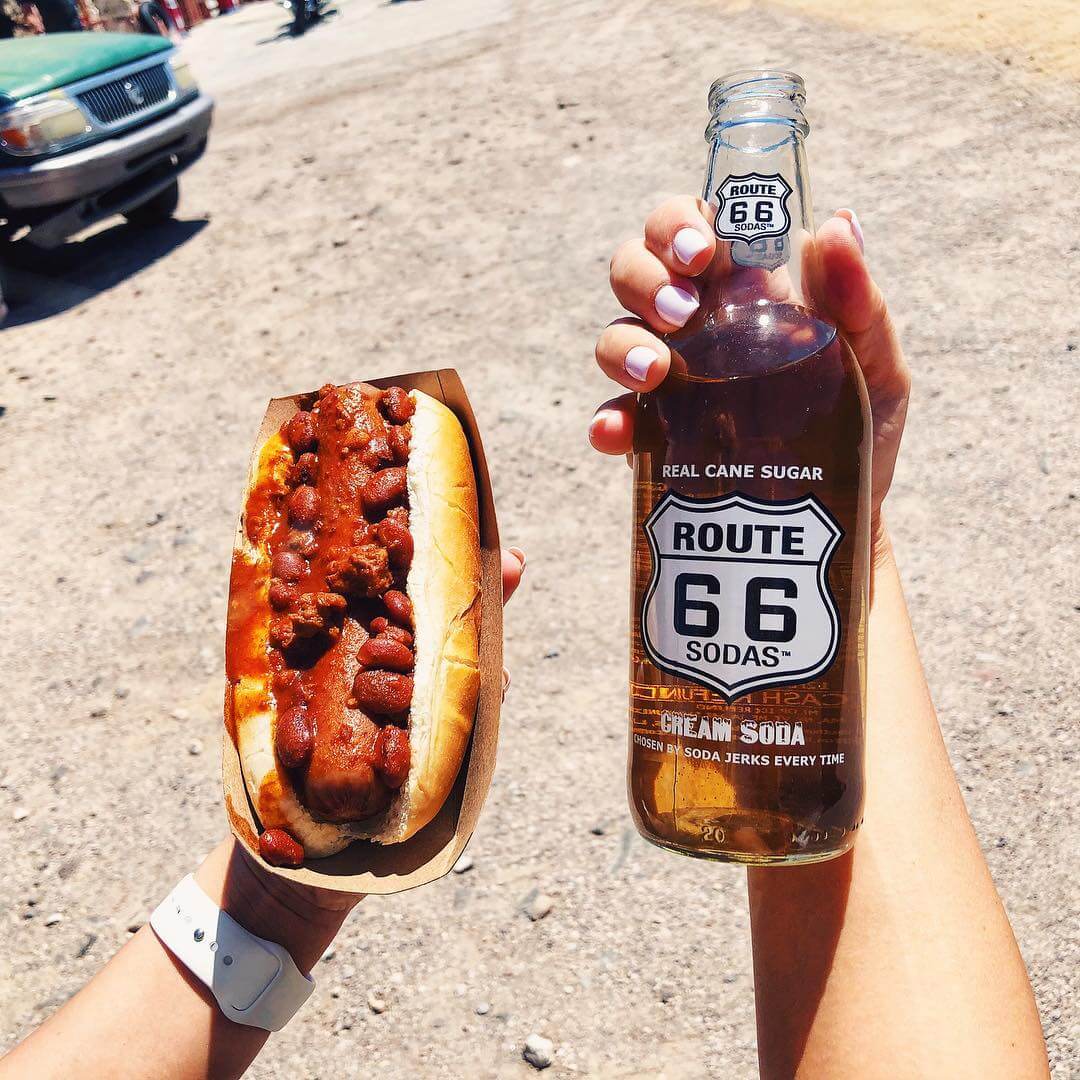 While you’re there, you can just grab a bite and a drink.

You should also visit the Cool Springs Memory Garden. The famous New York sculpture artist, Mike Kelly, was commissioned to do two sculptures for the garden, which were installed in May 2012.

How to get to Cool Springs Camp: This destination is located about 20 miles west of Kingman, Arizona on the Oatman Road (Old Route 66). Before the road climbs into the Black Mountains up Sitgreaves Pass to Oatman, look to your right to see Cool Springs.

This stretch of Route 66 is really unique. You can take your time exploring the area, so make sure you have your phone or camera ready because history is all around you. The wild burros can also be pretty stubborn so be mindful of them.

Does this place seem fascinating for you? Let us know in the comments below.

Before you go, read our article about 5 Roadside Attractions in Arizona that are a Must Visit. You might as well check out 11 Places in Arizona Every Other State Wishes They Had.