23 years ago, Arizonans witnessed the largest and one of the most mind-boggling UFO sightings in history. A V-shaped object the size of a commercial plane soared the sky, catching the eyes of many people because of its strange lights. The sighting soon became known as “Phoenix Lights,” and up to this day, there’s still more questions than answers.

The Mystery Behind Phoenix Lights 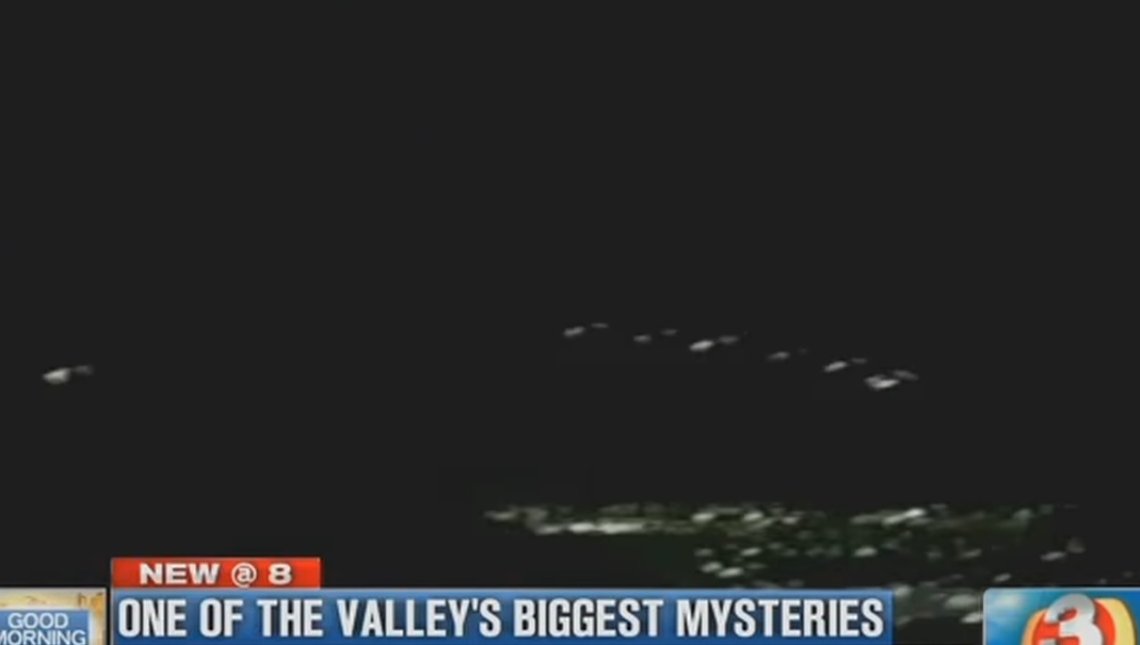 No one was prepared for the out-of-this-world sighting on March 13, 1997, when static flashes suddenly lit up the sky in an event known as the Phoenix Lights. People just looked to the sky and believed they saw something strange. Some witnesses say a triangular formation just passed over their homes, while others only saw a line of stationary lights. Still, there was one thing in common. They all believed the mysterious Phoenix Lights were actually UFOs carrying aliens.

During that eventful night, hundreds of Arizonans called the local law enforcement to report the series of strange lights in the sky. There were also some people from northwestern Arizona who began reporting a large craft passing overhead. The National UFO Reporting Center received its first call at 8:16 pm. The caller was a retired police officer in Paulden, Arizona (north of Phoenix) who claimed there was a series of reddish lights arranged in a V-formation above the sky.

That call was only the first of many. Other calls started to pour in over the next couple of days. Eventually, thousands reported the strange sighting over Arizona, Nevada, and part of Mexico between 7:30 and 10:30 p.m.

And of course, different witnesses meant different accounts of the sighting.

There Were Calls That State the Formations Were Arranged in the Shape of Boomerang, Tails, or Fireballs 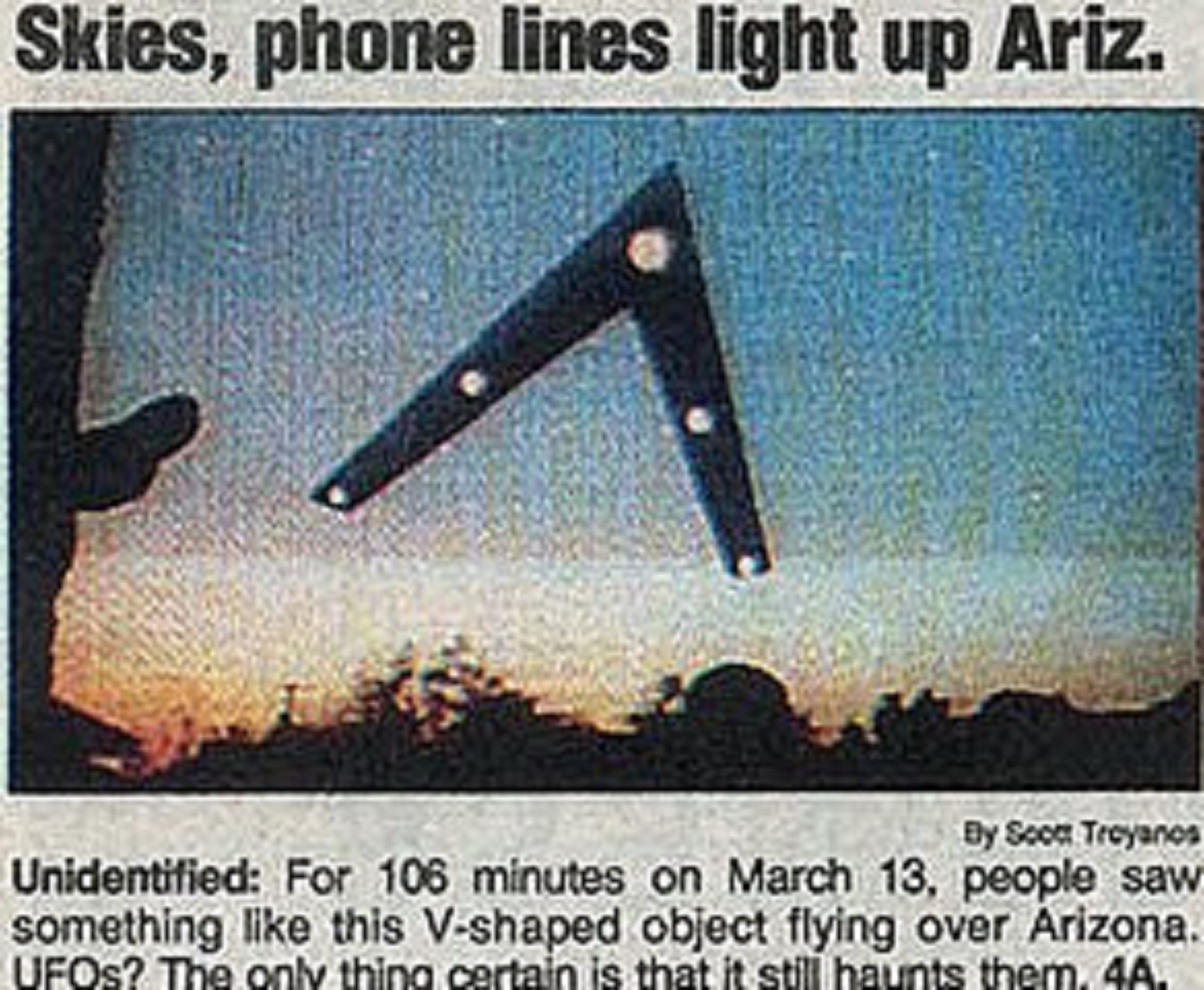 Here’s where it gets interesting.

A veteran UFO researcher with the Mutual UFO Network, Ron Regehr, told Motherboard in an interview that he helped develop the Defense Support Program Satellites (DSP). The DSP is a series of infrared sensing tactical satellites with the power to detect the space launches, missile launches, and even nuclear detonations. Apparently, Regehr generated regular reports about DSP detections every 60 days. He remembers getting a call saying the DSP picked up an object over South Eastern Nevada. It traveled in that direction until its signal became too weak. The next thing they know, it was lost over Tucson, Arizona.

Was it the Phoenix Lights?

Whatever It Is, It Blocked Out The Stars 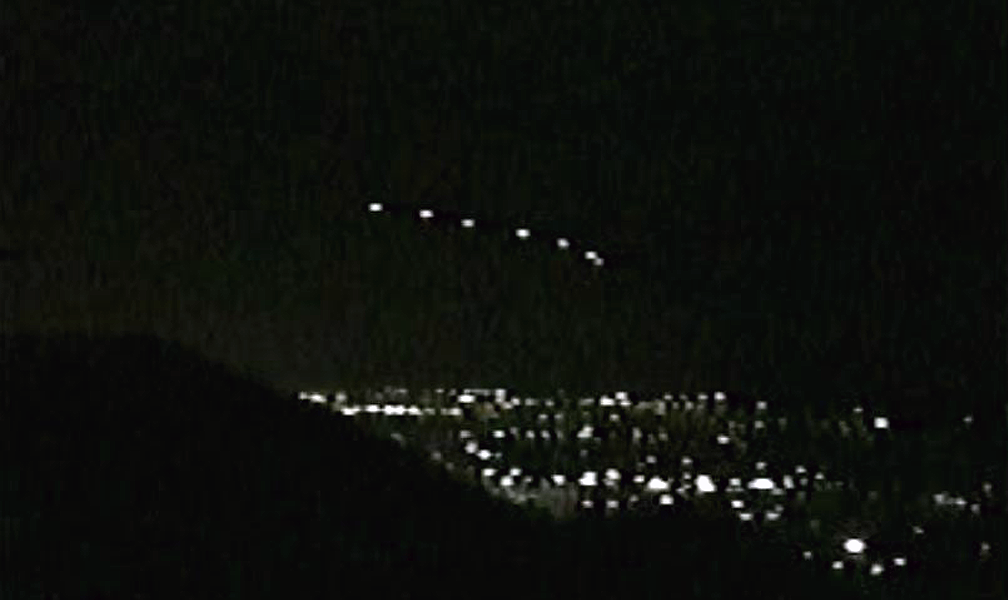 There’s no doubt that this event is one of the most infamous UFO incidents in history. It gained so much attention that it’s still being talked about today. Filmmaker Seth Breedlove discussed the event on the UFO community in his documentary series.

According to him, the event can’t be precisely explained. Some way it was an alien sighting. On the other hand, some believe that it was indeed flares from the Barry Goldwater Range, as identified by the U.S. Air Force. But every year, more and more witnesses come forward, citing what they saw that night. These witnesses include ordinary residents, military personnel, and airline pilots, with some coming as far from downtown Phoenix to Las Vegas.

There’s one witness from Prescott who said the boomerang-shaped object just glided over the Granite Mountain. It was huge, and probably at least a mile wide. He was convinced that there was no way it was from this planet. It was just as big as downtown Prescott, and completely blocked out the stars.

If you think about it, one event happening across the state for more than 12 hours is something to watch out for. Then-Governor Fife Symington first thought the Phoenix Lights was a joke, saying people are getting too serious and worked up about the stuff. However, he took back what he said, and revealed he actually saw the lights himself and they were of “otherworldly origin.” We know Arizona is home to many otherworldly places, but we sure hope the aliens don’t plan to stay here.

Symington added that he had knowledge about any machine that flies because he was a pilot. And the one he saw the night of March 13 was obviously bigger than anything he’s seen. 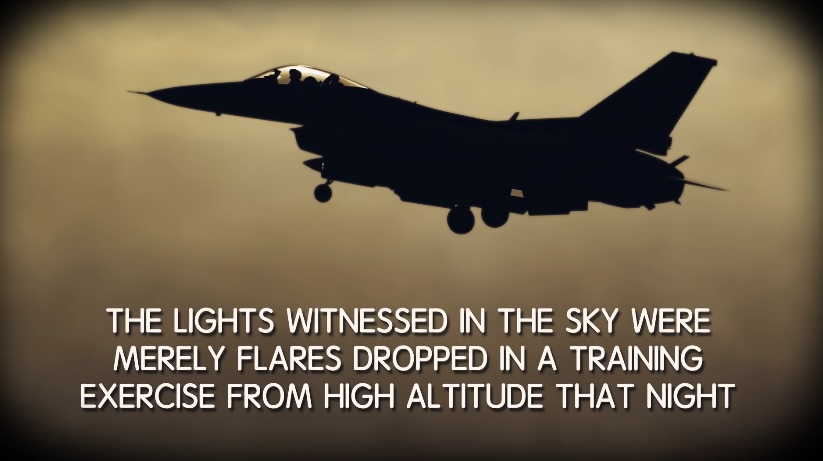 Since then, the U.S. Air Force said that the orange and red lights in the sky were the flares dropped by military aircraft during a training exercise at the Barry Goldwater Range. However, there’s still no explanation for the huge V-shaped object.

Reports state that UFO sightings are fairly common in the Phoenix area. In fact, the authorities receive reports of strange lights in the vast desert sky multiple times each year. Furthermore, a 2014 Washington Post article identified Arizona as the state with the highest number of UFO sightings per capita in the country.

What’s your take on the Phoenix Lights? Do you think it’s a made-up story? Or was it just a conspiracy used as a diversion tactic so people would keep their nose out of something? Perhaps, you can learn more about it in the UFO Museum in New Mexico.