One look at this beautiful chapel and you’d probably say, “Ooh! This is the perfect place to do a fun western wedding and quinceanera photoshoots!” While you are not totally wrong, there is an even more interesting history behind this place. Better known as the Elvis Memorial Chapel, this wedding chapel was originally just a movie prop!

The Elvis Memorial Chapel Was Made for Elvis Presley’s 1969 Charro! Film 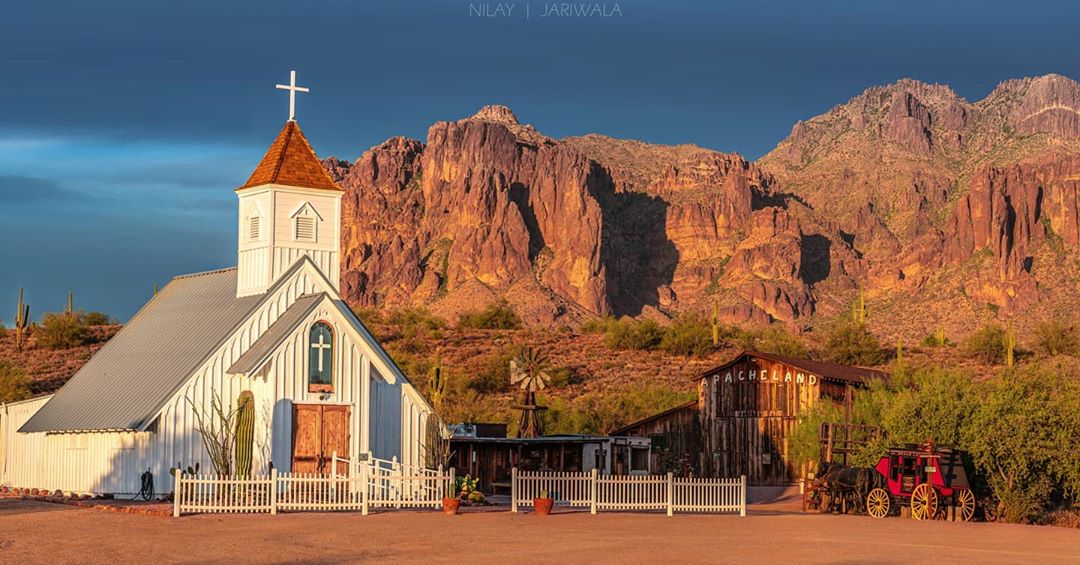 That’s right. This little chapel that reminds you of one of the world’s smallest chapels (Pause, Rest, Worship Chapel), is actually a movie prop that was built for the 1969 Elvis Presley western Charro!. The said film was the only movie Elvis made in which he did not sing. He played a strictly dramatic role in the film as a former outlaw who was falsely accused of stealing a cannon from Mexican revolutionary forces. He sets out to capture the real culprits, and later on, save the townspeople from them. 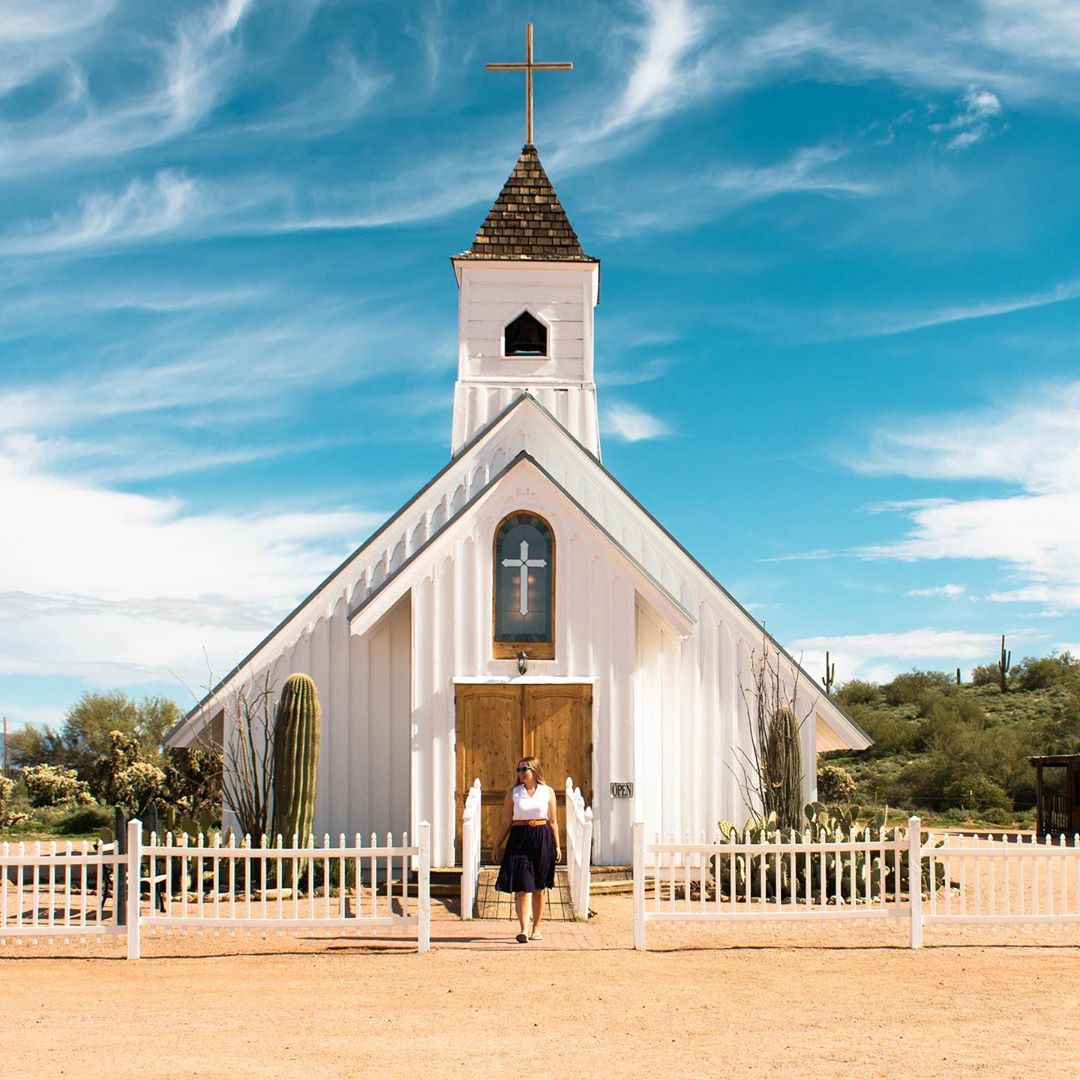 The Elvis Memorial Chapel originally stood at the Apacheland Movie Ranch, a once-popular film location and tourist attraction. This ranch was the birthplace of some of the good western motion pictures and television that came out during that time. Aside from Elvis Presley’s Charro!, some other famous motion pictures filmed here include The Haunted, Kenny Rogers as the Gambler: The Adventure Continues and Blind Justice, The Ballad of Cable Hogue, and Arizona Raiders among many others. On the other hand, there were also some television series filmed here such as Wanted Dead or Alive.

The film location suffered through two devastating fires in 1969 and 2004. Everything was mostly burned to the ground due to its mostly wooden complex of structures. A barn and the Elvis Memorial Chapel survived, but the ranch got closed. Eventually, the buildings were disassembled and moved on the property of the Superstition Mountain Museum.

The Elvis Memorial Chapel was donated to the Superstition Mountain Museum by Sue and Ed Birmingham.

What Can You Find Inside? 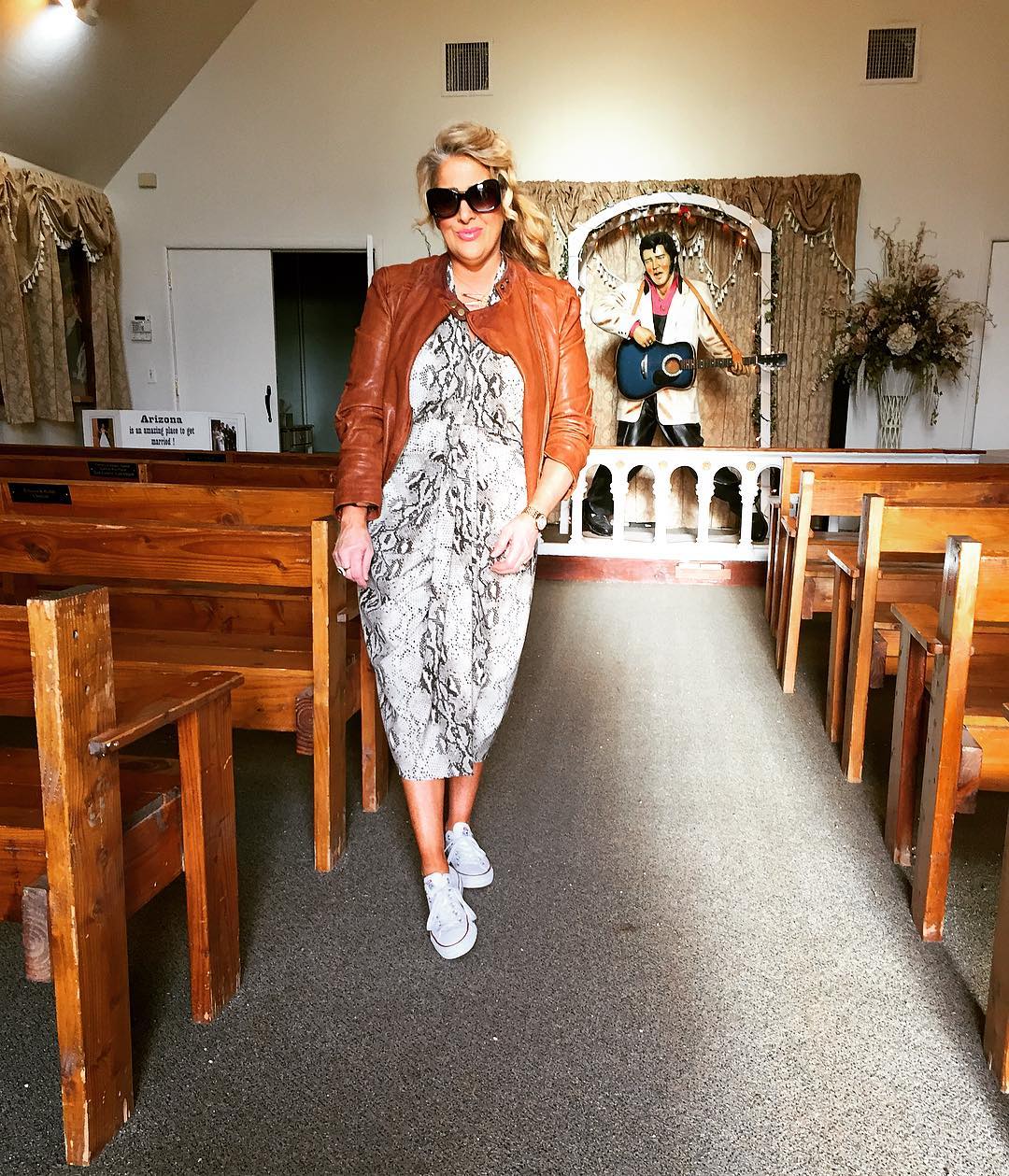 You’ve probably seen many exterior photos of the Elvis Memorial Chapel. But what can you find inside the small and unique chapel connected to the King of Rock ‘n’ Roll? You will see rows of wooden bench pews facing an altar, just like what you’ll find in a regular chapel. 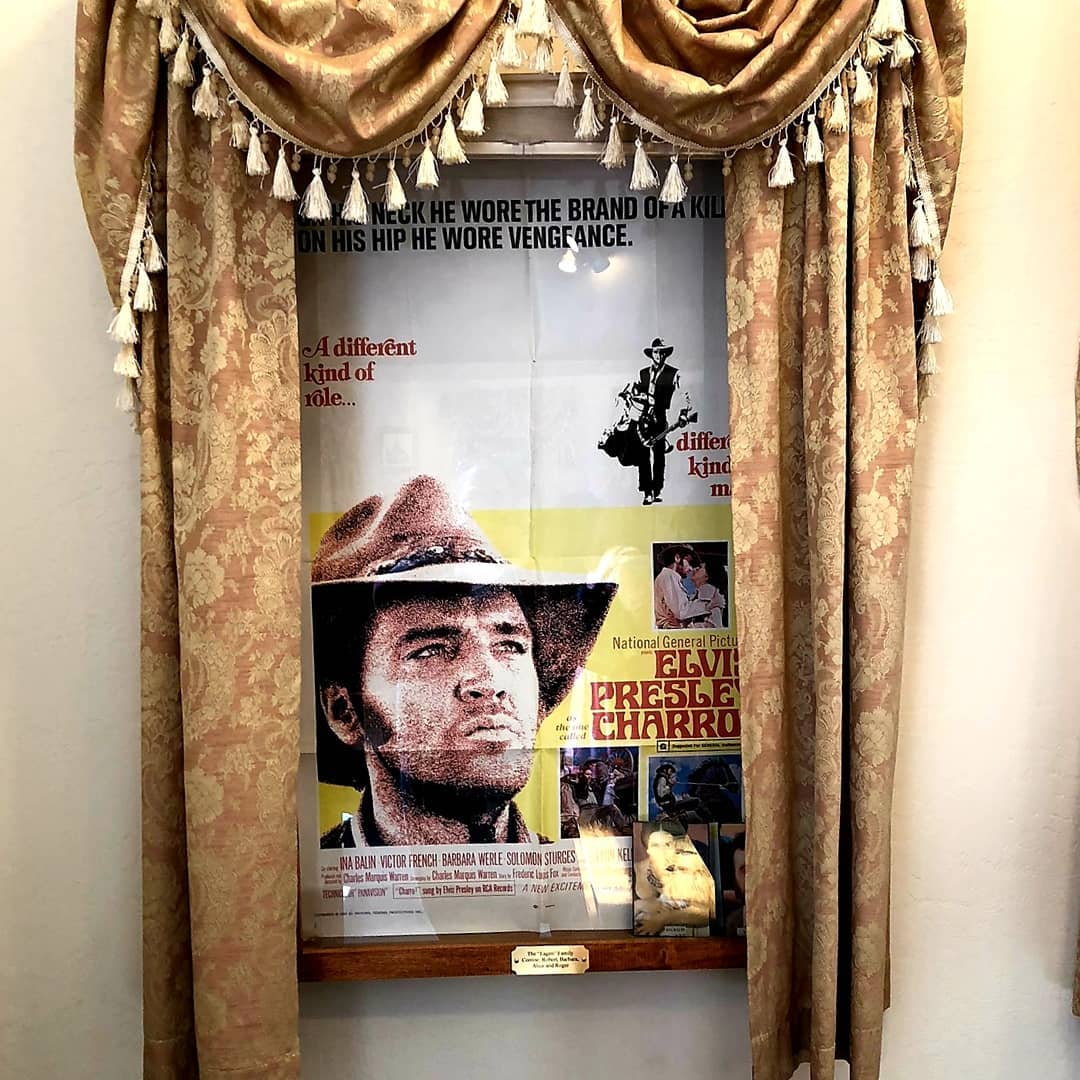 But of course, the walls of this place contain some western film memorabilia or posters from movies shot at Apacheland. If you’ve always been a fan of Elvis movies, or if you generally like old movies, then you will enjoy those pieces of history. Isn’t it exciting to visit a place where you can get married, and at the same time, display historical and interesting Elvis moments? 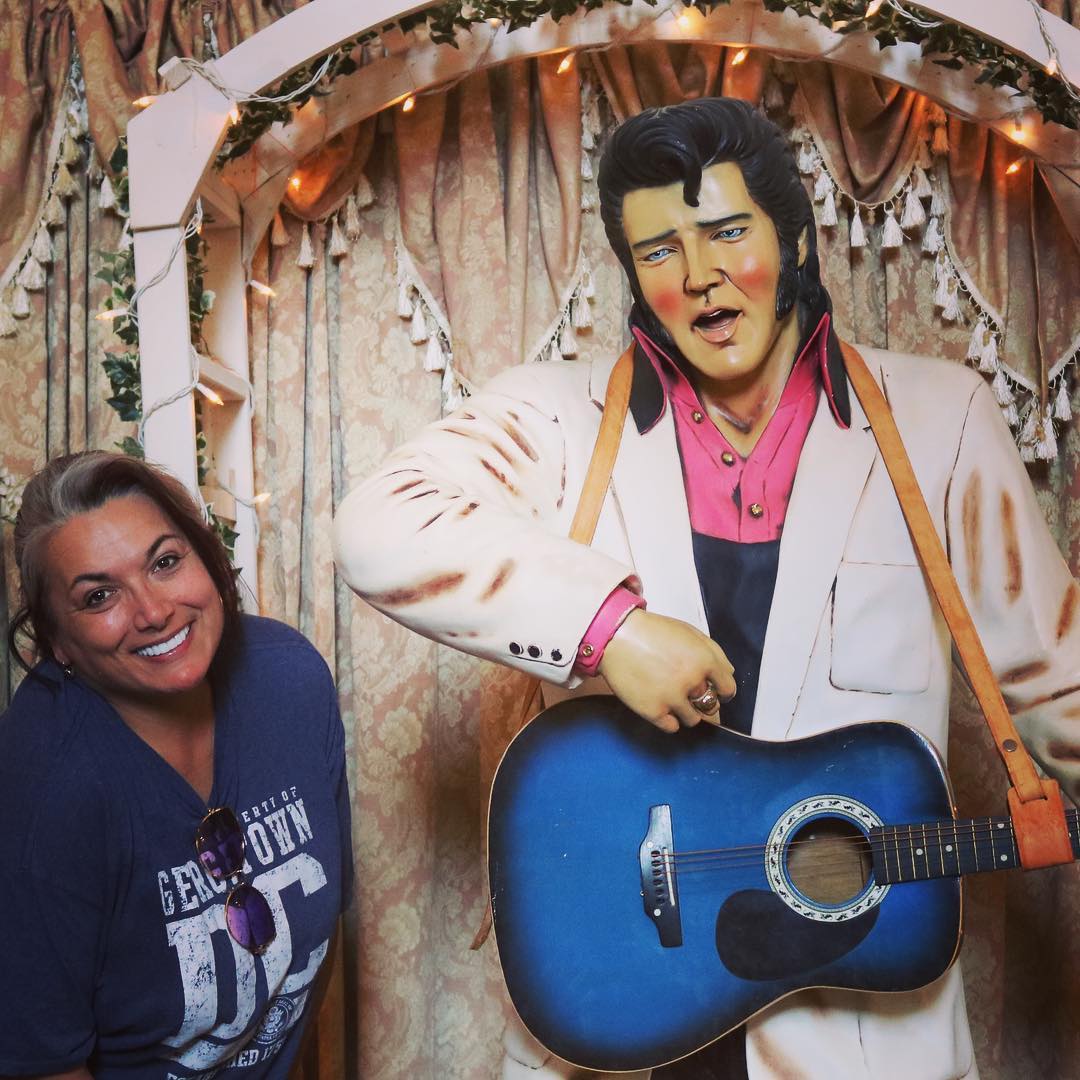 A life-size Elvis Presley figure seems expectant to gamely join you in your photos. Some say he can even be part of your wedding ceremony since the chapel offers “with Elvis” or “without Elvis” options. If you are a big fan, obviously, we know your answer would immediately be the former. Elvis singing and grooving to the beat of the music in a wedding can only happen in our dreams. Thankfully, in Arizona, your dream might just come true. What are you waiting for?

This Place is Definitely a Must-Visit!

Look around and enjoy the music they are playing inside. The good observers will notice that the music alternates with a bit of history.

There is also a concrete slab salvaged from Apacheland under the glass. According to accounts, this slab was discovered on a back trail in 2015 and donated to the museum. It contains the handprints and signature of the legendary Patsy Montana, the world’s first female country singer, and the first to have a million-selling single. You may recognize her as the artist behind the hit song “I Want to be a Cowboy’s Sweetheart.”

At one point, this chapel even displayed a vial of dirt collected from the ground next to the chapel where Elvis lay, wounded, and bleeding in Charro!. However, the current staff couldn’t recall that it had ever been there. The authentic feel of the Elvis Memorial Chapel is just too amazing. 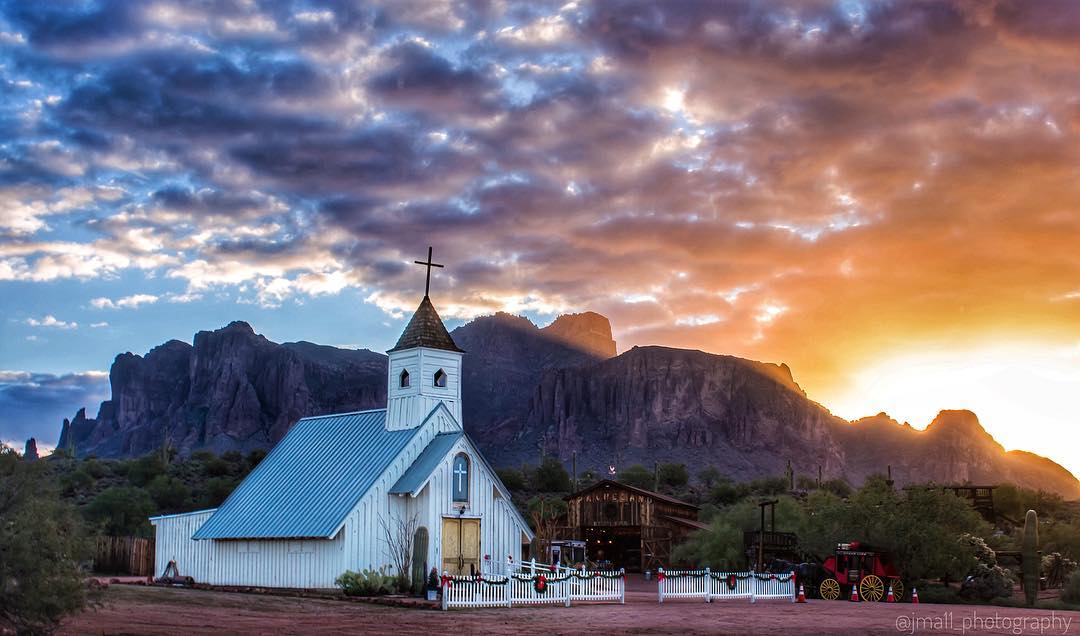 You can come here if you want to shoot your wedding photos, or if you want to see a movie prop used by Elvis Presley. Either way, there is no denying that the stunning backdrop and landscape can easily steal the scene with its beauty. There are plenty of things to look at in this place, and we know you will be in awe of it.

For those who plan to get married here, don’t think this is just like going to Vegas and getting married in the Elvis chapels there. There are many Elvis shrines that are often arbitrarily concocted for tourism. But this one is different. Compared to all those chapels, this one is a chapel he actually shot in. 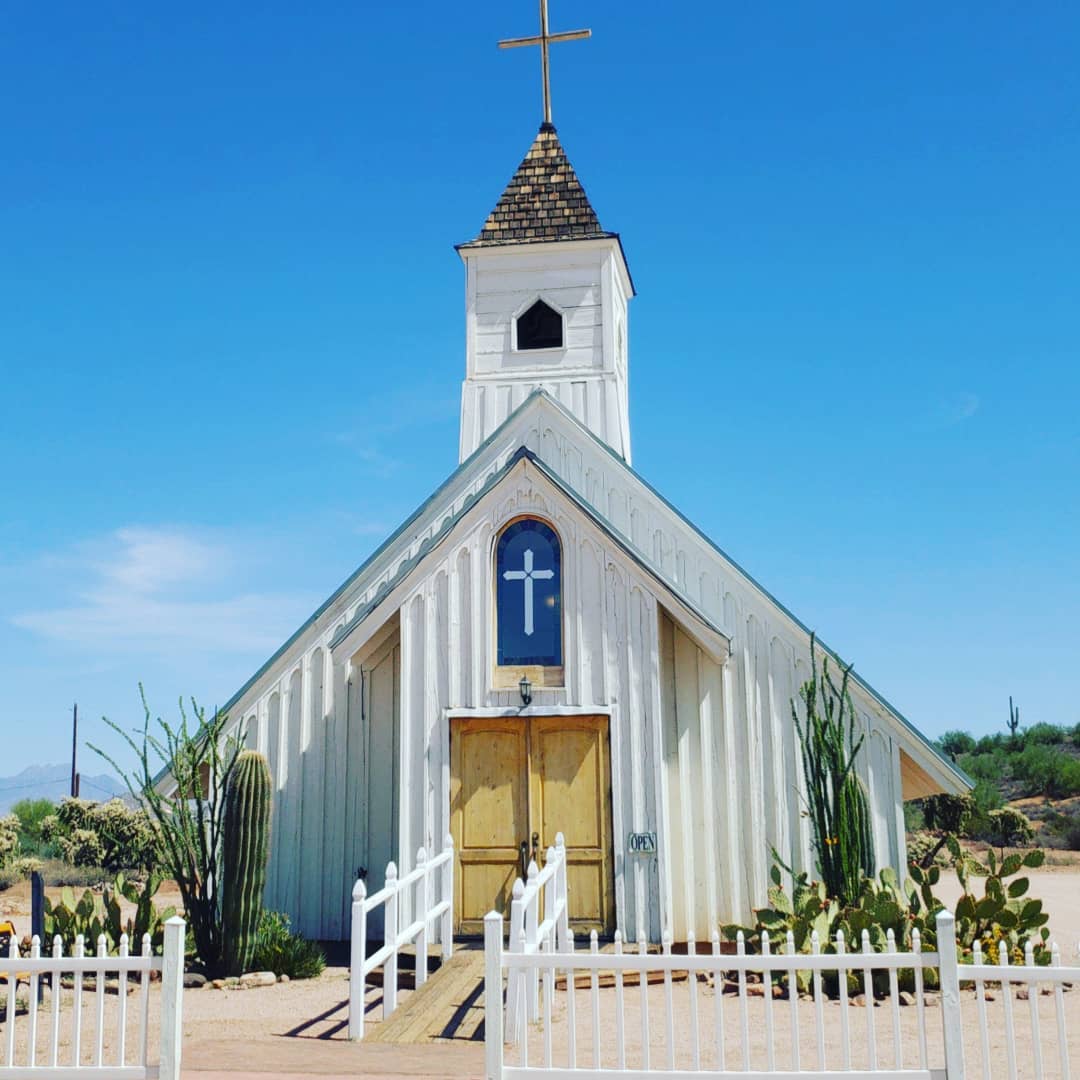 The chapel in the film Charro! actually gets blown up, but the actual chapel had some parts they could blow up so it wasn’t totally destroyed just for the scene.

Elvis Presley never set foot inside the chapel. It literally just blew up. If you think about it, this proves that the popularity of the King of Rock ‘n’ Roll is crazy for drawing in a crowd like that despite not really spending some time inside the place.

Lastly, if you want to book your wedding at Elvis Memorial Chapel or conduct a photo shoot, you may get in touch with their staff at 480-983-4888 Ext. 103. Alternatively, you may send an email at assistant@superstitionmountainmuseum.org.

Have you been to the Elvis Memorial Chapel? Share with us your experience and photos!

You might also be interested to check out this beautiful 19th century Franciscan mission considered as one of Arizona’s prized architectures. There is also the amazing Catholic Church in Sedona that will seriously leave you in awe.