Arizona is not just a land of natural wonders. Apparently, it is also home to some of the smallest places in the world. If you can still remember our article on a tiny church in the middle of a crop field, or the world’s smallest museum, then you will like this! Room 4 Bar Bisbee is a unique, chill, and small hang out spot that you and your friends should try right now! Many people say that this is the best-kept secret of the city. Do you want to know why? Keep reading. 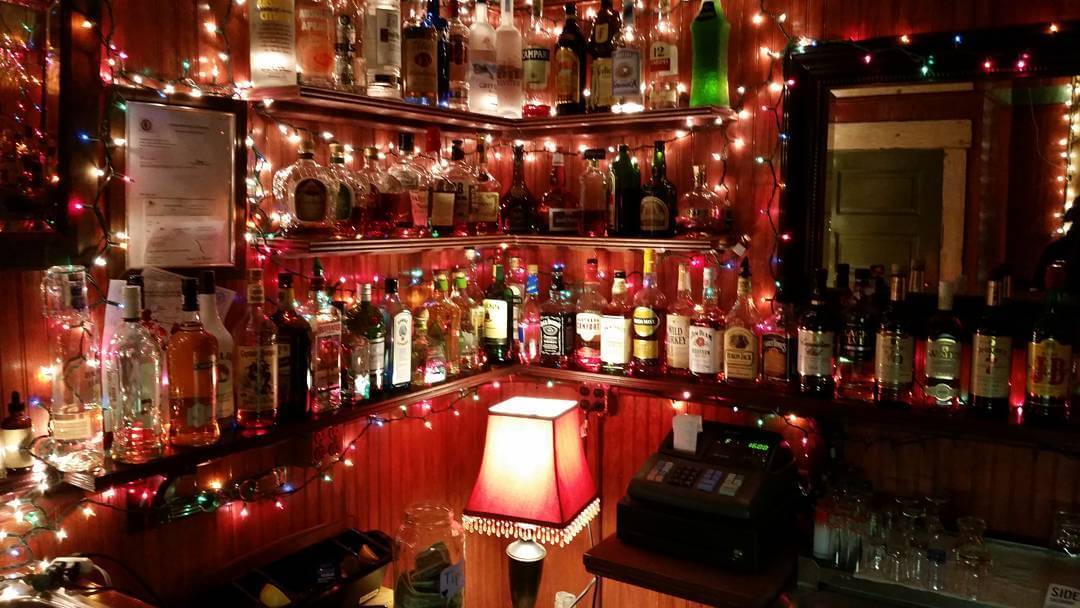 At first glance, you might mistake the mini bar as a vanity table, mostly due to the bright lights that surround the mirror. But this place is actually a bar. That’s right.

Room 4 Bar Bisbee is located just off the second floor lobby of the Silver King Hotel. It is the smallest bar in Arizona (or probably the whole world) because it only has 3 stools and a 4th squeezed in at the end of the bar. The 100-square foot space is wedged into the hotel. There is a tiny table for 2 in the corner that completes the set-up. But that’s it. That’s the whole bar. Unlike some other fancy places such as the underground bar in Phoenix that looks like a Tiki wonderland, this place is simply a small spot where you can enjoy an awesome selection of spirits! The cool vibe of this little bar makes this one of the local hangout favorites. It adds to the charm, right?

The owner of this place is also the bartender. She’s in charge of pouring and shaking drinks, keeping up with the orders, chitchatting with the customers. Of course, we think she always has a full house in her bar. Then again, “full house” is relative. Room 4 Bar, Bisbee is, after all, Arizona’s smallest drinking establishment.

What Does a Typical Night at This Bar Look Like? 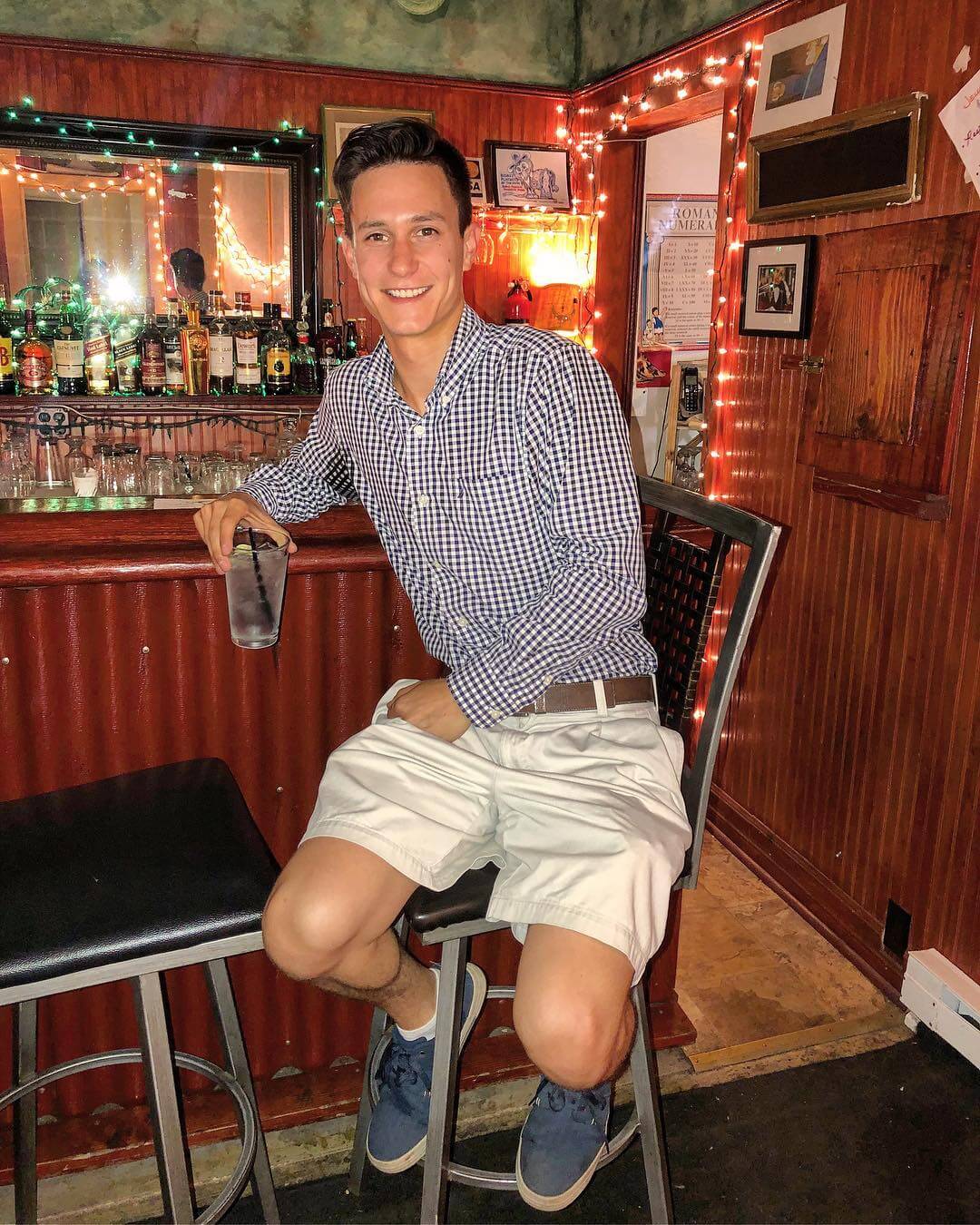 Normally, a weekend night will see a “full house” because each of the four stools at the L-shaped bar is occupied. Some customers would also need to stand in the remaining space, facing the bar two by two. If you think it’s uncomfortable, you’d be surprised to know that many patrons actually “enjoy” this set-up. It’s not just intimate. It’s a different experience. After you get used to chilling and having a good time at a typical bar, or perhaps an outdoor patio, this one seems like it is “one for the books.”

Back then, Room 4 Bar Bisbee hosts the “Bisbee Drink and Draw on Our Outdoor Patio” game. The event is actually a gathering of local Bisbee artists who share their talent and draw the subject of the day using their chosen medium. It is a completely fun gathering! 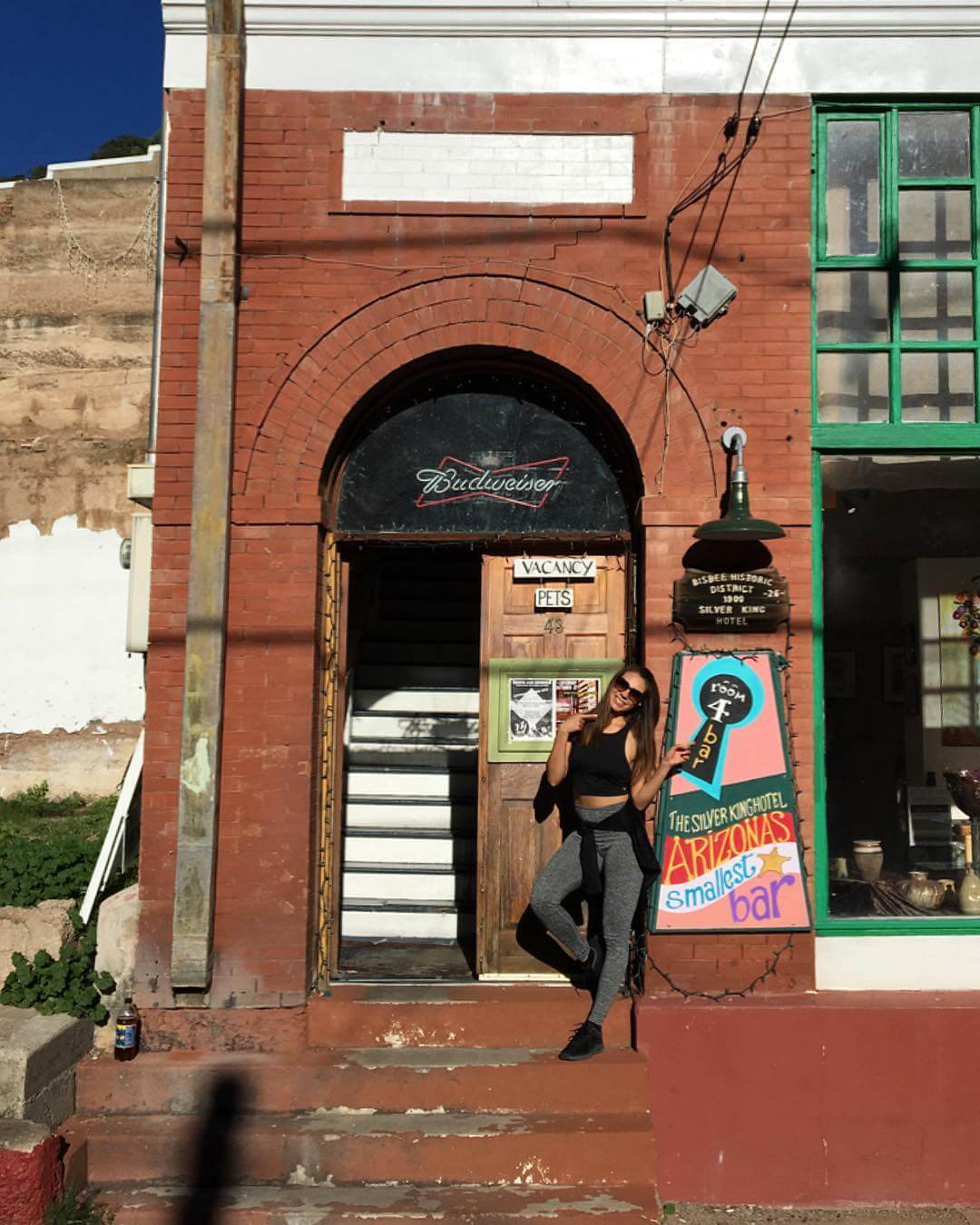 While this bar is said to be Bisbee’s best kept secret, it’s not completely unknown to people. In fact, if you get into any casual conversation with merchants or locals, they would probably ask if you’ve seen Arizona’s smallest bar and point you to Room 4 Bar Bisbee. Silver King Hotel definitely made the right choice when they decided to have a liquor-stocked walk-in closet. 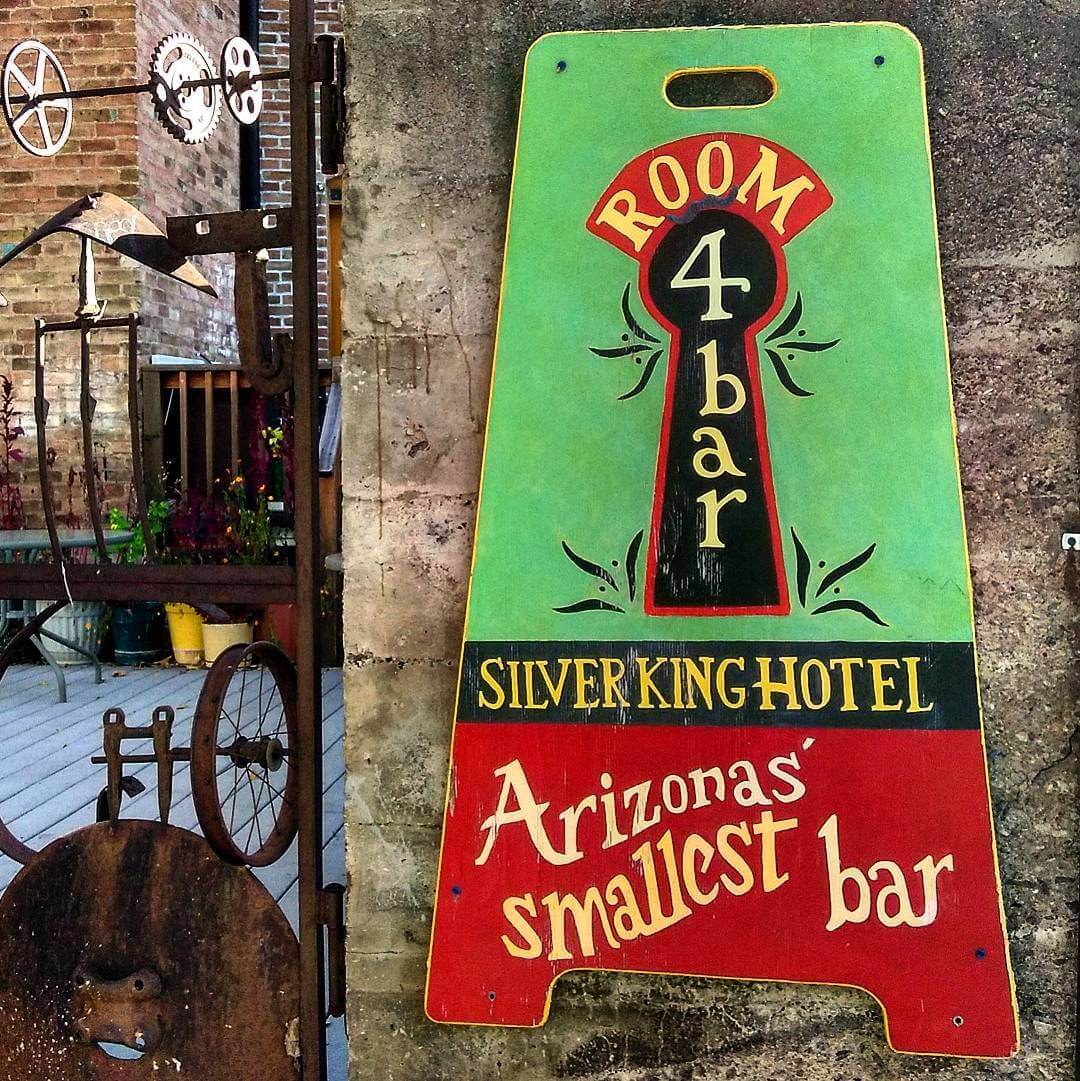 The “mystery” of this bar probably has something more to do with the story behind it. Silver King Hotel was originally built to house turn-of-the-century miners. That’s the reason why it is set in the Bisbee’s Brewery Gulch. It is just a 5-minute walk from Bisbee Queen Mine Tours and 1.2 miles from the Old Bisbee Ghost Tour.

The Bar Used to Be an Un-Rentable Room 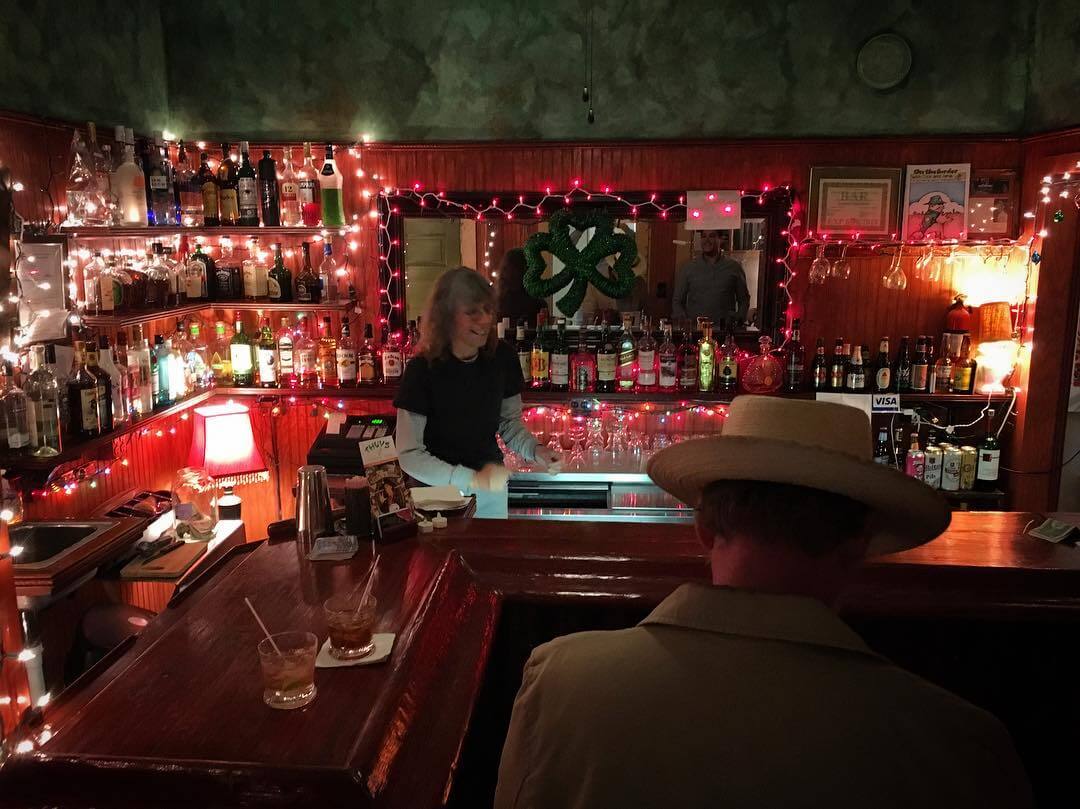 Yes, the bar was actually once a miserable and un-rentable room that became a dumping ground over the years. Nobody’s buying it because it is small, and perhaps not appealing to many buyers back then. Owner Danielle Martinez just thought of a question one day and it was “How can I make more money?” The question was rooted in a moment that will change her life.

While the answer came to her easily, the execution was the tricky part. Opening a business is complicated, and she knew that. She only put her vision into fruition, when in 2009, her desire to build a business became a necessity. During that time, her husband who had bladder problems developed cancer, so Danielle needed a way to make more money because she knew treatments would be expensive even with their health insurance.

From that moment on, decided to serve drinks to the locals because she has experience tending the bar. She also believed that will really make money. While looking for options and thinking about possibilities, an idea came to mind when she was left standing outside rooms 4 and 5 of her hotel. The space was a waste, but why not turn it into something useful? And perhaps, profitable?

Of course, there were still problems during that time. The walls of the rooms were actually no more than chunks of plaster held together by the underlying lath. In addition, the ceiling dipped precariously. No one would want to hang out there. She needed to invest and make it something “worth visiting.”

From a Vision to Reality: This Small Bar Is Definitely Big on Character 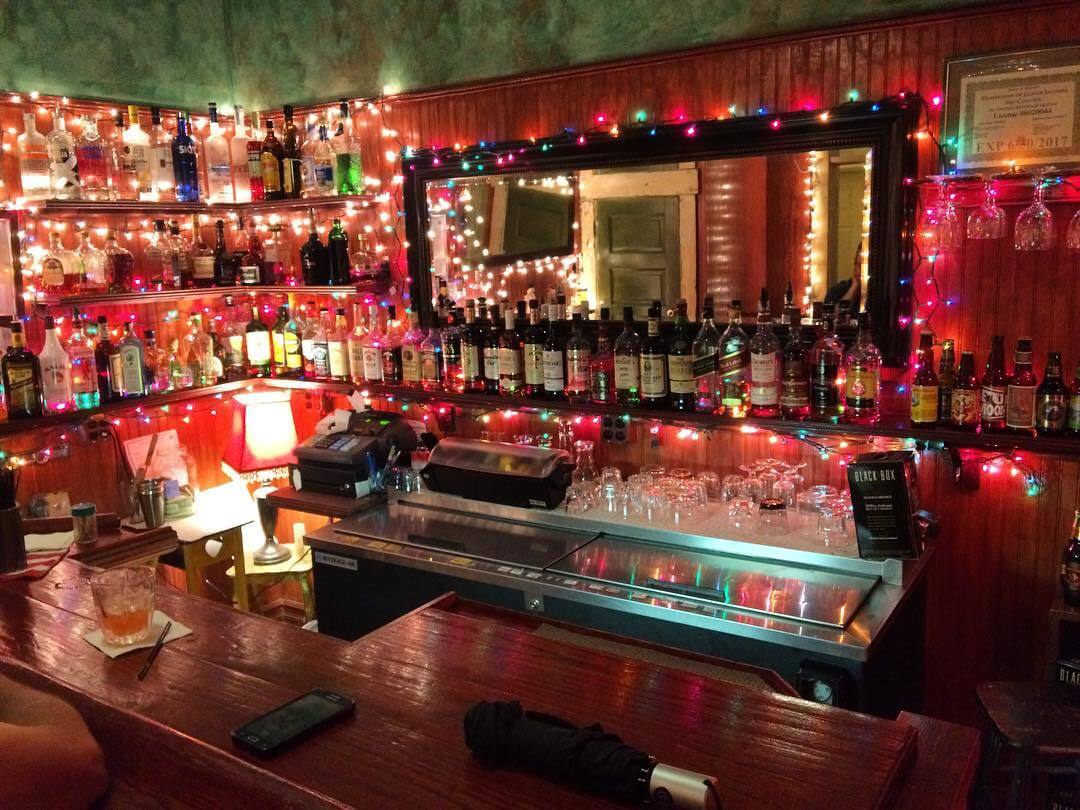 Martinez knew that the rooms could be the saloon and that she could probably fit three stools within the space. She would also need a refrigerator, shelving, and miscellaneous items every bar needs. It’s going to be tight, but it is going to work.

They worked on construction and renovation, and the rest of the space came together nicely. When they were finished, they realized that the design style is something like “turn-of-the-century-small.”

Room 4 Bar Bisbee opened in 2011, and thankfully, many guests powered up the stairs of the Silver King Hotel for the grand launch of the bar. Martinez happily mixed the drinks for her patrons, putting her three decades of experience in the spotlight. To this day, the music in the bar still plays and the liquor still flows. Dogs can even enter this bar as long as they wear a leash and stay on the patio. Wouldn’t you say that this is such a cute but quirky tavern?

This may be the smallest bar in Arizona, but four stools actually keep the bartender busier than you might expect. Thirsty patrons keep buzzing in for drinks, with a regular night averaging at $600-$800, while busy nights ring up to $1,000.

Most locals just order and take their drinks to the lobby or patio. On the other hand, Room 4 Bar Bisbee first-timers usually plant themselves on the stools.

What do you say you get drunk in a historic place for an absolutely unforgettable time?

Before you go, check out this article on 15 Places That Make Bisbee, Arizona So Special!

Here Are 30 Things You’ll Love About the Cute Town of Greer, Arizona

Hike 12,633 Feet to the Highest Point in the Entire State of Arizona for an Epic Adventure Like No Other