Abandoned, spooky, and domes; the three words society fears the most. Well, not literally, of course. We are not sure about the third word. If you are looking for an out-of-this-world sight in The Grand Canyon State that doesn’t involve million-year-old geological formations, then lucky you! The Domes in Casa Grande, Arizona, more popularly known as ‘The Domes,” is an exquisite site with a spine-chilling and cryptic appeal.

Be cautious as this location must only be visited by those with a yearning for adventure, and an appetite for thrill and excitement! What dangers lie here? Is it even dangerous at all? What makes it scary? There’s only one way to find out!

The Domes: Are These Flying Saucers Left Unattended?

From a standstill, you won’t call this place The Domes. You’d probably call it the flying saucer, land bubbles, creepy cribs, caterpillars, or what have you. One structure on the site has a flying-saucer-like appearance, while the other three look like caterpillars. It is definitely not something you’d see when you are roaming downtown Tucson’s mural spots. 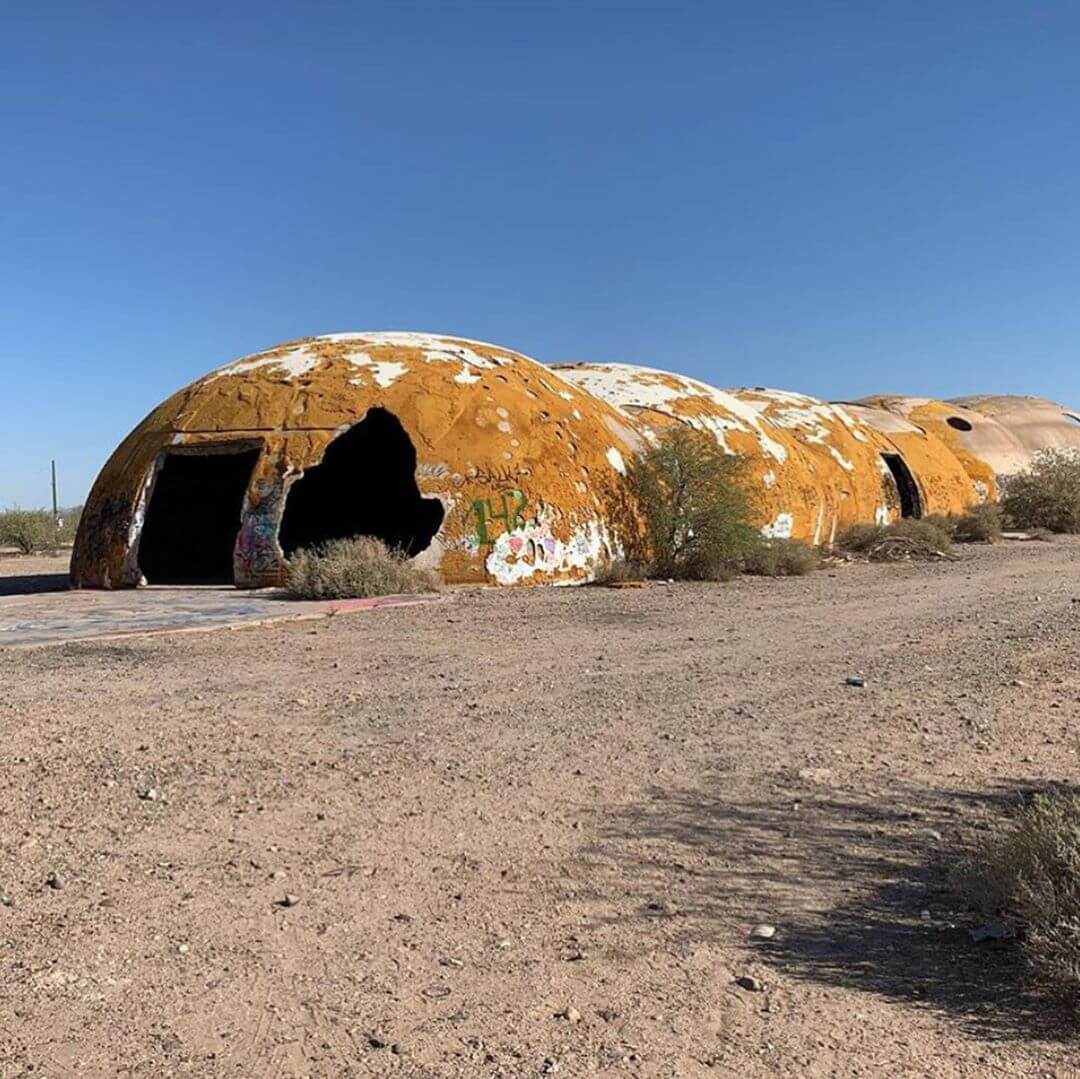 The Domes owes its futuristic and quite alien-like appearance to its process of construction. There are three purposes for such design: efficient insulation, relatively cheap cost, and quick construction time. The structure earns its dome-like appearance by coating giant balloons mounted on the steel skeleton with polyurethane foam, hardening the exterior of the balloons. Then, it is layered with a slab of concrete, forming its shell. Erected around the late ’70s to early ’80s, the plant meant to serve as a manufacturing plant for InnerConn Technology Inc., particularly motherboards. Each structure took roughly six weeks to build and chimed in $150,000 each. Talk about a hefty price tag!

So How Did The Domes End up Getting Abandoned? 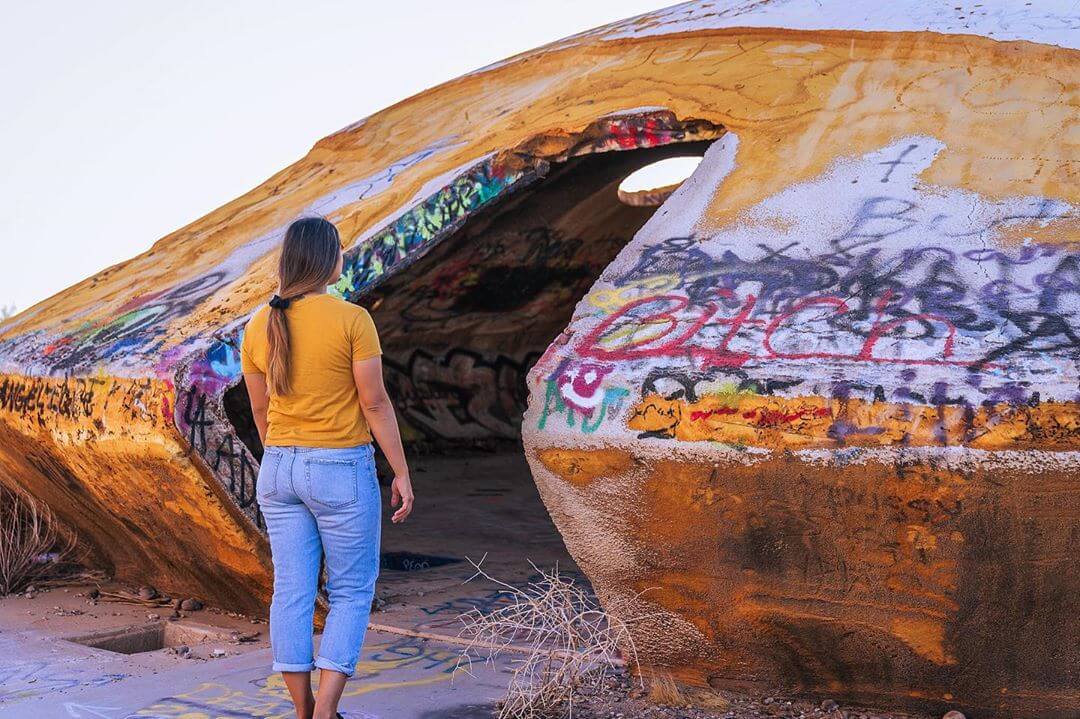 Well, for one thing, construction on The Dome was halted because InnerConn defaulted on a loan. Soon after, the Union Bank of California assumed ownership of the company’s assets. But this happened not before the placing of the foundations and the steel skeletons. Leaving a semi-finished structure in ruins, to be eroded by time. 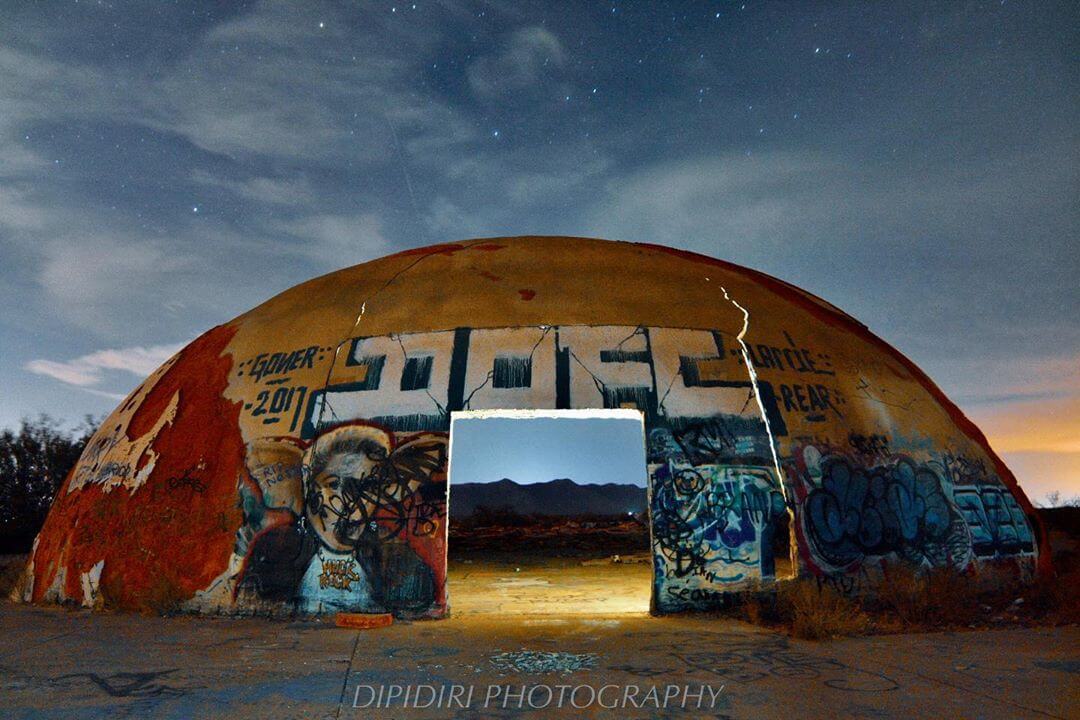 For one, The Dome is one heck of a place to do a photoshoot. If you visit, you’ll probably encounter other individuals who are doing the same thing. It has this cool vibe that checks out on every frame you can fit. Not to mention, the structure’s design and the vandals on the walls are chic. In Millenial terms – it is Instragrammable, indeed!

Now here’s the spooky stuff. Apparently, since its closure, The Domes have been a site for vandalism and some sightings. Not spooky enough? Although this one appears to be over the top, The Domes has been a suspected place of ritualistic satanic worship. Rumor has it, that come nighttime, ritualistic witchcraft and satanic worship take place in the tunnels. There are tunnels at the Eastern end of the facility, but we’ve got no proof about the said rituals. Nothing of the sort has ever been reported at the site. 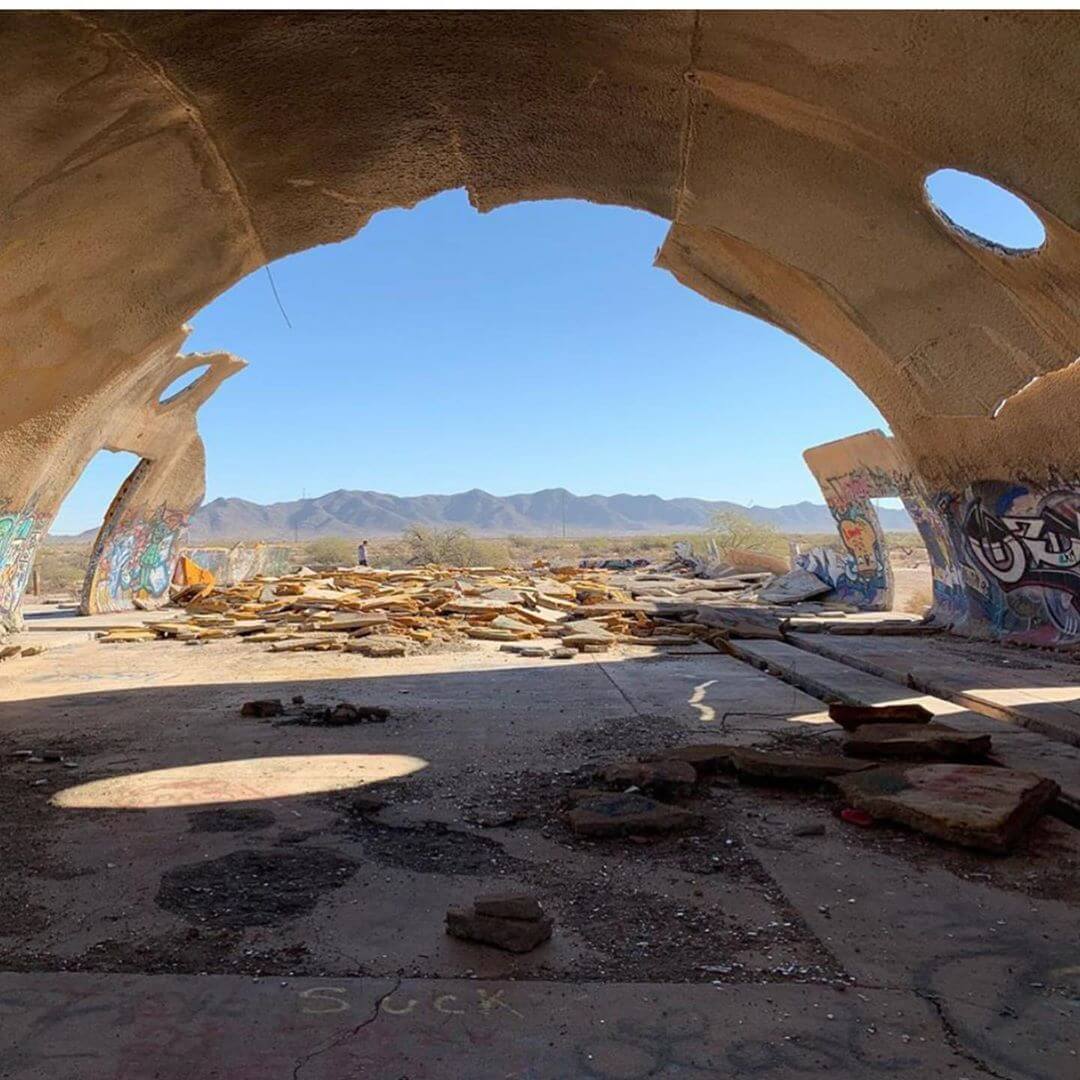 The common and ordinary reports filed under The Domes involve underage people drinking here and there, some ghost stories around, and loitering around the premises. However, firsthand accounts do say that they have seen dark shadows and heard strange voices from The Dome. Whatever you make of it, know that if you ever see the “No Trespassing” sign, it would be wise to heed its advice. You heard it here first, and don’t say we didn’t warn you!

Some Visitors Report Weird Vibrations and Having Uneasy Feelings

It’s probably normal to feel afraid if you are visiting an abandoned place. What about for The Domes?

Well, there have been reports of tapping noises on cars as well as weird vibrations at The Domes. According to some accounts from Weird US, while there are no scary or shadowy figures around, you’ll be startled by the strange noises at the site. You’ll hear an empty beer can being pushed by the wind, or even a plastic bag snagged on a piece of debris inside one of the domes. The domes amplify the sounds quite well, so the fear factor would probably be up as well. We hope you are not easily startled especially if you are visiting alone!

For the most part, the place will appear more than just a bizarre or interesting dumpsite. It possesses an unusual stillness that will give you a hair-raising experience. 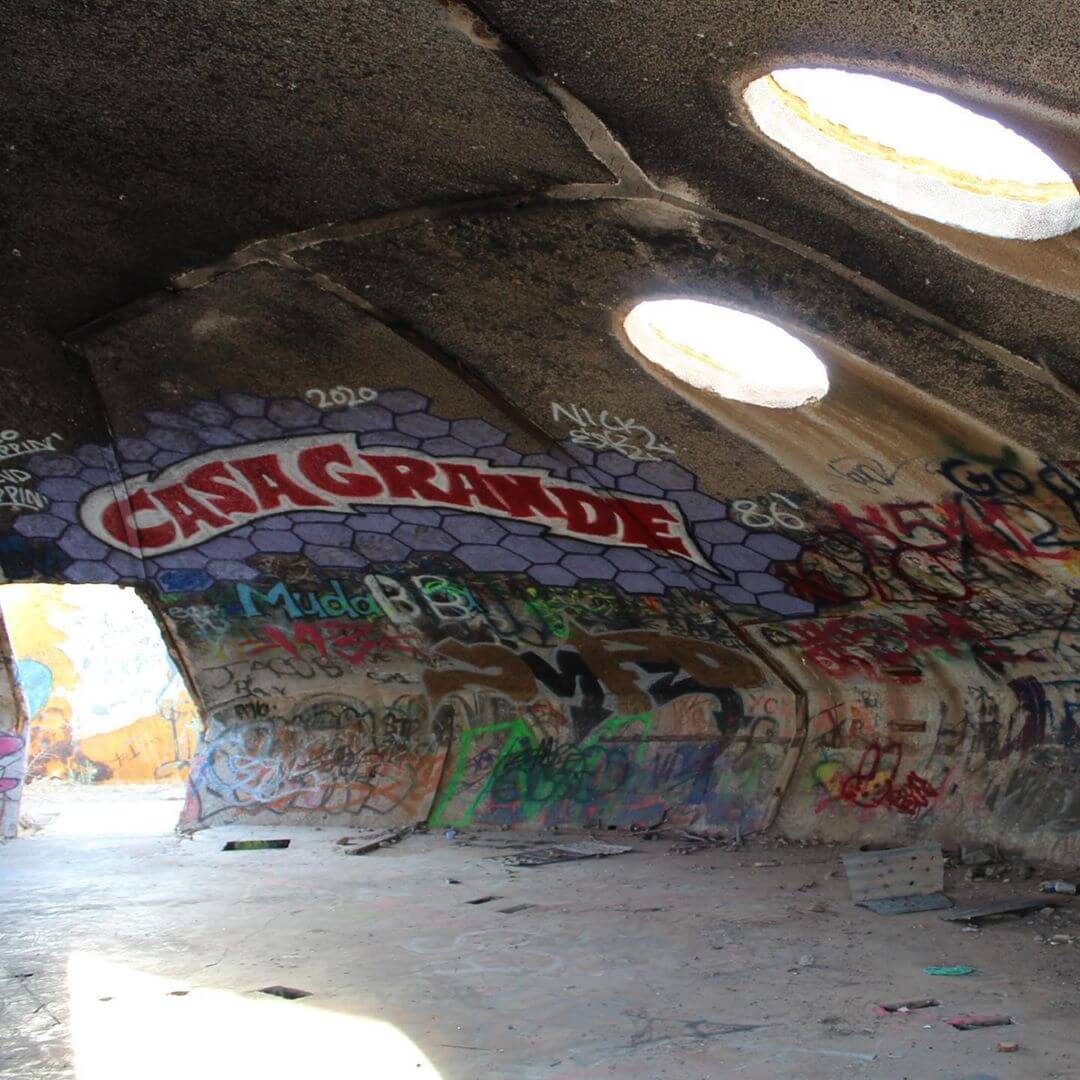 Note: The Domes is just by the freeway. As of writing, there is an order for the demolition of The Domes. However, they still stand, save for the one structure that has already collapsed.

Have you ever been to The Domes? If you want to check out other cool spots in Arizona, make sure to read the following: This Beautiful and Sunshine-y Flower Field in Arizona Will Make You Feel Beautiful and The Haunted History Behind This Unique Hotel in Tucson Will Seriously Give You Chills.

This Street That Is Most of What Is Left of Lowell, Arizona Is a Perfect Vintage Photo Spot