Home to Dodge City, the windiest city in all of United States, the state got its name from a local American tribe “Kansa” which translates to “people of the South wind” . Now often referred to as “The Wheat State” and “The Sunflower State”, the area has proved to have some of the most amazing places to visit. Scroll thru the list and check out the most beautiful places to see in Kansas! 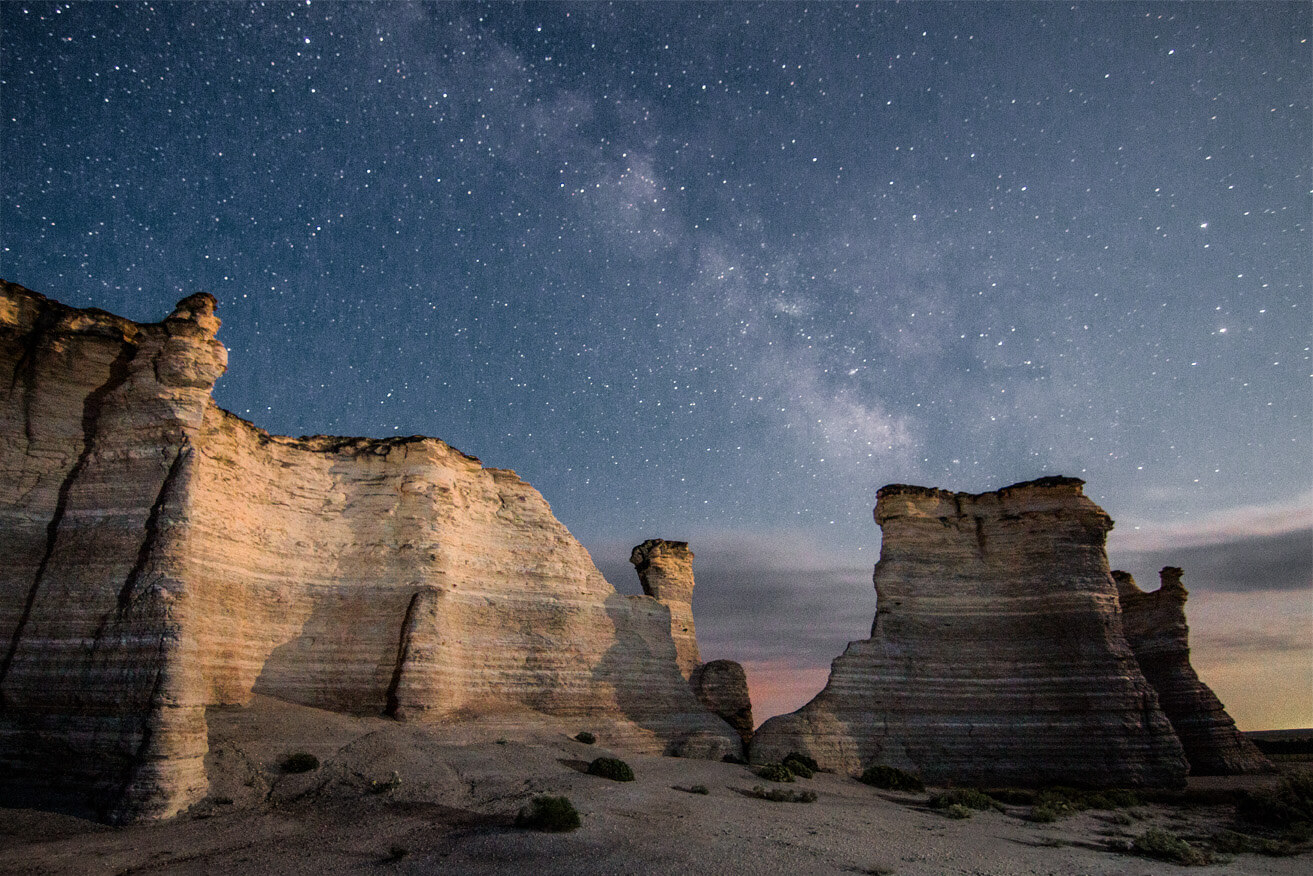 Regarded to be a National Natural Landmark, these Monument rocks were one of the first landmarks in the state to be acknowledged by the National Natural Landmarks Program (NNL). Truly one of the most beautiful places to see in Kansashese formations can reach up to 70 ft in height, rising from the flat farmlands around them. One perfect way to enjoy the sunset when you’re visiting is the famous “Keyhole”. It is a large gap in one of the monuments and it will give you just the right view.

After enjoying the beauty of the impressive formation, one should never miss the chance to visit the Keystone Gallery. It prides itself in generating its own electricity from solar and wind energy. You may check out the fossils and artworks on exhibit and souvenirs for sale. 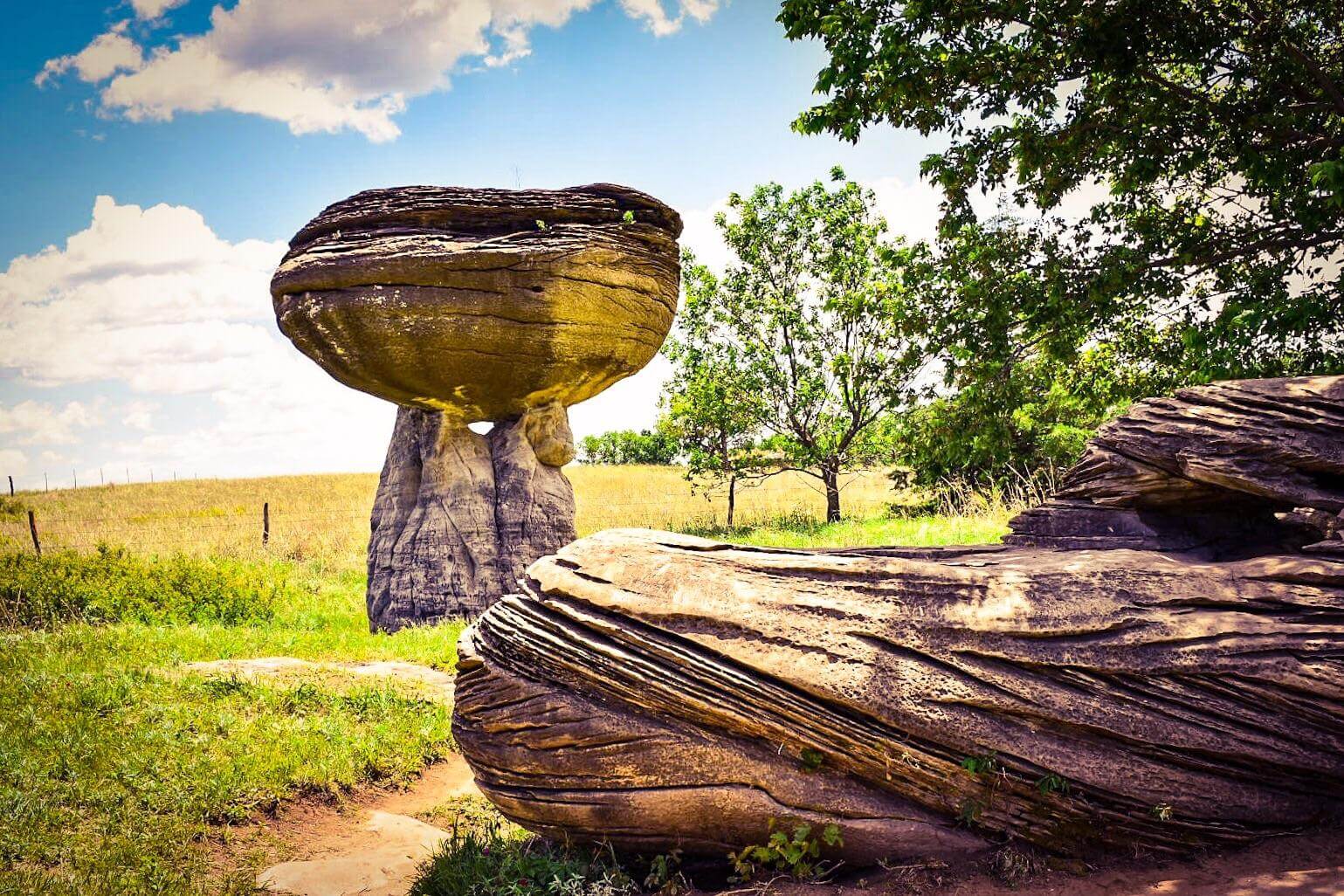 Known as “Hoodoos”, these rock formations are the result of the state’s uneven erosion and weathering. These mushroom-looking formations are tagged as one of the “Eight Wonders of Kansas Geography” and according to the locals, the Native Americans used to write graffiti on some of the rocks and used them as landmarks and meeting places. 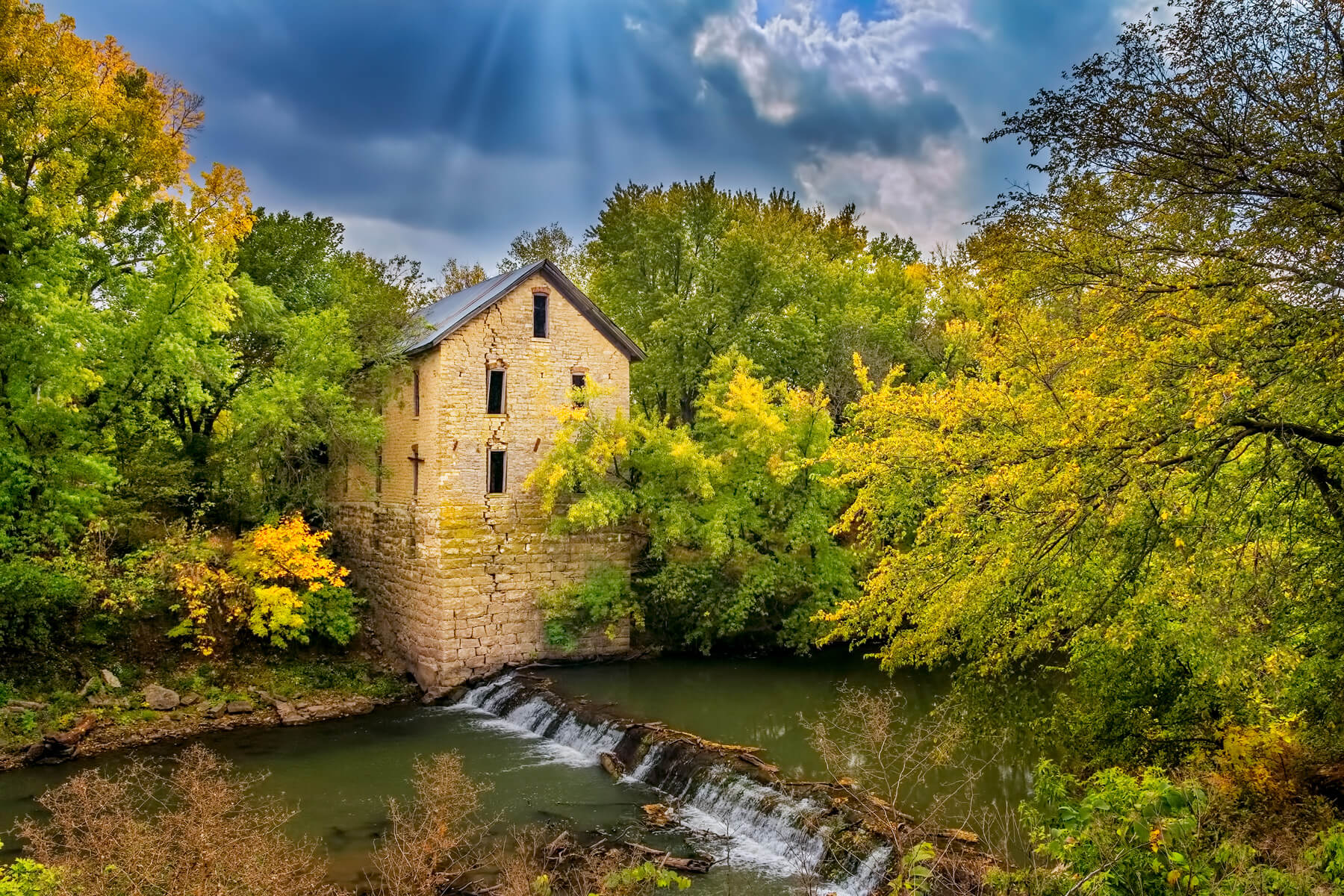 The Cedar Point Mill, or as known before as Drinkwater and Schriver Flour Mill, is a true historical landmark. It has been standing by a stone dam in Cottonwood River since 1875. Listed in the National Register of Historic Places, the mill remains to be a reminder of pioneer America. 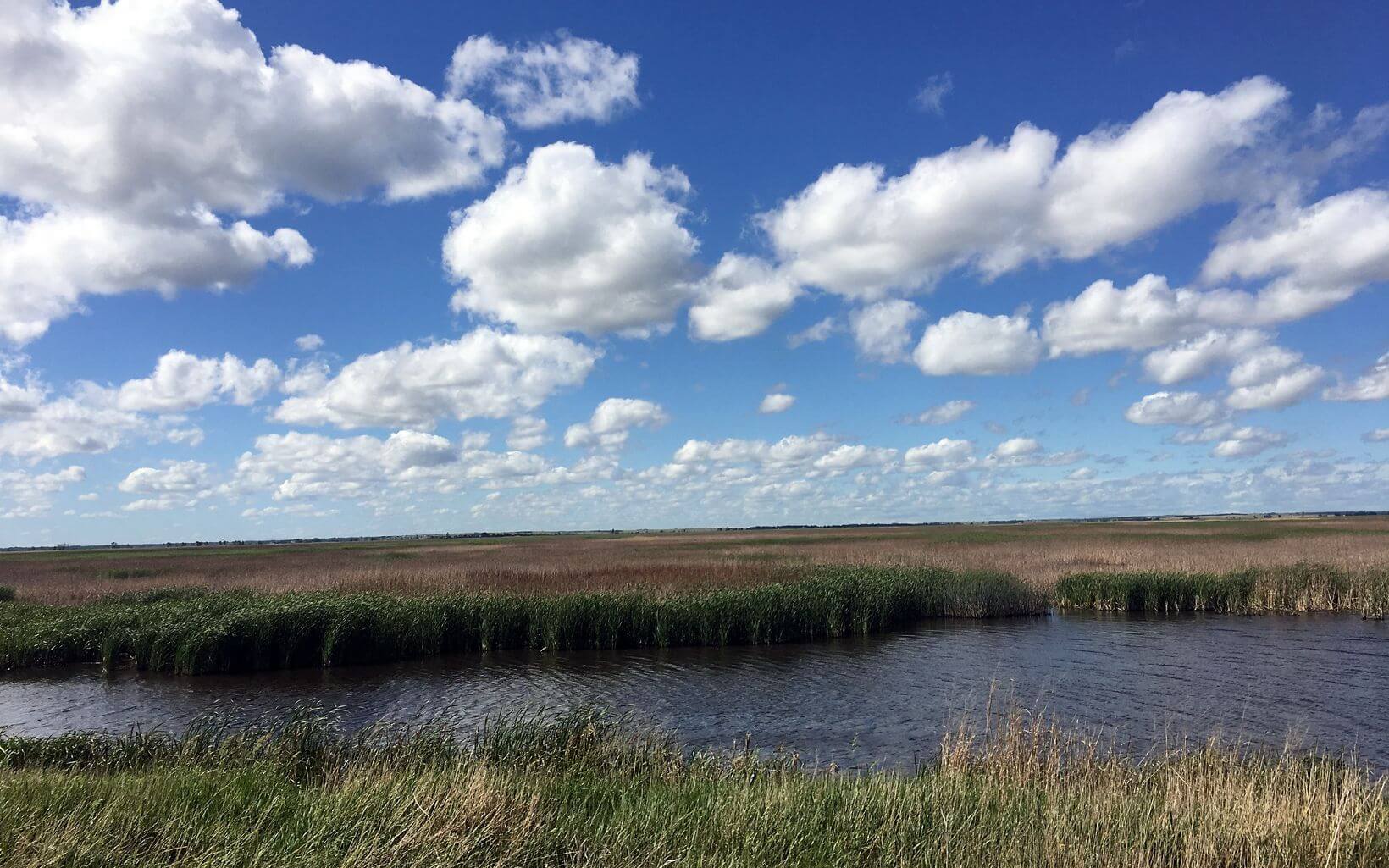 The Cheyenne Bottoms Wildlife Area covers more than 19,000 acres, and is part of a massive natural land sink north of Great Bend. Considered to be the largest wetland in mainland US, Cheyenne bottoms is an ideal spot for wildlife watching. It has been a resting place for tens of thousands of migrating birds and also a home to other animals like beavers, raccoons, turtles, and snakes. Be sure to check out the Wildlife Area if you would like to have a perfect getaway close to nature. 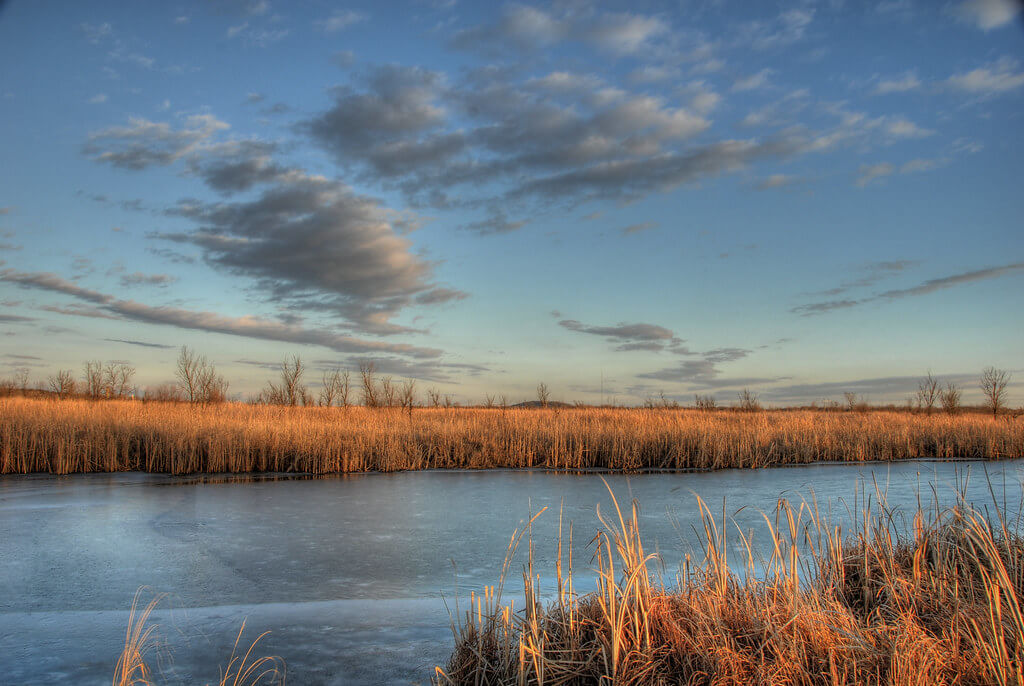 A home for a number of birds, animals, and plants, The Baker Wetlands showcases an incredible natural habitat for these species. Baker University not only makes sure the wetlands are taken care of but also uses the information that they get from their research to teach students about biodiversity. The Discovery Centre gives information about the wetlands’ history, and on the conservation of wildlife in one of the most beautiful places to see in Kansas. 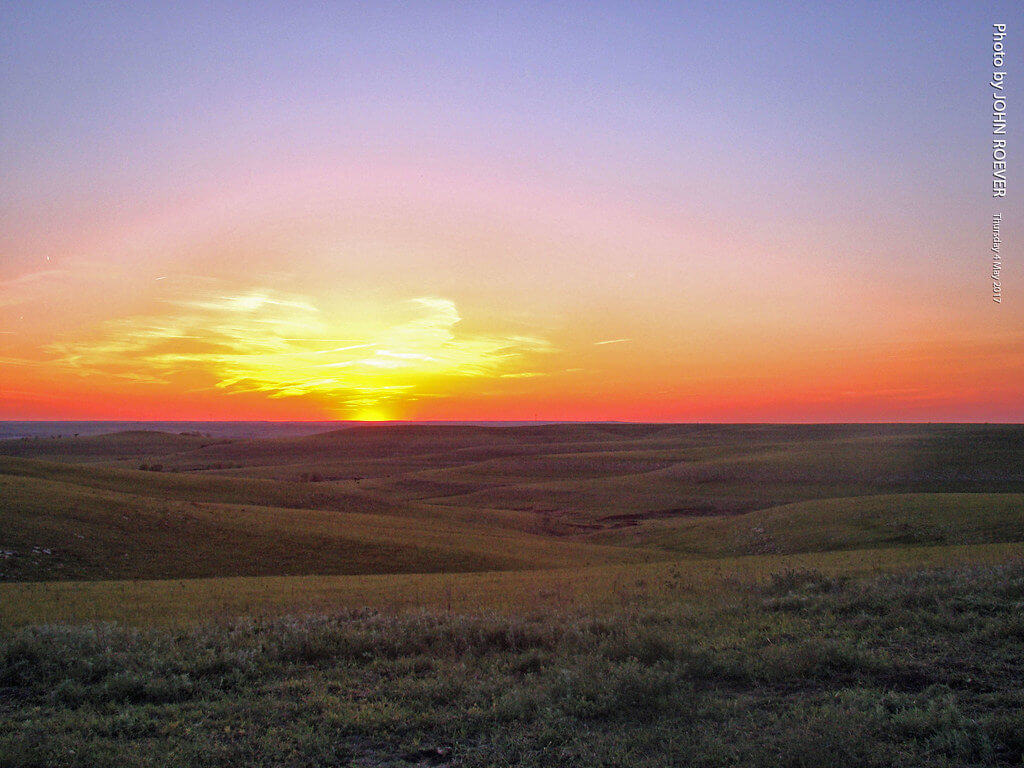 Reaching up to 4,000,000 acres, The Flint Hills is considered to be one of the world’s largest areas of tall grass prairie. It is also known to be the beating heart of Kansas. One of the ways to preserve the lands is the conservation programs. These programs include the preservation of some of the parts of the prairie, making it remain completely wild. It also features untouched rolling landscapes, fields of wildflowers, and a habitat for wild animals. 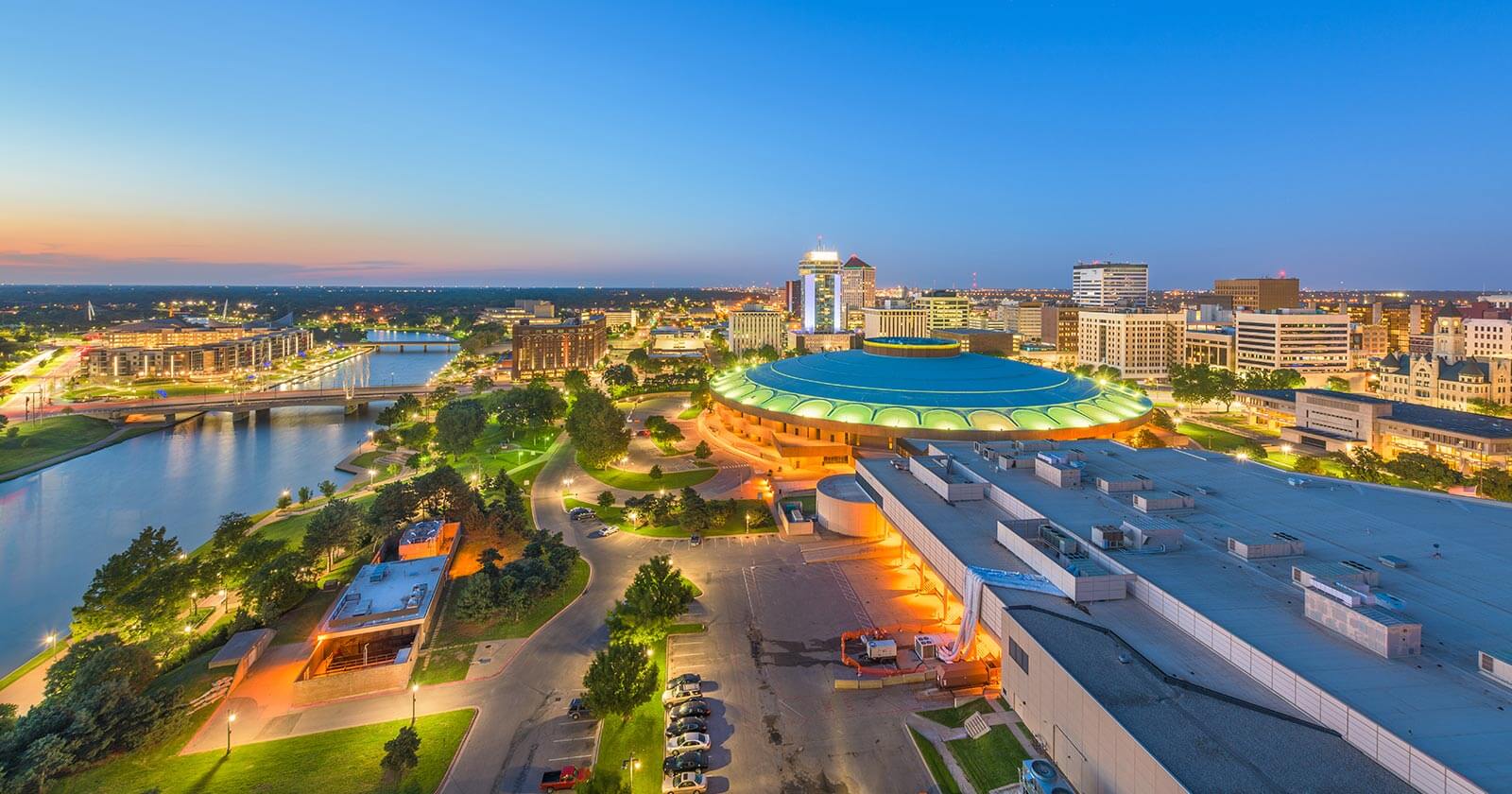 The largest city in Kansas and also a top spot for arts and culture in the wild countryside, Wichita offers quite a number of culture and entertainment in all of Kansas. It has a science center, aviation museum, and museums dedicated on telling the history of African-American and Native American culture. It was given the nickname “ Cowtown” because of the historical importance of the cattle trade. You may find plenty of “western-wear”, their signature cowboy hat or boots in this side of the state. 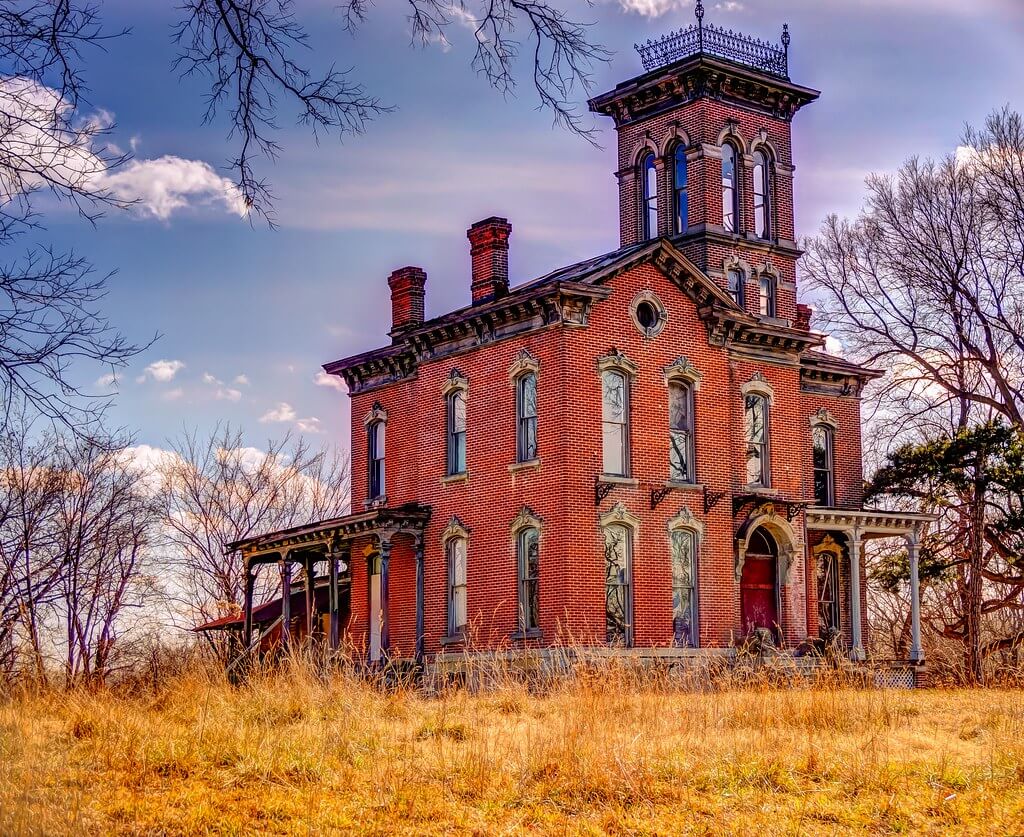 A former home to several generations of the Sauer family, the Sauer Castle is an extraordinary gothic-style mansion in Kansas City. This place is considered to be haunted and has been a subject of many horror stories in the area. The house has a troubled past, with stories of suicide, drowning, and people dying of diseases. Despite the vandalism on the walls, the castle still remains to be one of Kansas State’s hauntingly beautiful spots. 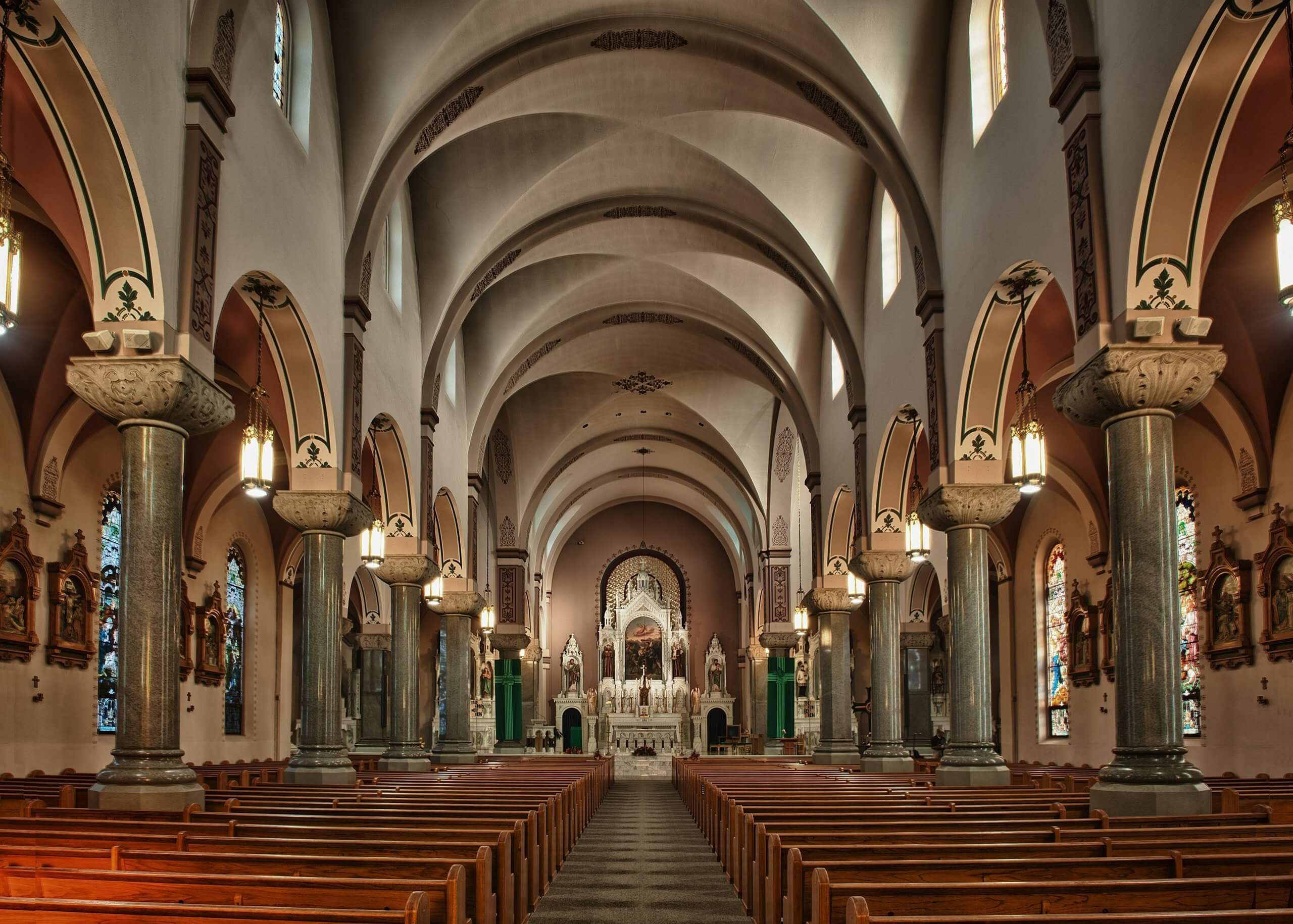 Also listed on the National Register of Historic Places and one of the most beautiful places to see in Kansas, this 100 plus year -old Catholic church provides a serene place of worship for the people of Victoria. With its Romanesque style of architecture, it attracts over 16,000 tourists every year. Upon its completion, it was regarded as a minor basilica and was also called the ‘Cathedral of the Plains’. 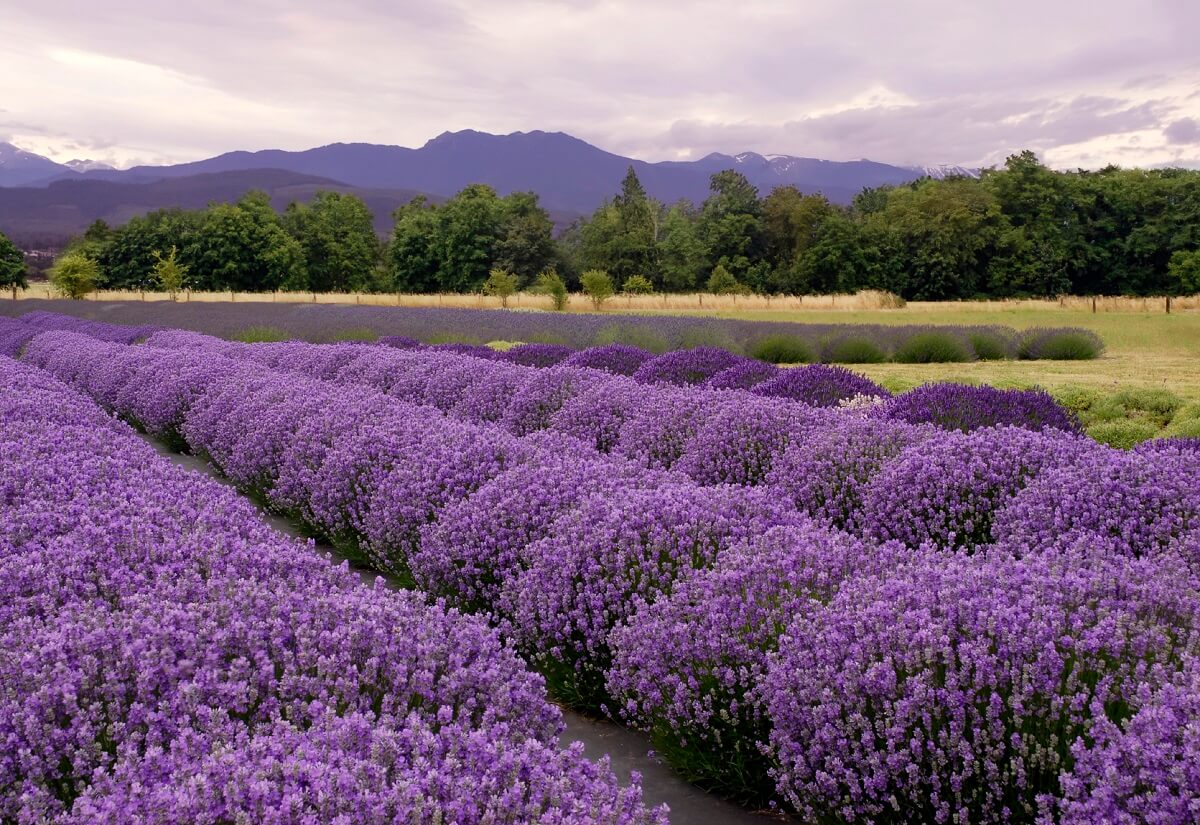 One of the top products in Kansas is Lavender. Many farms in Topeka and its surrounding cities have been big producers of Lavender over the years. These products include lavender-infused furnishings, lavender with honey, and raw lavender to name a few. Some farms allow locals and tourists to pick their own lavender during harvest season. The purple plains and the intoxicating scent of Lavender makes it such an unmissable sight in the state. 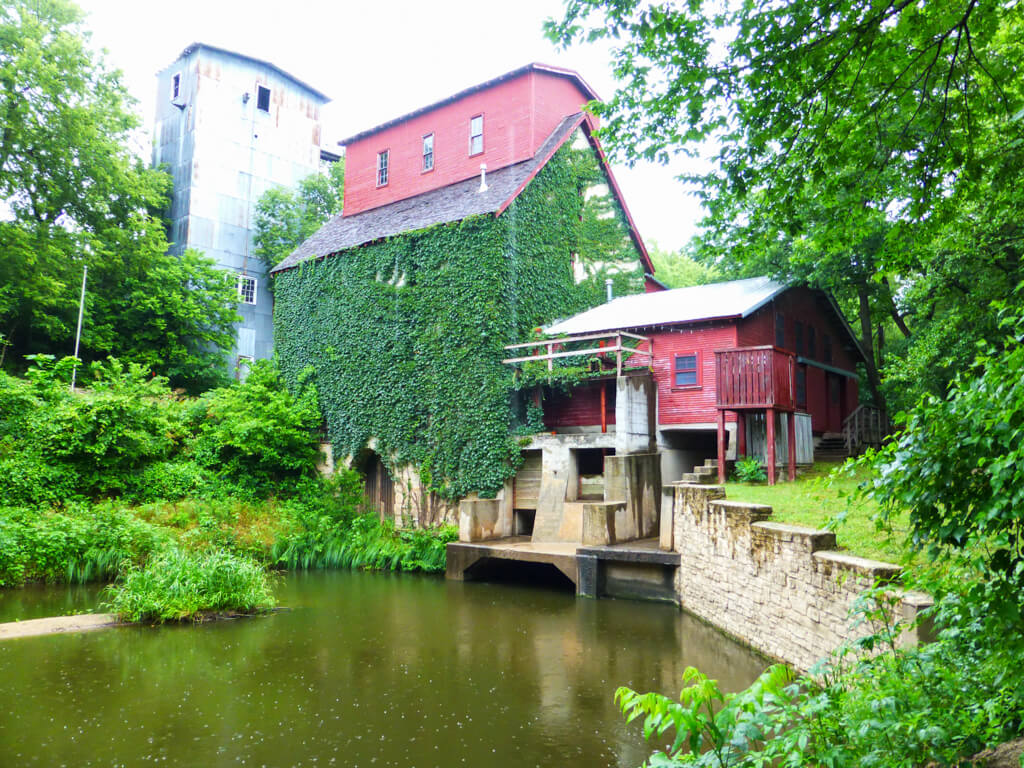 The Oxford Mill is one of the state’s most famous landmarks. It has produced flour that supplied the entire town for decades. Most of its history has revolved around the Ninnescah River. Now recently restored to maintain its gorgeous facade and surroundings, it is now used by a local school for community events. While you are in the area, make sure to drop by at the local Carriage House, the first building in Oxford that was made in bricks and a good example of the early 19th century American architecture.

The state of Kansas not only serves a slice of the past with its history, but it also gives its visitors a place to escape with its beautiful and relaxing sceneries. Aside from marvelling at the most beautiful places to see in Kansas, there’s also a ton of fun things to do for travellers of all ages! Be sure to go over the places mentioned above to have the best Kansas experience.

7 of the Most Beautiful Places to See in Topeka