Imagine going on a road trip and seeing an eroded volcanic plume rise into your site of vision. It is gigantic, quite literally a head-turner, and you’d have a hard time looking away. The dramatic natural wonder rises over 7,000 feet high and rises 1,600 feet above a barren desert plain south of the San Juan River. Well, Shiprock is one of the must-see sites in New Mexico. Keep reading… 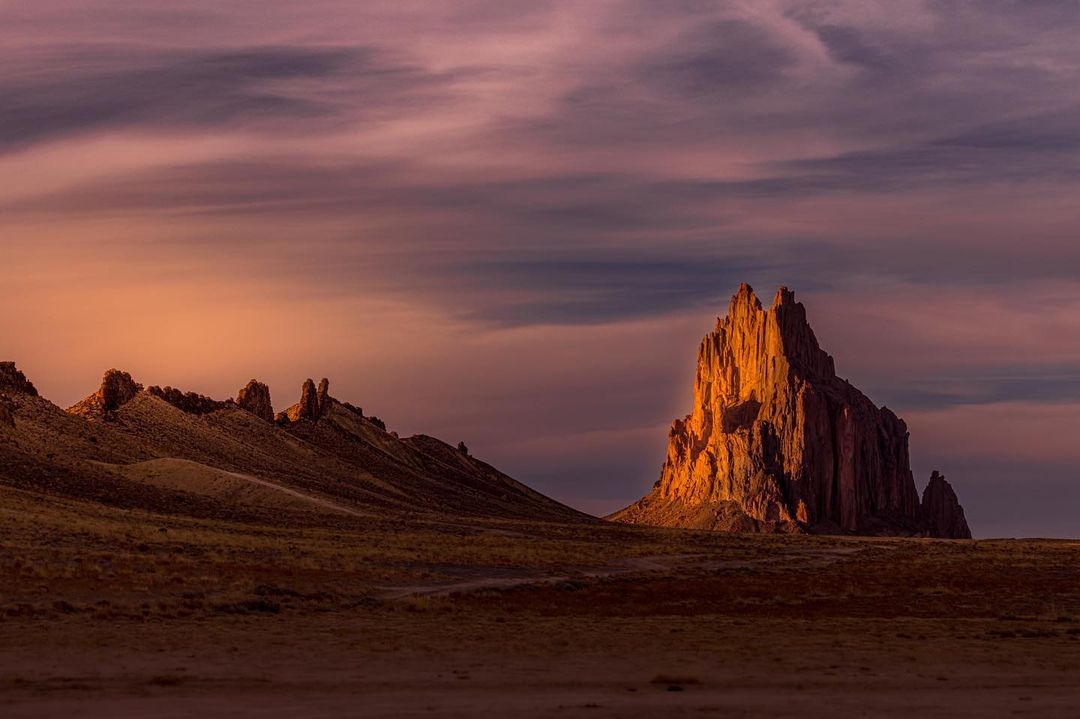 That’s right. No matter which direction you are coming from, Shipwreck is quite visible. The sand-colored column was named by Anglo settlers, and is known to the Navajo as “Tsé Bit’ a’í.” This translates to “rock with wings.” According to the Navajo Indian mythology, the formation is quite smilier to the giant bird that once carried the Navajo from the cold northlands to the Four Corners region. 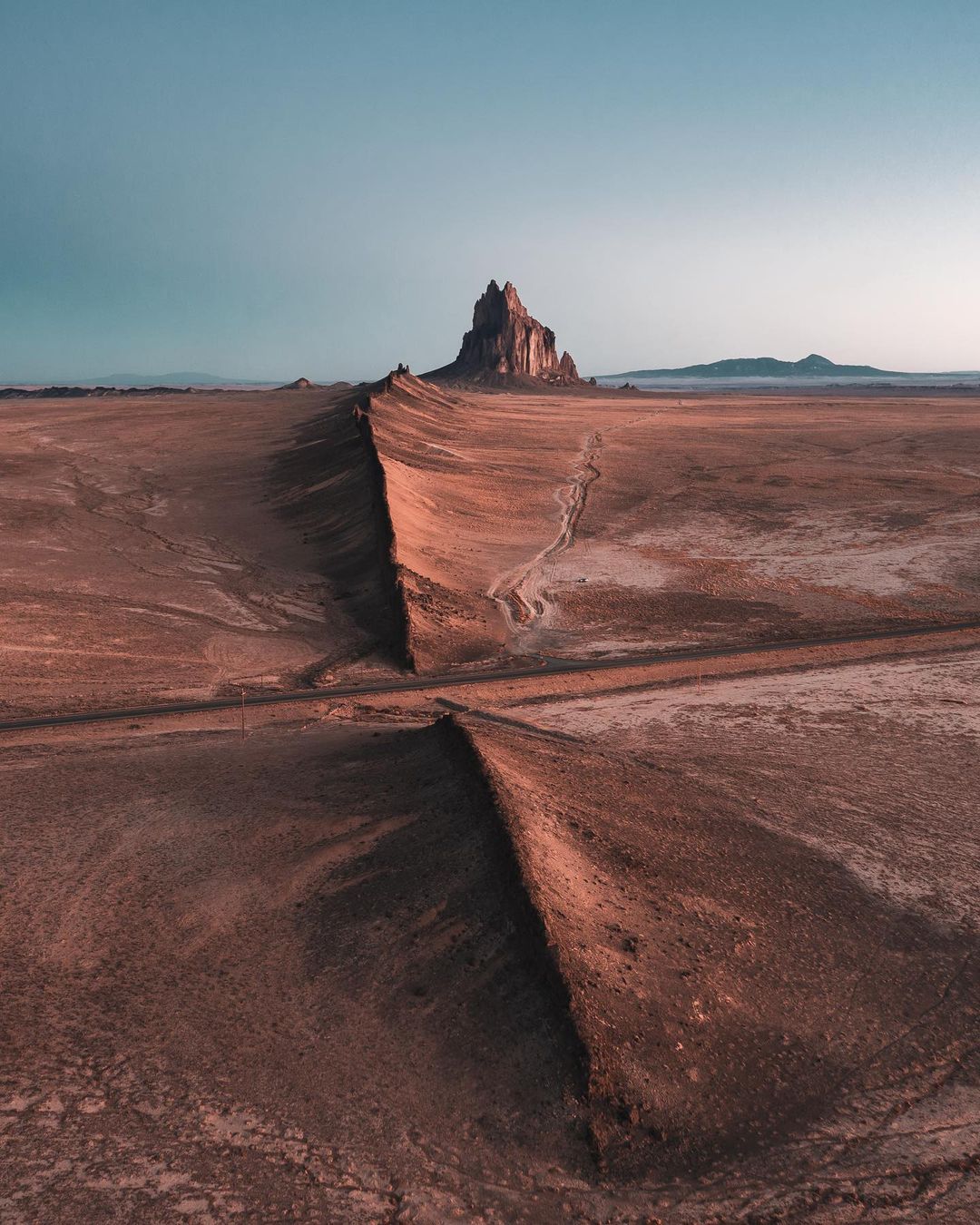 If you look at it from afar, you might see its resemblance to a large sitting bird with folded wings. Some even say that the north and south summits are the tops of the wings.

While this natural wonder got its time from mythology, it was actually originally called “The Needles” by its explorer, Captain J. F. McComb. You can already guess why it was called that way – it is mostly due to the uppermost pointed pinnacle. However, the name didn’t stick since it was also called Shiprock, Shiprock Peak, and Ship Rock.

These were the names from the map from the 1870s, because of its resemblance to 19th-century clipper ships. 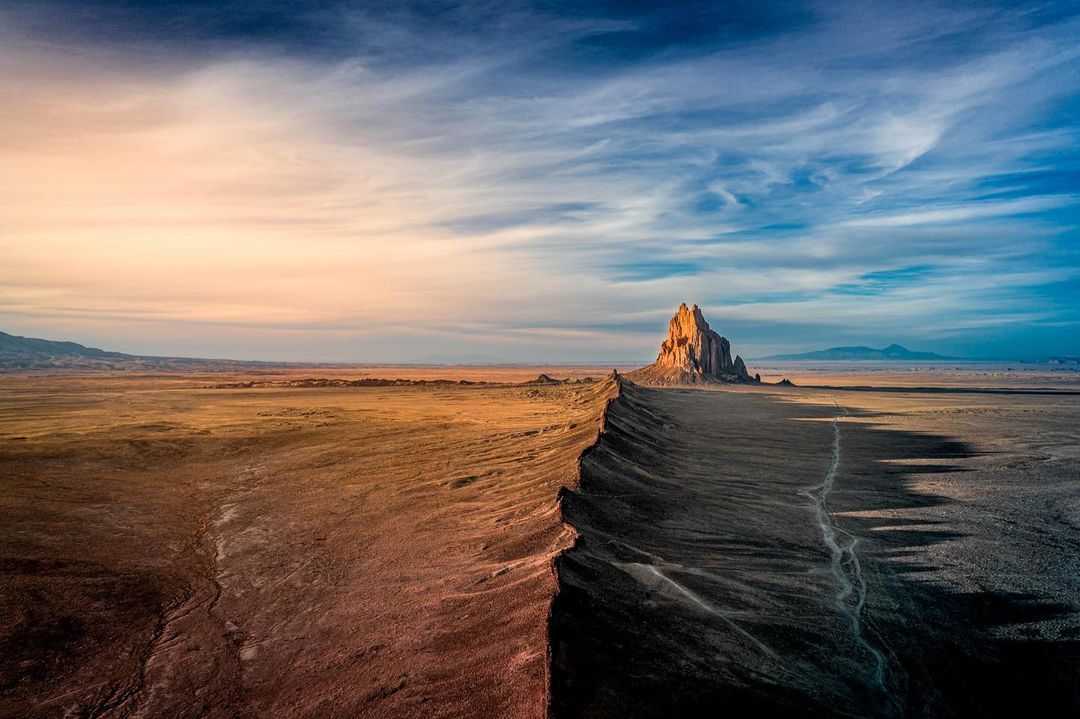 This place is sacred to the Navajo people since it pertains to a time when they were saved. They were fleeing from another tribe when the ground beneath them suddenly turned into a huge bird that transported them on its back, flying for a day and a night before landing at sunset where Shiprock now sits. According to legend, the event was also due to the shamans’ fervent prayers.

After they landed, the people climbed off the bird, and the huge animal rested from its long flight. However, a giant dragon-like creature called the Cliff Monster appeared, climbed onto the bird’s back, and built a nest, trapping the bird. In order to save the bird, the Diné sent the Monster Slayer to fight Cliff Monster in a Godzilla-like battle. The Monster Slayer eventually beat the Cliff Monster by cutting off its head and heaving it to the far east. Some say it is now the Cabezon Peak. 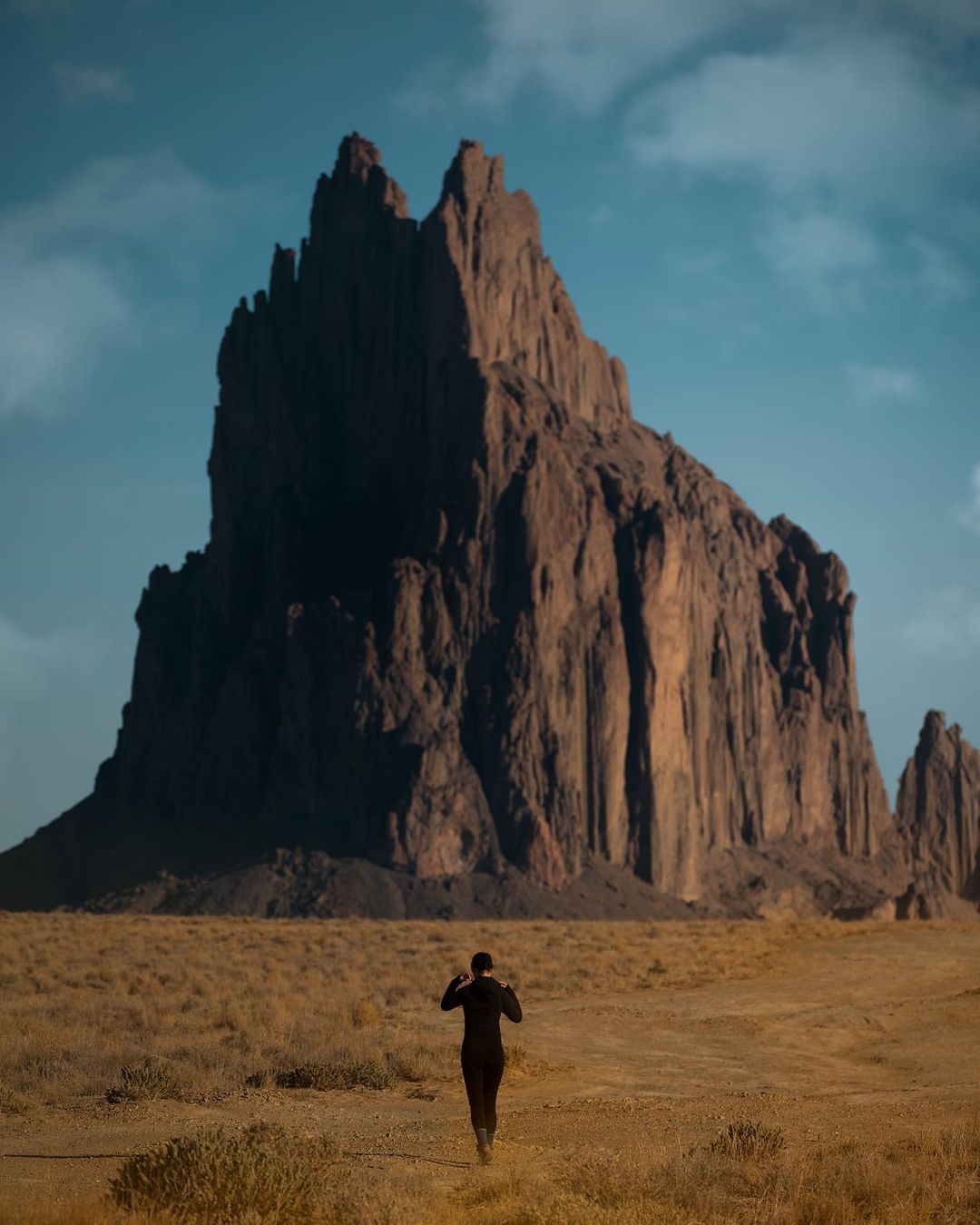 Even with the victory, the bird was still greatly injured during the battle. In an effort to keep the bird alive, Monster Slayer turned it to stone as a reminder to the people of its great sacrifice.

Despite the Legend Surrounding It, Shiprock Is a Remnant of a Volcanic Eruption 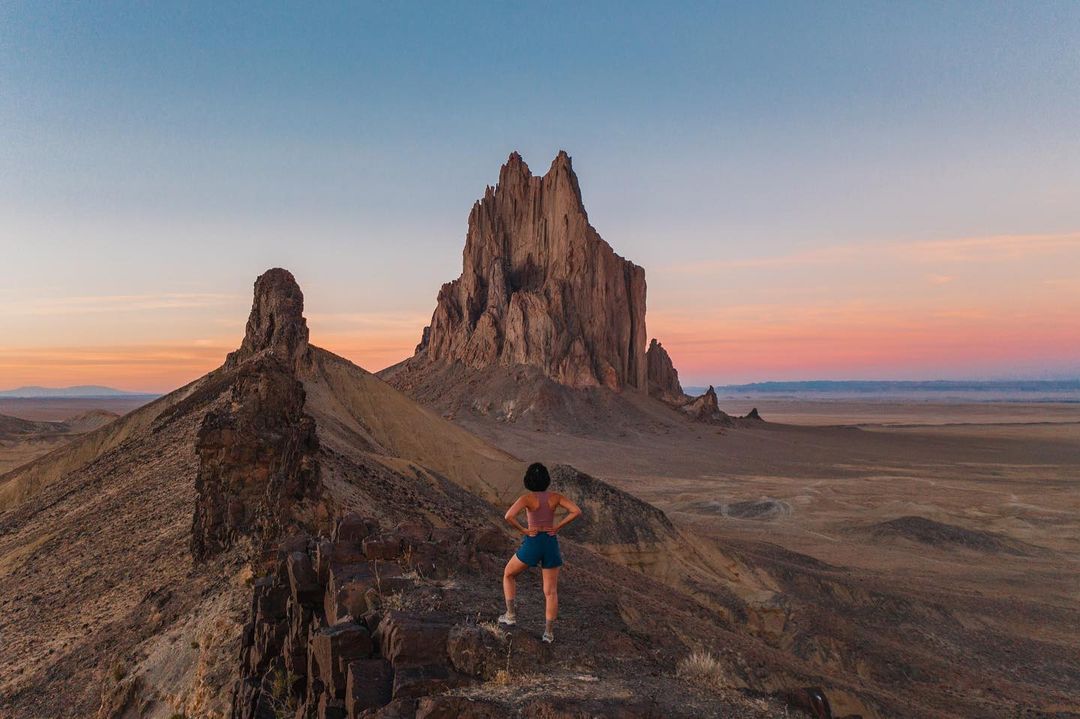 Some people may believe the legend, but there are also those who prefer to stick to the “normal” stories. The Shiprock landform in the New Mexico desert is a remnant of an explosive volcanic eruption that happened around 30 million years ago.

As you may notice, the main part of its landform is high. It rises 600 meters above the ground and is 500 meters in diameter. The neck of Shiprock is made of fractured volcanic rock, or breccia, crosscut by many thin veins of lava. As for its composition, it contains “minette,” some unusual, highly potassic magma compositions thought to form by very small degrees of melting of the earth’s mantle.

When this natural wonder was formed, it was probably 750 to 1000 meters below the land surface. The natural erosion of surrounding rocks played a role in letting it gain its prominent form.

The dikes or the wall-like sheets of lava that seem to radiate away from the neck are also other striking features of Shiprock. There are two dikes visible in the image, and these would have been intruded at some depth below the earth’s surface back then.

The rock formation is sacred to the Navajos. In this case, hiking or climbing on the sacred peak or even in the surrounding rocks is prohibited. You are also not allowed to drive onto the dirt road that leads to the formation. While the place was a prized location for rock climbers back then, a tragic accident that resulted in death caused the Navajo Nation to ban the said activity.

Rock climbing is not just illegal here, but on all Navajo lands as well. Prior to that accident, the famed Spider Rock in Canyon de Chelly and The Totem Pole in Monument Valley were also closed in 1962. The ban was “absolute and unconditional,” because the Navajo people were scared of death and aftermath, as they believe the location can be contaminated by evil spirits. 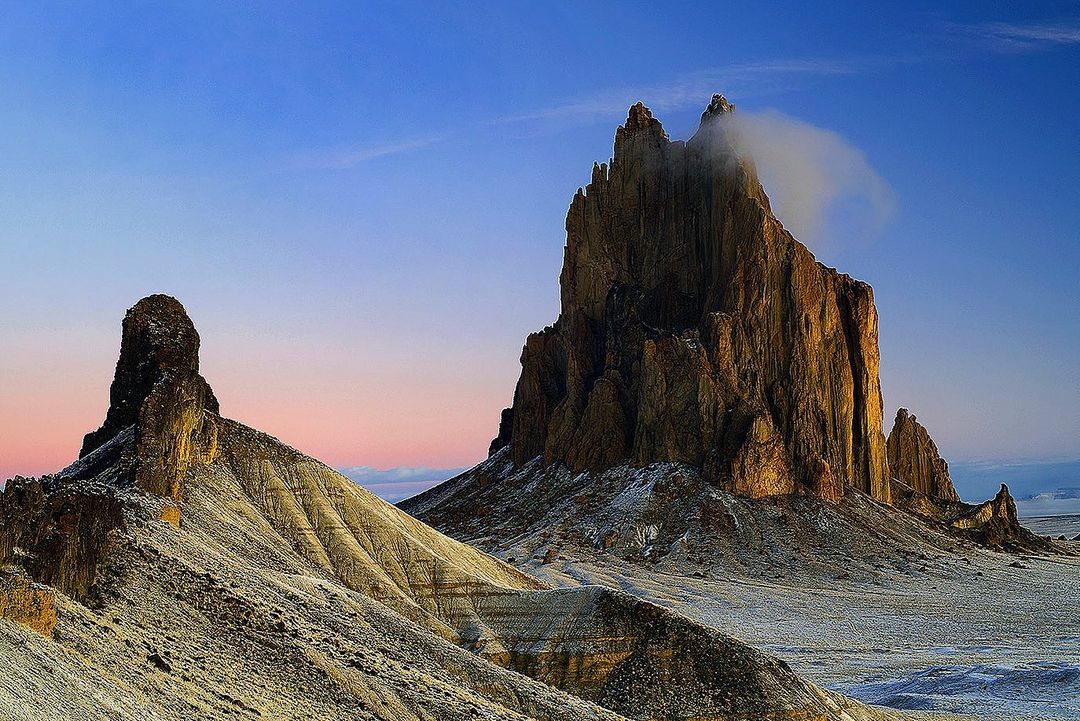 This place is a real beauty. In fact, it looks so unreal it could be something from an alien movie – just like another New Mexico wonder, Ah-Shi-Sle-Pah Wilderness.

Even so, you must remember to admire it from afar. You may view and take photos of the pinnacle from the paved roadway or from the Indian Service Route 13 or from US Highway 491.

As you contemplate the extremes of the landscape: the desert, flat and featureless for miles, your chances of becoming awestruck by incredible and colossal geological bird remains high. 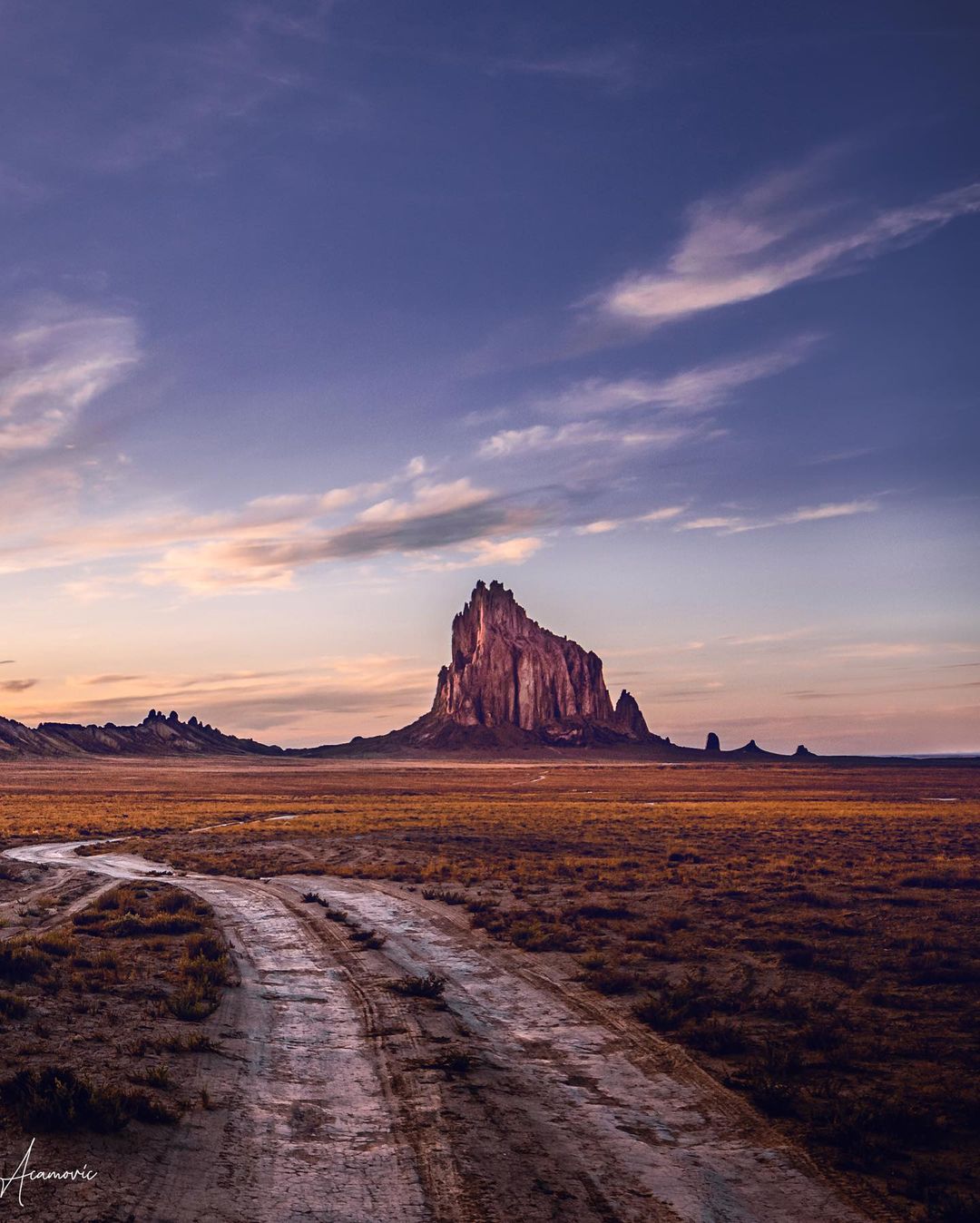 Come here in the morning to see the best views of Shiprock. You’ll change the way you think about the flat and featureless landscape once you see this colossal feature.

Since you are not allowed to camp near the formation itself, you can just head to Farmington (nearest town) and find good lodging. From there, allot 1 hour travel time to get to Shiprock.

This imposing natural wonder is truly a wonderful surprise when you are traveling the New Mexico desert. For more beautiful sights, check out: You Won’t Believe How Absolutely Gorgeous This Mountain Range in New Mexico Is in Real Life and This Paradise in New Mexico to Get Views of Boundless Mountains and Gorgeous Open Meadows.