Learning about a place’s history is definitely an interesting activity that will enrich any of your travels. There is so much to discover across New Mexico, and you are bound to find a natural site or an important town from the past! Well, if you need an idea which place to explore first, we are here to tell you all about Golden New Mexico. You already read about the different ghost towns in New Mexico. Now, you should only learn about one from the gold rush era in the late 1800s! 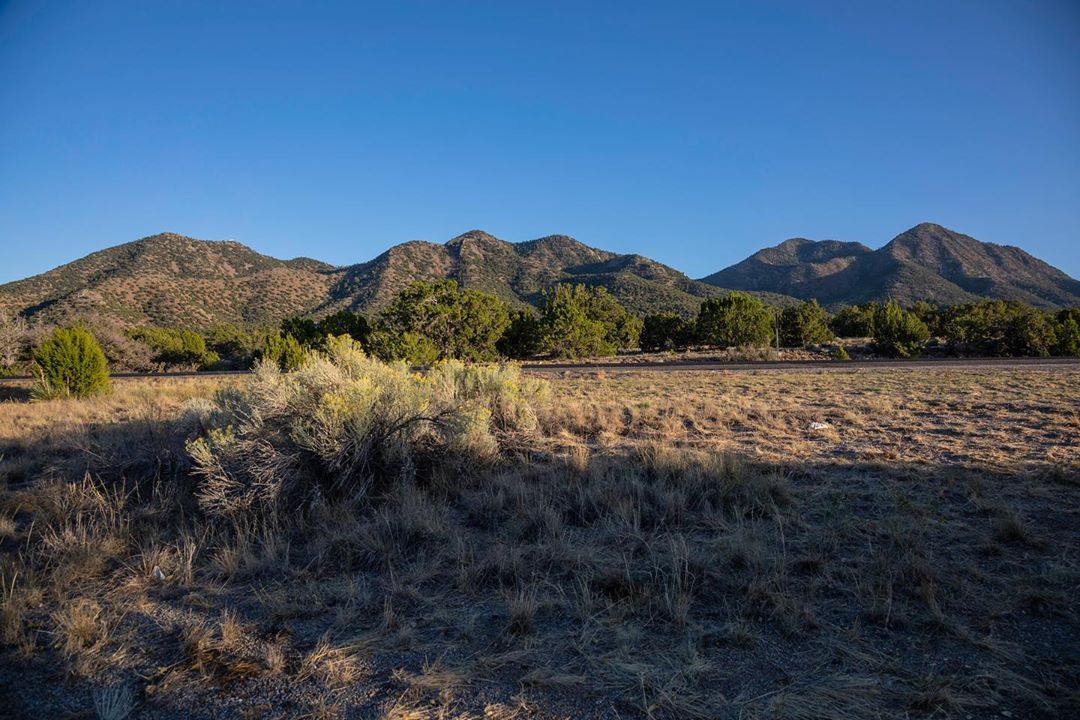 Travelers looking for a good day trip destination need not look further. Golden New Mexico is particularly interesting. The town was founded by the Native Americans and Spaniards a long time ago, even way before American travelers settled in. Then, it began to boom in 1825 when gold was first discovered there.

According to some accounts, placer gold was first discovered on Tuerto Creek on the southwest side of the Ortiz Mountains. Eventually, in the late 1820s, two small mining camps, El Real de San Francisco and Placer del Tuerto, developed as a result of the precious mineral finds.

The town became relatively quiet for decades before companies really took notice of the golden opportunity. When they did, they brought in numerous workers, attracting some individual prospectors along the way.

Golden New Mexico got established in 1879 once its gold rush hit and eventually became a booming gold-mining city in the middle of an entire mining district. Back then, many high-volume businesses opened up such as stores, saloons, a school, a post office, and a stock exchange. This growth led to the popularity of the humble New Mexico town.

However, the gold rush didn’t go on for so long. It actually stayed very low-paced for years, until such time in 1928 where the town lost so many residents and the businesses had to shut down. So was the fate of many mining towns around the world.

Now, It’s a Ghost Town With Crumbling Ruins of the Old Establishments 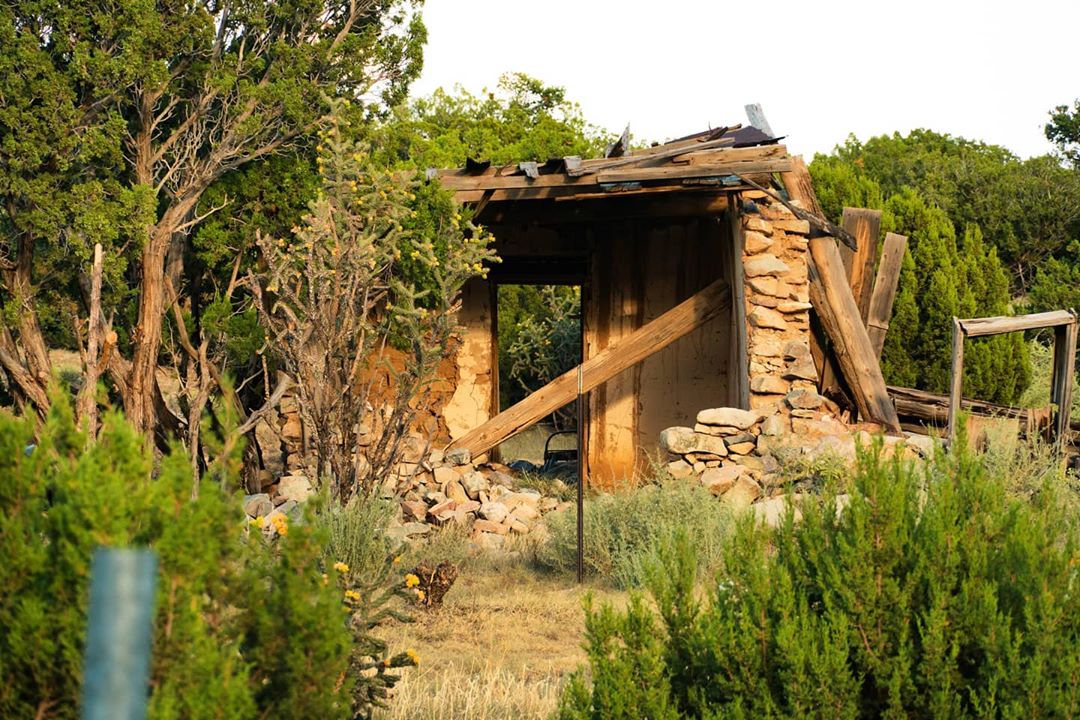 Golden New Mexico has become a famous ghost town in the state. If you come here, you will still see the ruins of old establishments, with little to no people left. Of course, you might see some other locals and tourists exploring the place, or even taking some good photos. 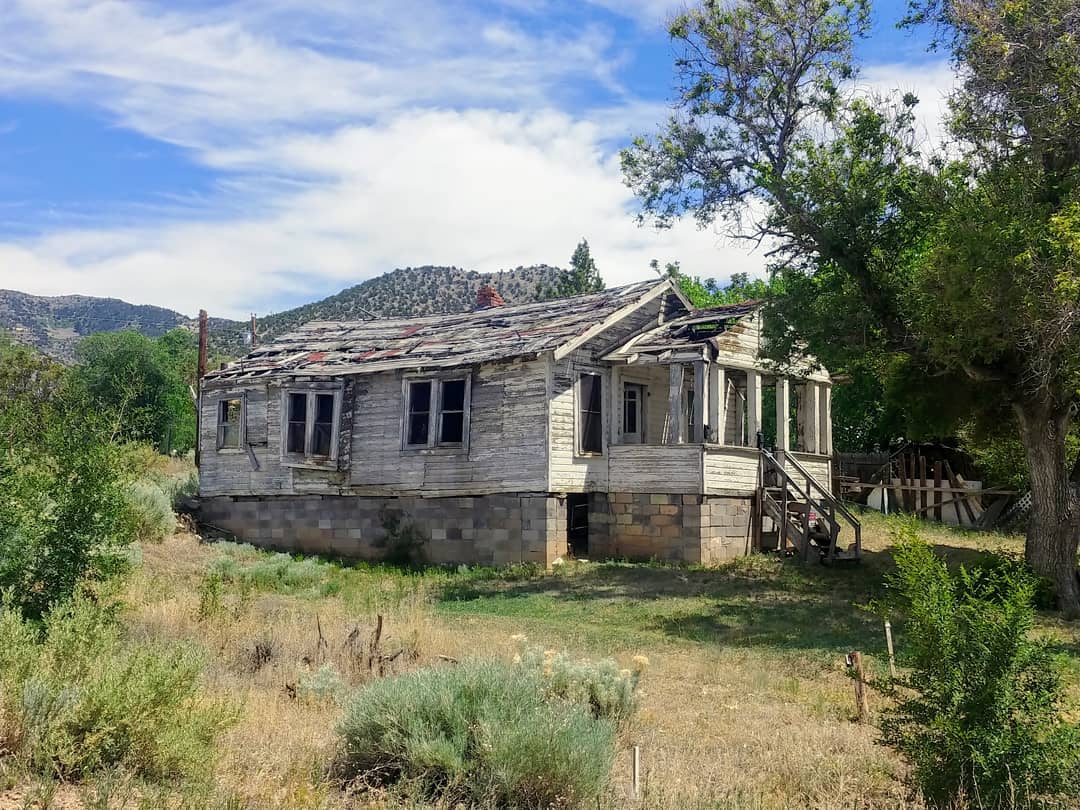 According to visitors, the only store that is open for operation is the Golden General Merchandise Store, or Henderson General Store, which was first opened in 1918. 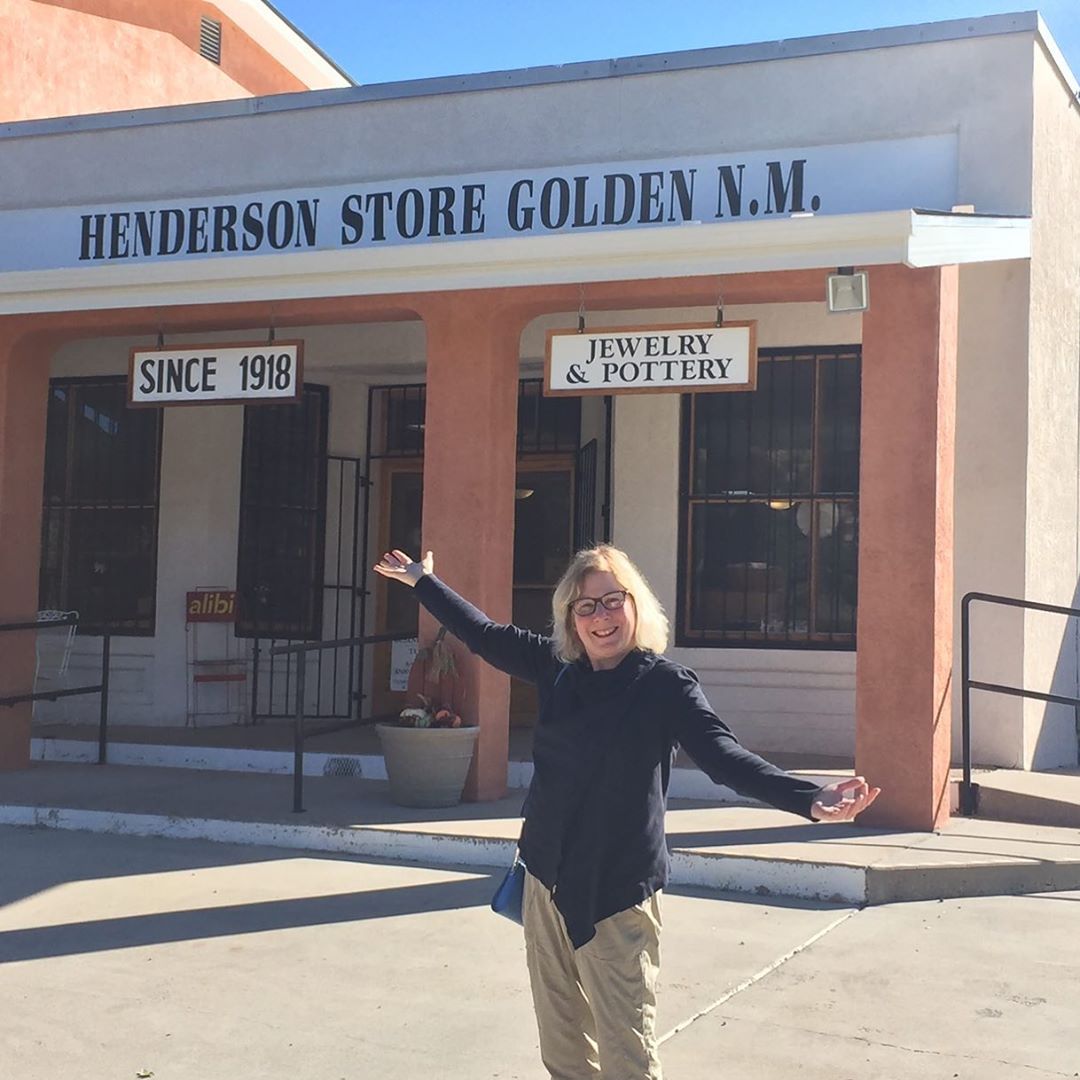 The store specializes in high-quality Southwestern American Indian jewelry, rugs, and pottery. It is a good stop if you are traveling along Highway 14 North or the Turquoise Trail Scenic Byway.

There are many ghostly ruins and old structures that look inviting for those who love a scary good time! You can even try hunting down a ghost if you are brave enough. 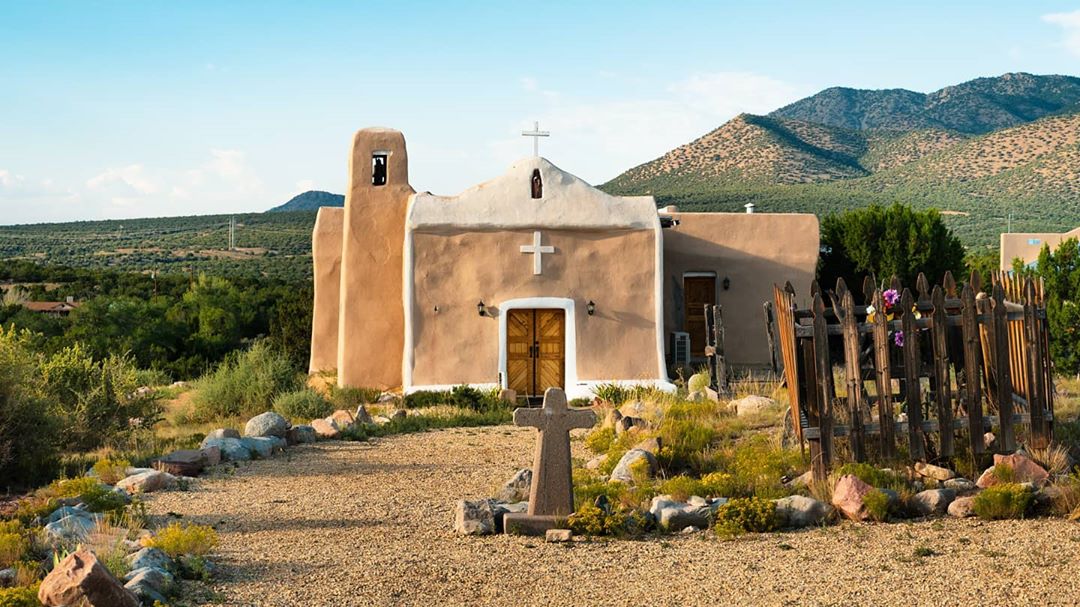 You’ve probably seen a lot of photos of a church from travelers passing by the Turquoise Trail. Well, if you’re curious about this stop, it’s actually the San Francisco de Asis Catholic Church. It is one of the most photographed sites along the highway and was originally built in the 1830s. It was abandoned for twenty years, but now, it holds mass every Saturday afternoon.

The church was built to honor St. Francis of Assisi while the town was growing from a gold strike. It holds an annual fiesta beginning with a mass, followed by a procession lead by Matachines dancers. During this time, the graves in the cemetery are blessed, and the procession will continue around the area and return to the church. The ritual was adopted from medieval Spain.

Churchgoers will also be able to buy food and raffle tickets. Finally, the celebration of the feast of Saint Francis of Assisi is concluded by a cake walk!

P.S. While there’s hardly anything here because the church is surrounded by ruins, this still remains as one of the most stunning churches in New Mexico.

The Bottle House is Worth Looking at Too! 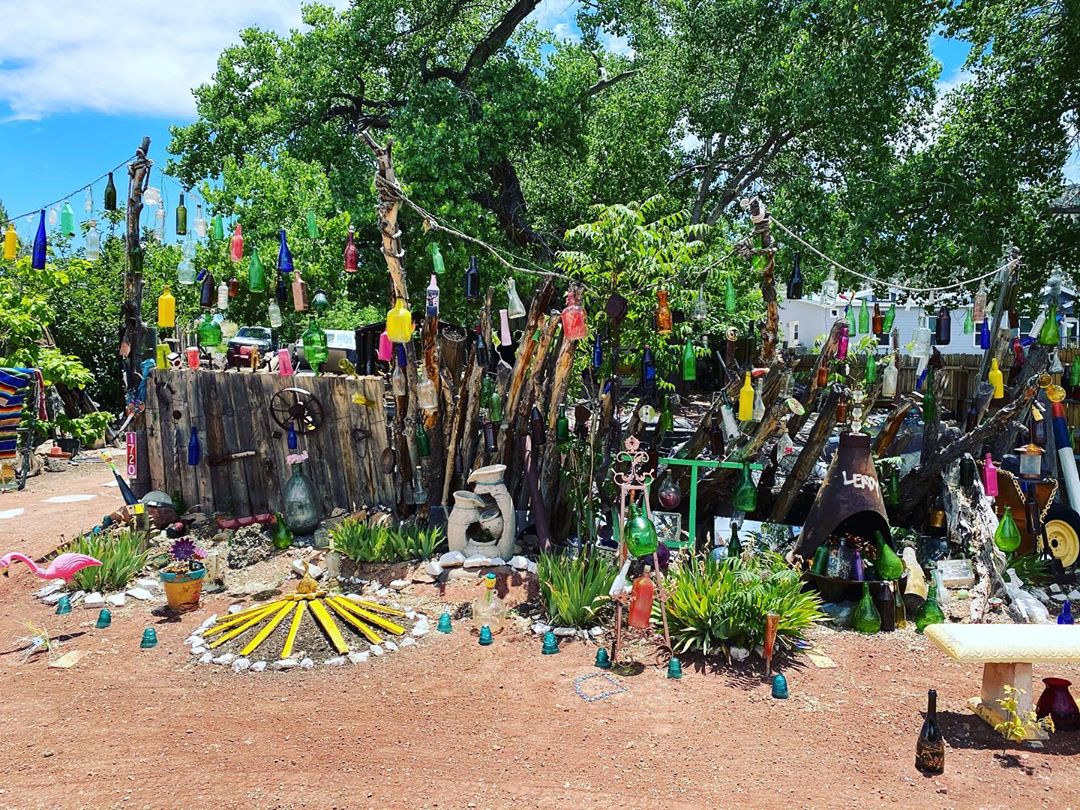 Count on Golden New Mexico to show you wonderful surprises in your travel. While traveling down Turquoise Trail, you should take a look and say hello to Mayor Leroy Gonzales in his wonderfully-decorated property. 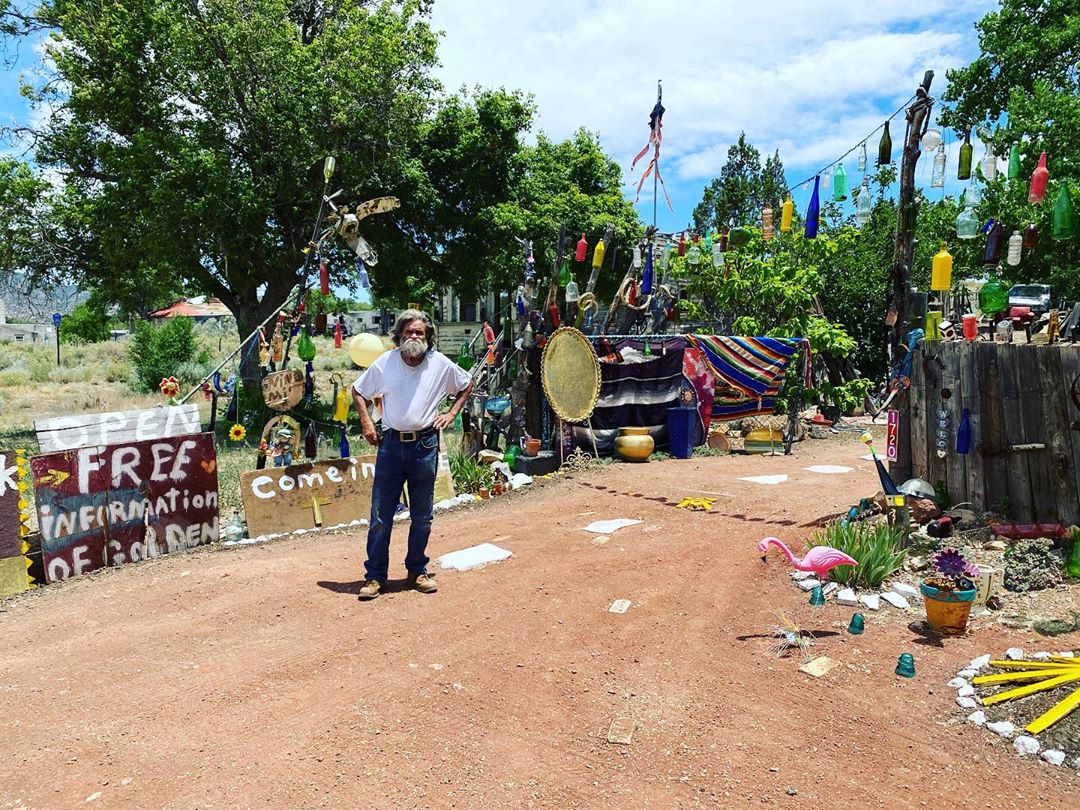 It is adorned by bottles, knick knacks, and all kinds of tools you wouldn’t expect from a normal or regular house. 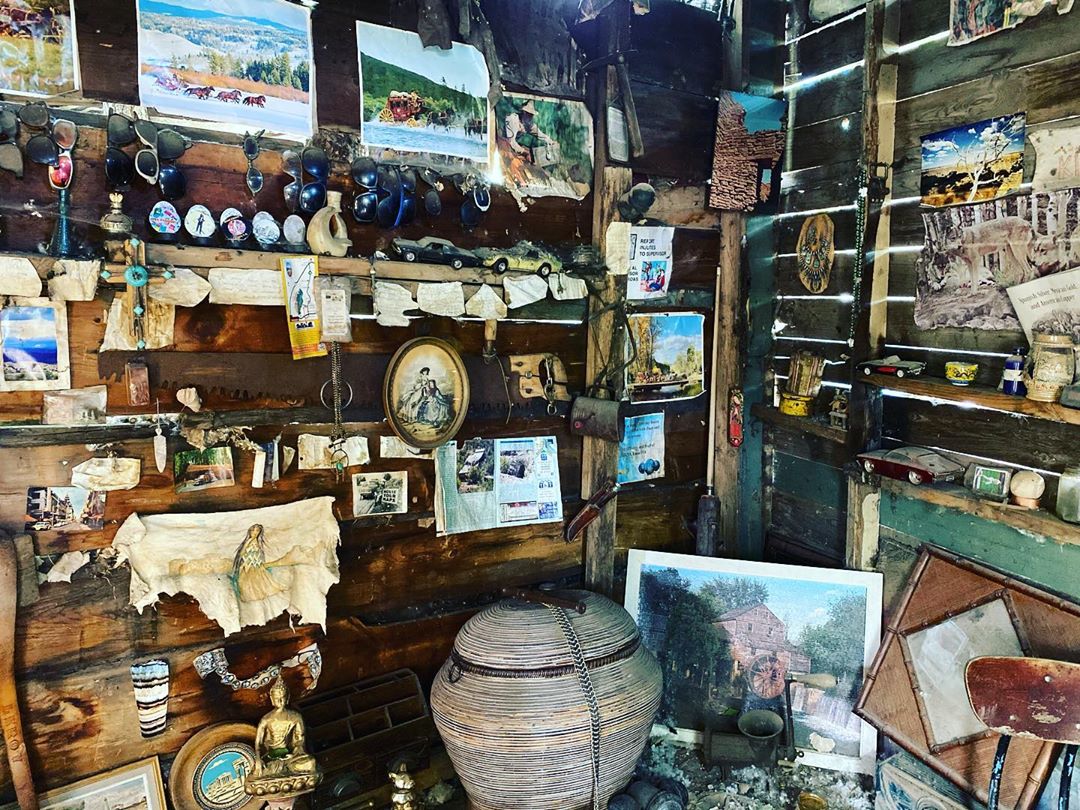 He is quite a character, so we’re sure that you’d fancy talking to him! In fact, you can ask Leroy everything you want to know about the Turquoise Trail because he has a good grasp on its history. The best thing about visiting him is that there is no appointment necessary. He would be happy to introduce guests to his work, so he usually leaves his gate open even if he is not at home. 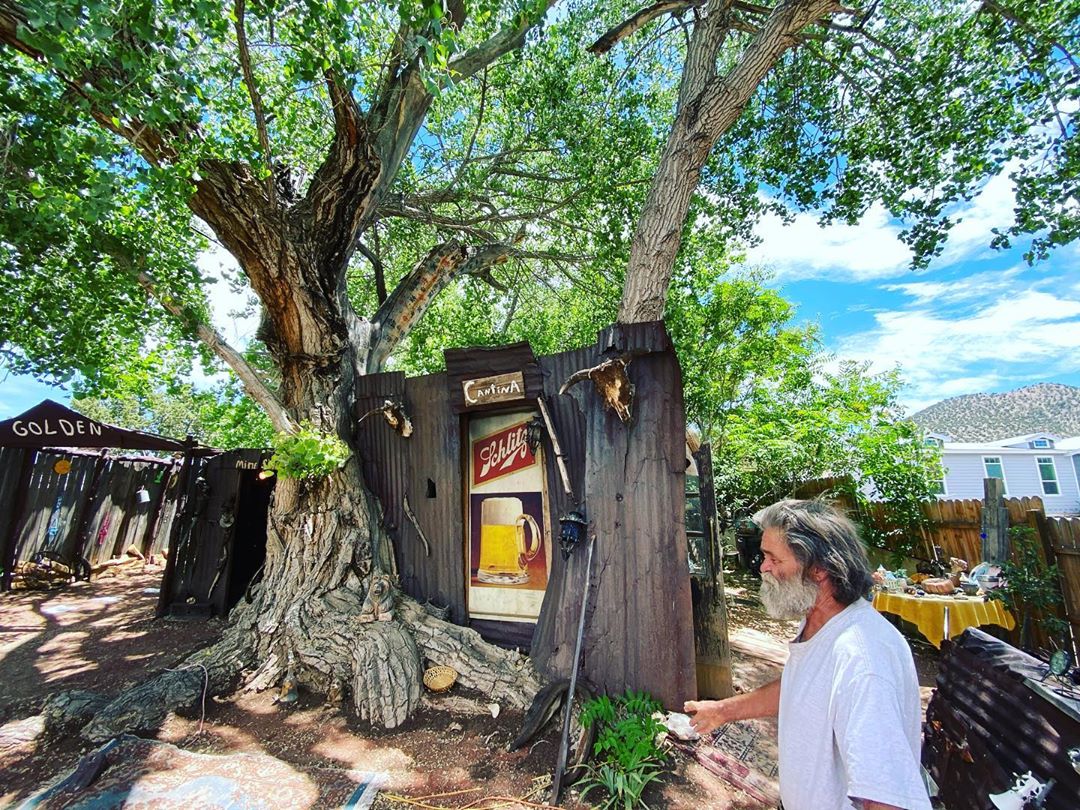 Perhaps this is the Mayor’s attempt to recall the glory days of the community, as well as his prominence as a leader. There is no doubt that his work has the ability to capture the attention of anyone! 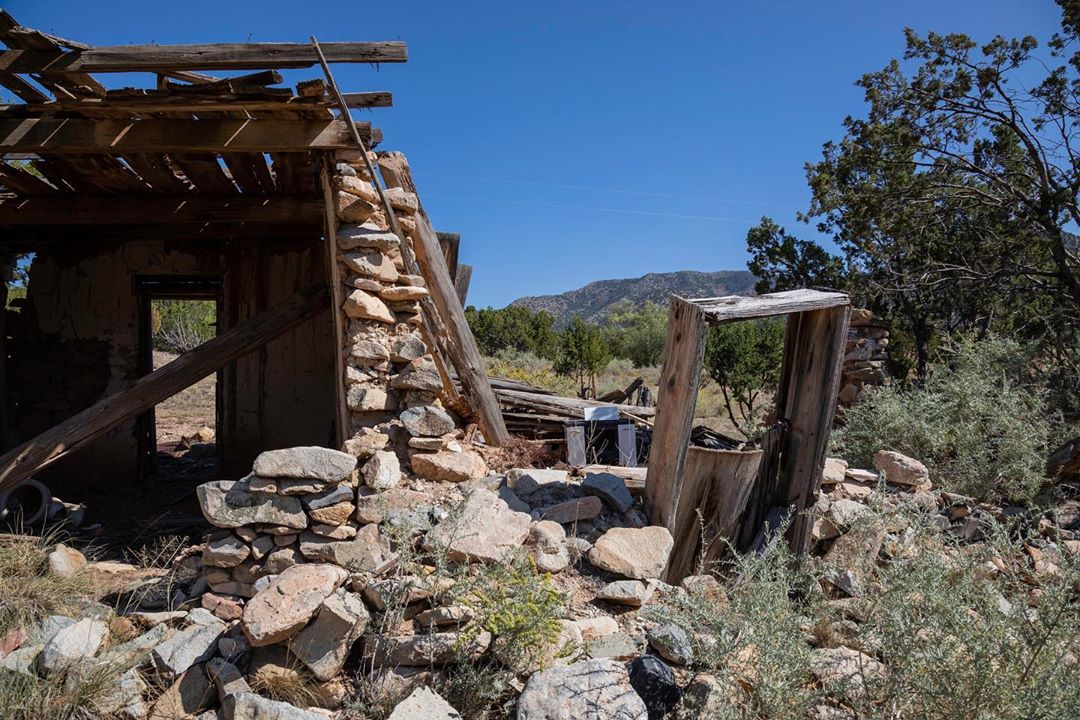 You can visit Golden New Mexico anytime. It is a must-see and there is no fee required to look around. You will also be able to enjoy a cool winter here, as well as a warm summer.

Golden New Mexico is a “placer town” in an area of other towns of the same nature. It just so happens that Golden is the town that survived. Naturally, it became the center of the new gold-mining district and soon grew to support several establishments. In 1880, a post office was also opened.

There is an old church, the San Francisco de Asis Catholic Church, that was constructed in the early 1830s. It still stands to this day. This church was restored by historian and author, Fray Angelico Chavez, in 1960, while he was the padre of the St Joseph Church in Los Cerrillos.

When Golden New Mexico was slowly “dying,” the abandoned buildings tumbled down between its few remaining occupied structures. Vandalism became prevalent (and was out of control), but some areas still served good photo opportunities.

What do you think of this ghost town?

If you want to see other haunted or interesting sites, choose your pick from these articles: These Underground Lava Tubes in New Mexico Will Take You to a Dark but Cool New World and 10 Breaking Bad Film Locations You Can Visit in New Mexico.

Witness the Fantastic Arizona Art Installations for Yourself Until Next Week, November 15