Frank Lloyd Wright is one of the most celebrated and famous architects in the world. Many would say that he made a big impact in American architecture, having developed his own style of organic architecture. We’ve already featured his unique house that is for sale in the affluent Arcadia neighborhood in Phoenix. But there are other Frank Lloyd  Wright buildings in Arizona you should know about. Check this out: 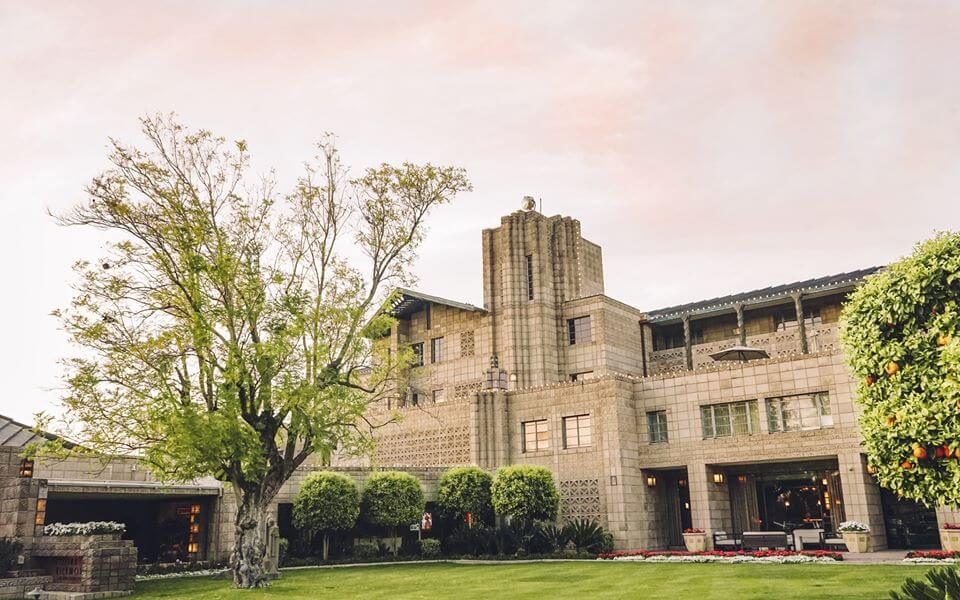 This stunning legendary landmark hotel boasts a colorful history and superior service. It is set within 39 acres in the heart of Phoenix and is a great place to stay in given its luxurious accommodations. It is also home to lush gardens, gourmet restaurants, and other top-notch amenities.

The Arizona Biltmore Hotel was actually designed by a Harvard graduate named Albert Chase McArthur who had studied under Frank Lloyd Wright. But many people still give credit to the latter architect. After all, the master was also hired as a consultant for a brief period of time, so he definitely has some influence on the whole project. Arizona Biltmore Hotel became an Arizona landmark since its opening on February 23, 1929.

Notable Frank Lloyd Wright Features: The balcony and geometric massing of the lobby, and the largest gold-leaf ceiling in the world.
Tours Available: Yes (Fees may apply for the tour if you are not a registered guest of the hotel)
Location: 2400 E Missouri Ave, Phoenix, Arizona

The Taliesin West is perhaps the architect’s most famous work in Arizona. It actually served as his winter home and school in the desert, and is now the main campus of The School of Architecture. You might notice that the estate is remarkable and also looks as if the desert surrounding it is swallowing the place in whole.

In Wright’s own words, Taliesin West was a “look over the rim of the world. This wonderful place is indeed the perfect desert retreat, just like this beautiful house with expansive cactus views. 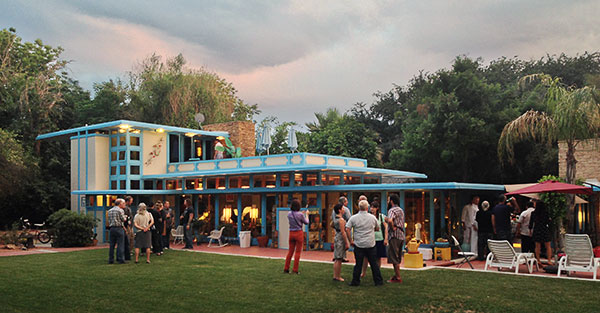 While one may consider Raymond Carlson House one of the more underrated Frank Lloyd Wright buildings in Arizona, it’s still worth featuring. It fairly simple compared to the first two. But there’s a sweet story behind the house. Wright designed this house for Raymond Carlson as a thank you for the editor’s fervent support in publishing his works so generously over the years. You may see some pictures of the house on the internet, but there’s no way to get a full look at the house without being invited. 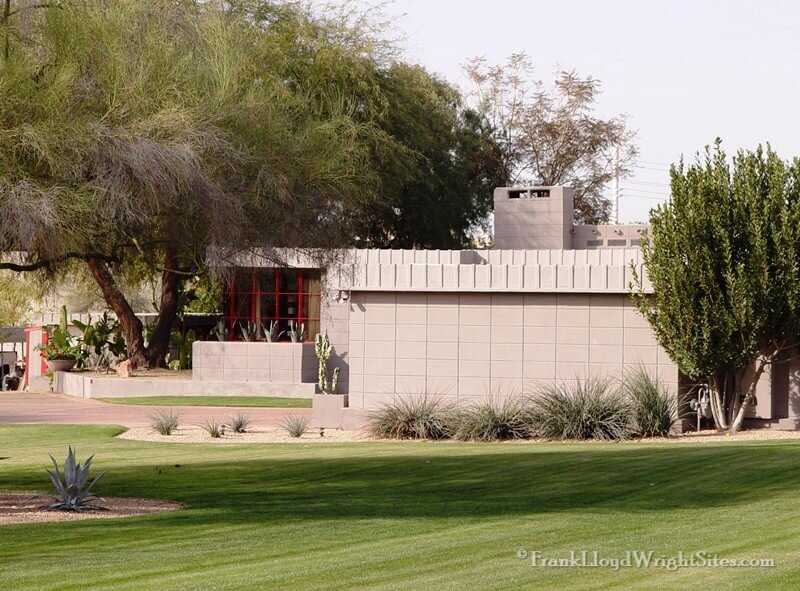 The housing crisis after World War II was a real problem. Therefore, Wright started designing architecture that would turn to be affordable and modular housing solutions for the medium family. The structure of the Benjamin Adelman house consists of blocks molded on-site. Then, these blocks were knitted together into a grid by the use of rebar that ran down groves in the sides of the blocks. Through the years, the house was altered and has lost its true Frank Lloyd Wright charm. 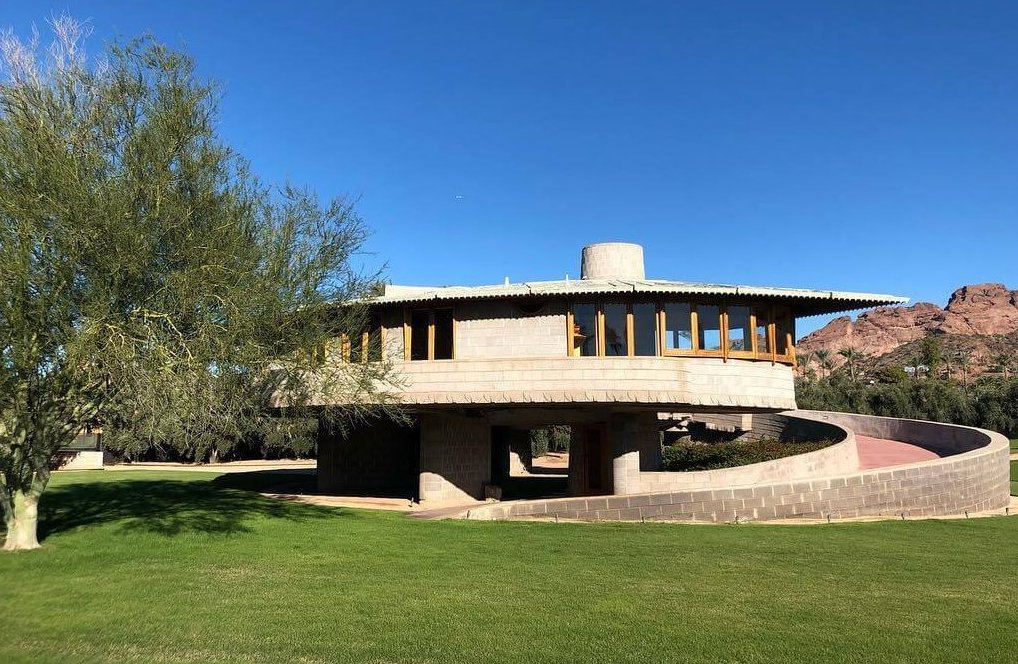 The David Wright House has a medieval yet appealing charm for a castle that looks like it’s about to fly off to the moon. In fact, this is one of only three circular designed homes by Frank Lloyd Wright, which he gifted to his son.

The house is a precursor to the Guggenheim Museum in New York City. And if you’re wondering, the purpose of the spiral design is to cool down the house by effectively capturing the wind. You should also take note that this house is actually on the market for $9,999,999. To learn more about this house, you can check out this article. 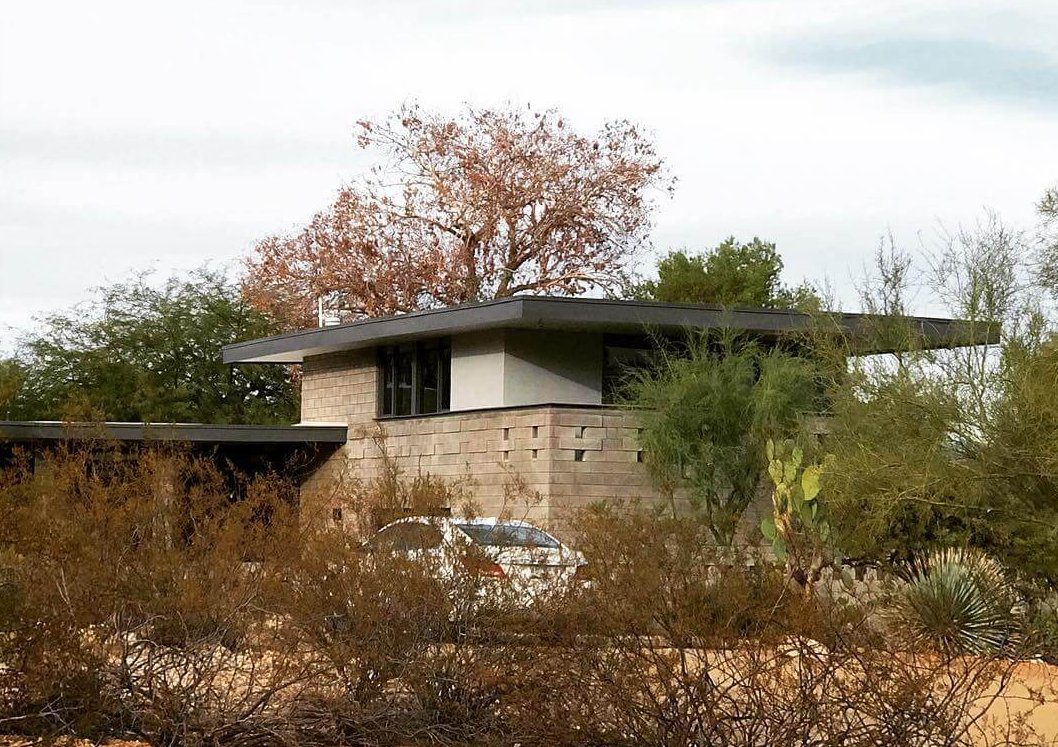 This is one of the Frank Lloyd Wright buildings in Arizona designed for an apprentice. The architect considered this as his testing ground for his standardized construction technique devised to address the housing shortage after World War II. It looks modest, but it’s worth learning about! 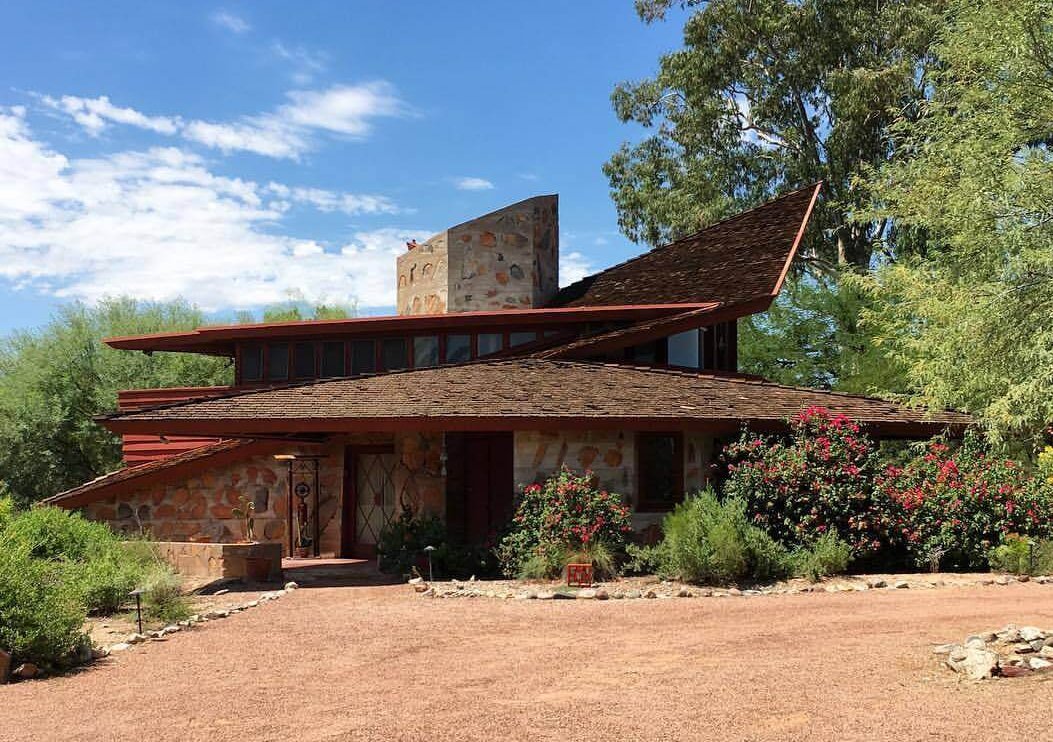 This house is actually just adjacent to the Adelman property. According to stories, Boomer and Adelman often played together at the nearby Biltmore Hotel. Without a doubt, the Jorgine Boomer Cottage is that mark of comfortable desert living! 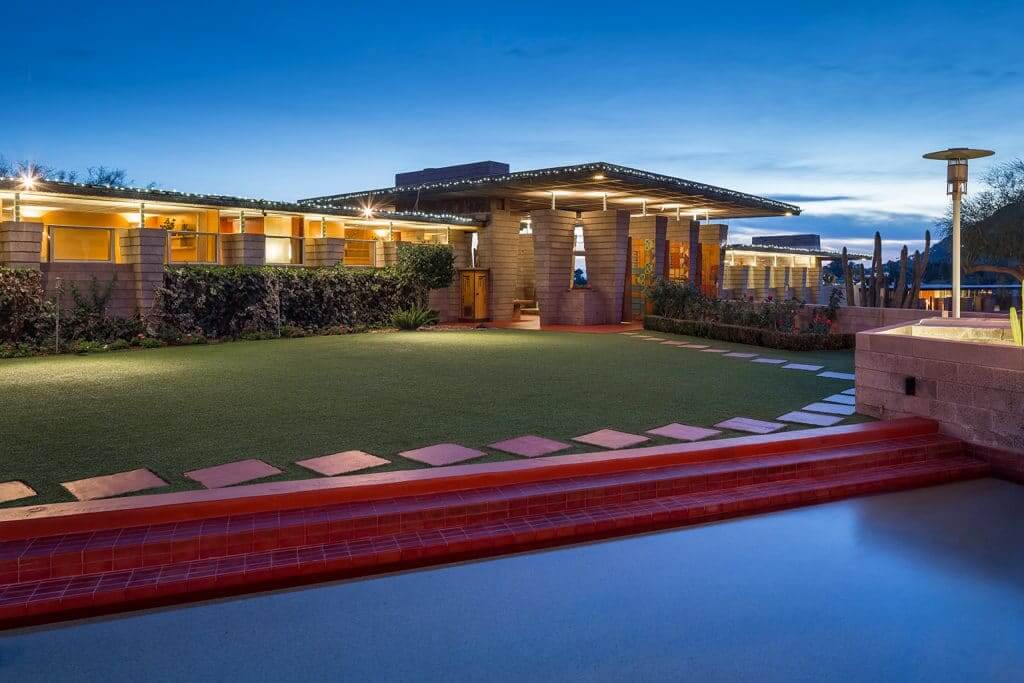 Considered as a true desert-dwelling, the Harold Price house is a truly remarkable work of architecture. This is Harold Price and his wife’s retirement home located on a 9-acre plot on the outskirts of Phoenix. This is now maintained as a private house but is occasionally open for charity events and some public tours. 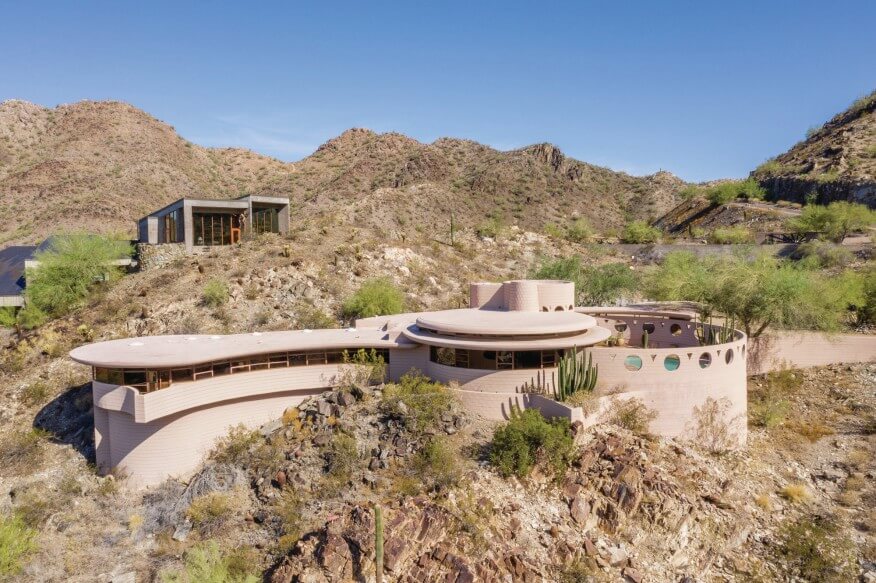 Now we’re talking. The Norman Lykes House or the “Circular Sun House” is one of the Frank Lloyd Wright buildings in Arizona that truly stands out in terms of design and size. This wonderful work comes from a time when the famous architect embraced the geometry of circles.

This was his final design before passing in 1959. John Rattenbury, Wright’s apprentice, realized the design and completed the home in 1967. 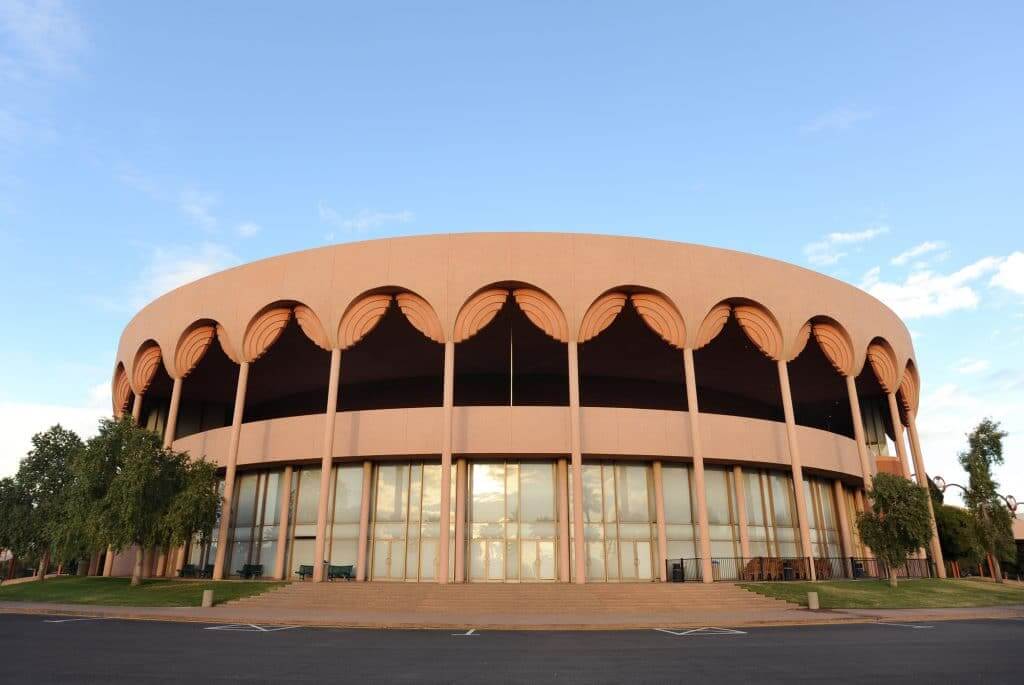 Come drop by Arizona State University and you’ll see one of Frank Lloyd Wright’s buildings in Arizona. The Gammage Auditorium is a multipurpose performing arts center inside the university named after Dr. Grady Gammage. Gammage was a legendary ASU president. He is known for successfully leading Arizona State College’s victorious campaign in the state legislature for a name change to Arizona State University. 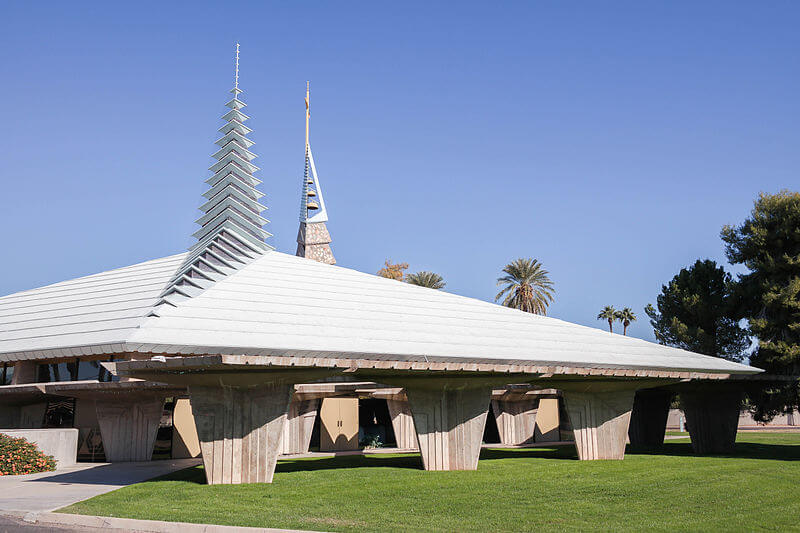 One look and you’d already mumble the words, “This is just stunning.” The First Christian Church truly reflects Frank Lloyd Wright’s architectural style. It embraces such a bold design with its triangular spire (with four sides), as well as the concrete walls, and native stone. Isn’t it spectacular?

Notable Frank Lloyd Wright Features: Church spire that rises seventy-seven feet to the heavens
Tours Available: No (if you know someone from the church office, they might be able to show you around)
Location: 6750 North 7th Avenue, Phoenix, Arizona

Which among the Frank Lloyd Wright buildings in Arizona is your favorite?