Did we get your attention with Orochimaru? We sure hope so. If you’re a big fan of Naruto, then you definitely know this former renowned ninja of the village of Konohagakure. If you’re living in Arizona, there is an attraction that you might find particularly interesting. This attraction is the Rattlesnake Bridge, and it will really remind you of Orochimaru. Are you geeking out already? That makes two of us.

The Rattlesnake Bridge serves as both the bicycle and pedestrian bridge over Broadway Blvd. at the Barraza-Aviation Parkway, just east of downtown Tucson. It is definitely an eye-catching structure because it’s not like the usual bridge you see in other towns. The artist behind this beautiful creation is Simon Donovan. The bridge was designed with the local wildlife in mind. 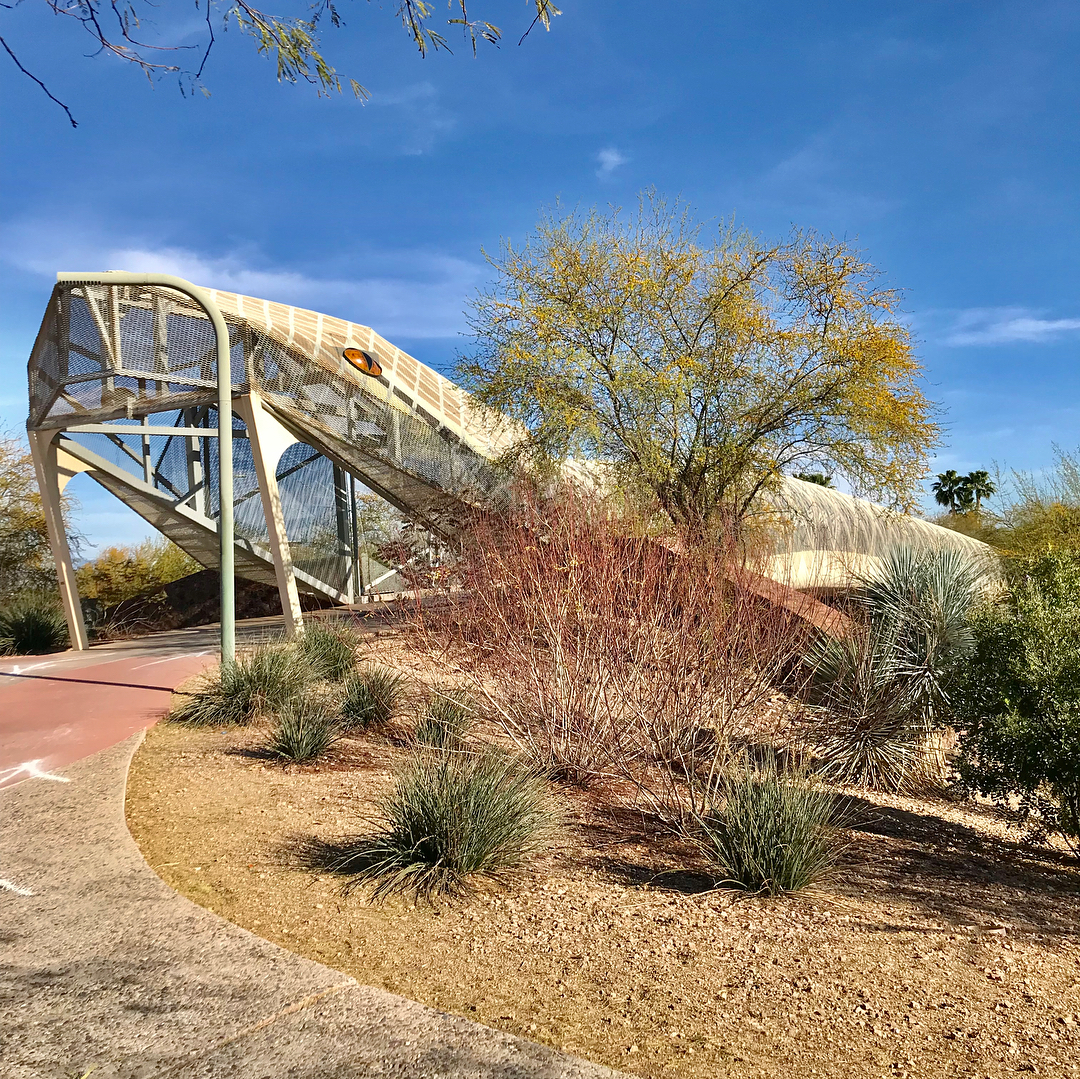 The structure is actually really abstract, but many say it’s biologically “accurate.” The one end of the entrance displays a massive snake head with 10-foot-tall diamondback fangs and sinister reptilian eyes. 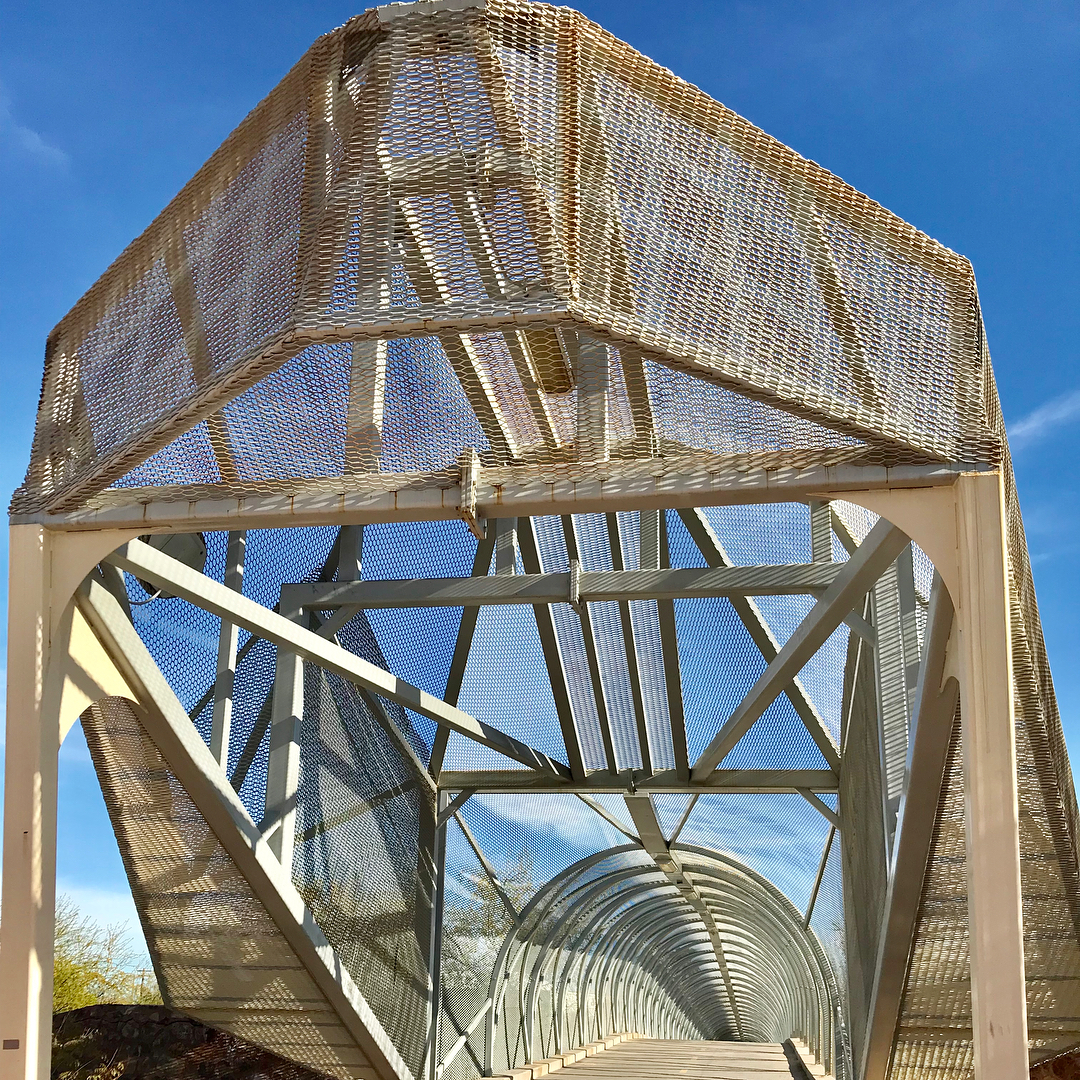 The metal mesh also embraces the whole bridge to represent the hues and gradient of a real rattlesnake. 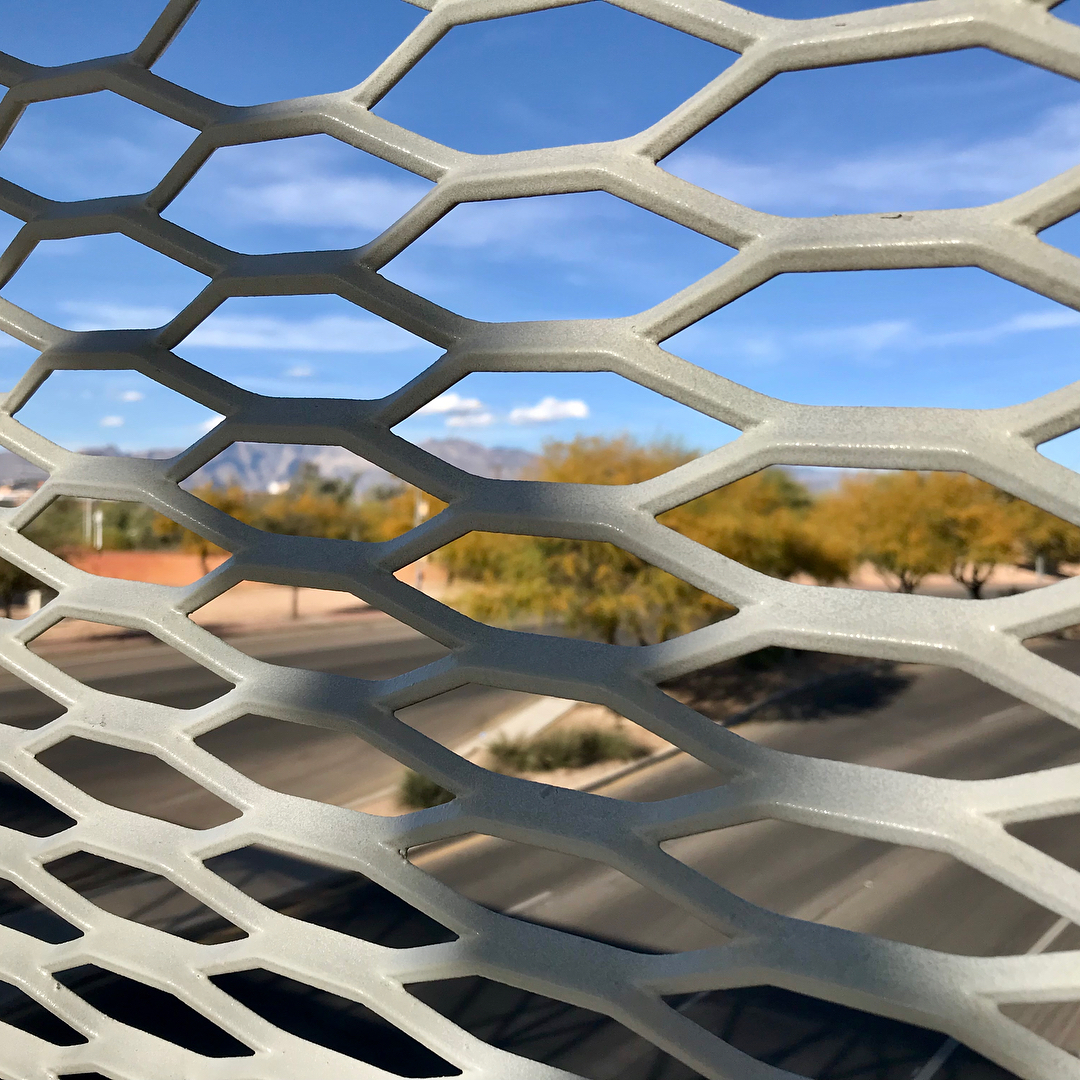 You will be amazed by the details. It might look simple from inside, but it’s a real piece of work if you look at it from afar. 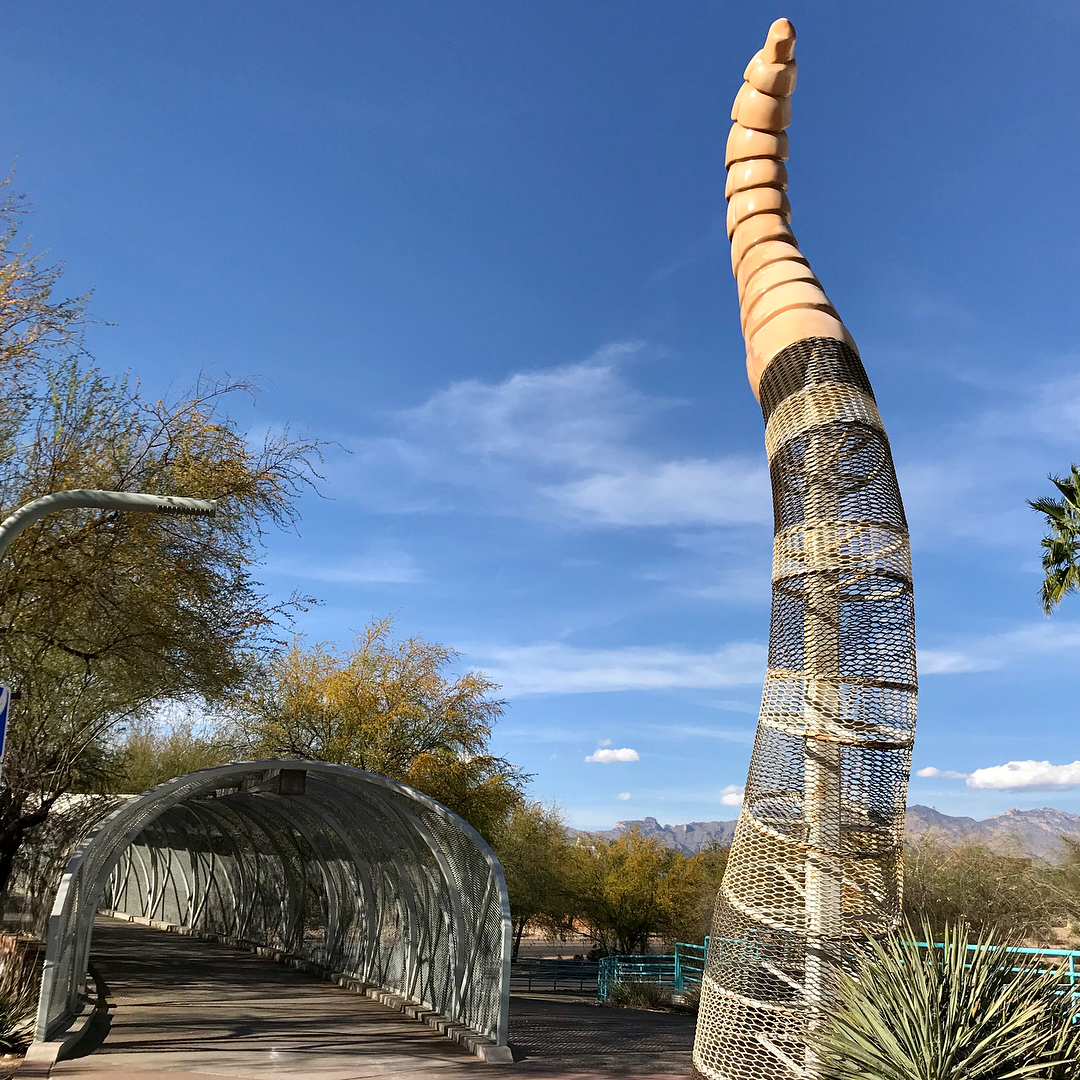 At the end of the bridge, you will see a tall statue or a tail rattle that amazingly juts 30 feet out of the ground. It looks so awesome and you’ll think you just summoned Manda (To be fair, he’s not really a rattlesnake, but he’s still a big snake).

The bridge is really eye-catching. The artist behind this bridge’s design won an award from the Federal Highway Administration as one of the nation’s best road projects. We just think it is well-deserved. If you look at this bridge from afar, you’ll see that the hollow “stomach” of the snake is the main bridge where people pass by and take photos. Well, who wouldn’t stop for a photo when you are inside a giant metal snake above a busy highway?

Tucson is known as a city that inspires creativity, and has a devotion to public art. This one right here is a good example, huh? 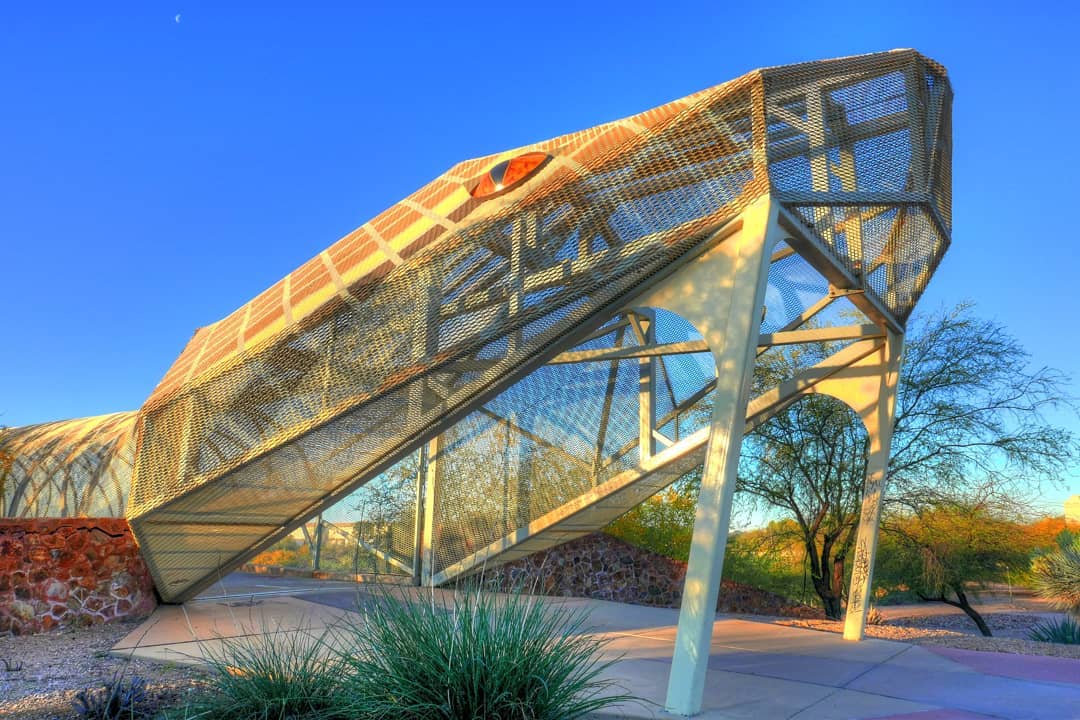 That’s what we feel. If you’re not familiar with Orochimaru, he is a fictional character from the popular manga “Naruto.” He is a popular ninja from the village of Konohagakure who is known for his abilities and his thirst to learn all jutsus. Orochimaru is largely associated with snakes because he frequently summons these animals in battles, and uses them to attack other ninjas or carry out other tasks. Not to mention, he looks like a snake himself with his pale skin, snake eyes, and even sinister smile. His overall personality and even name are snake-like.

If you look at the Rattlesnake Bridge in Tucson from afar, you might think Orochimaru summoned the snake himself. After all, he also summoned the large snake Manda who helped him from time to time in the manga and anime. It’s really interesting. But wait until you see it from up close. You will really be amazed!

The Rattlesnake Bridge Is Really an Example of Big Functional Art 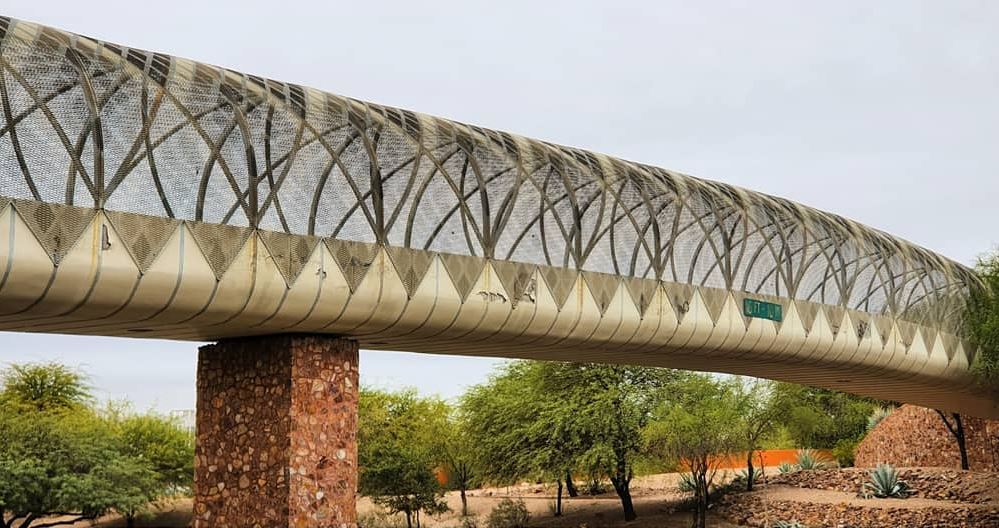 Forget about the usual bridges and just focus on this amazing work of art. Artist Simon Donovan designed this bridge with the local wildlife in mind. You have to admit, he really did an amazing job. At one end of the entrance, there is a massive snake head with 10-foot-tall diamondback fangs and sinister reptilian eyes. On the other end, you will see a tail rattle jutting 30 feet out of the ground, and it looks so realistic. The whole bridge is wrapped with metal mesh to represent the rattlesnake’s skin.

The cars passing beneath the snake bridge will also see the accurately-spaced segments of the beast, which is actually the stomach. There are also linings that really depict it as the belly. It’s amazing! 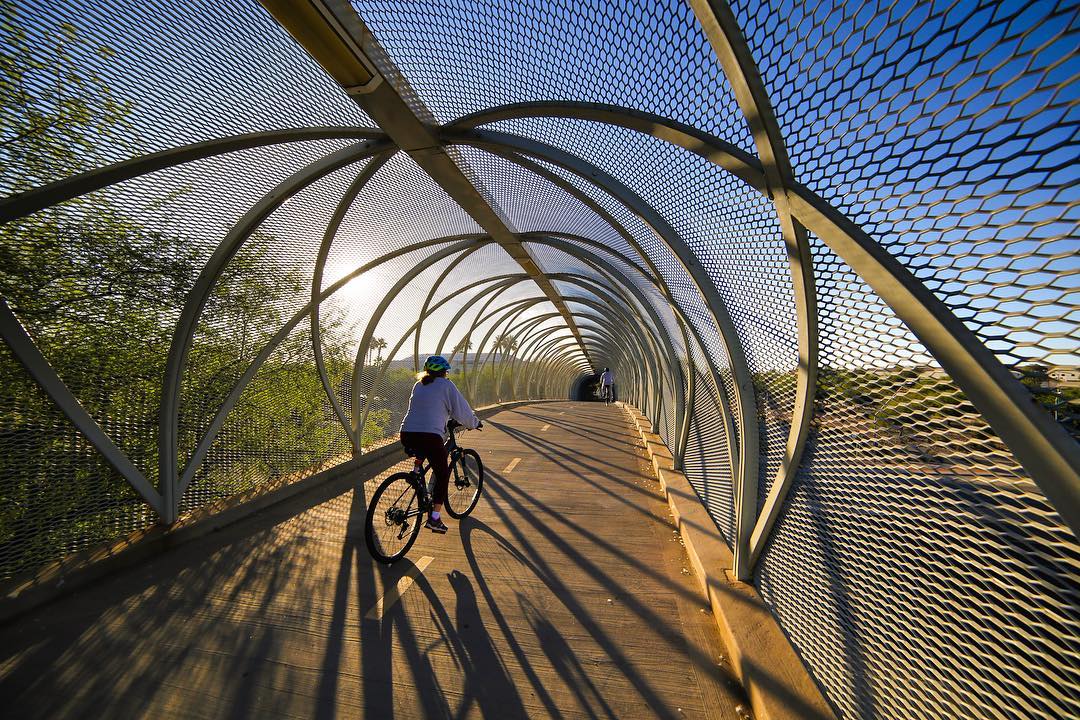 When the 280 ft.-long bridge that connected the Aviation Bikeway with the Iron Horse Neighborhood and 4th Avenue was first built, a lot of locals were against it. They felt it was ugly, garish, and cheesy. However, the artist’s vision won and the bridge was constructed, and still stands up to this day. Back then, you will see the snake’s eyes light up at night, making it all the more realistic and scary. There was also a motion sensor that triggered an amplified rattling sound that will make you jump, run, scream, or bike away in fear. If you are easily startled, this might conjure nightmares. On the other hand, this might give you a good laugh once you realize how funny and scared you looked.

The Rattlesnake Bridge may be an example of big functional art. Unfortunately, the maintenance budget is not quite what it should be, so it’s not properly kept. The Tucson Department of Transportation has had its funds for art maintenance eliminated. If you check out this bridge today, you will notice that the paint is already peeling off and some parts of the concrete are already cracked. The eyes also no longer glow, and there’s no surprise rattle at the tail end. Who knows? Maybe one of these days, it will grow new skin.

It’s still a good place to visit when you’re out biking. 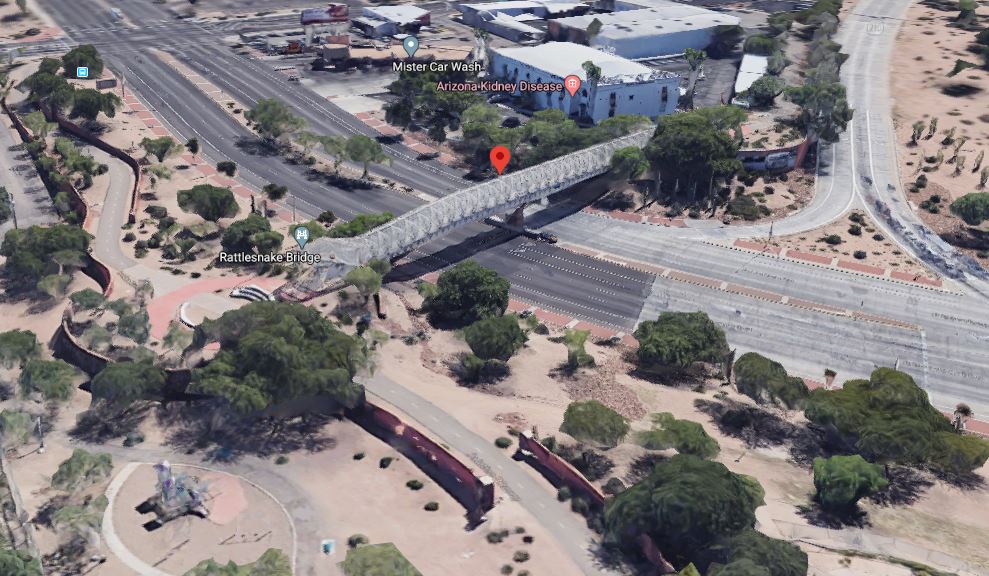 Go to Google Maps and look at it from the Globe View. Only then will you be able to appreciate its full beauty.

The bridge isn’t really trafficked, and you are free to pass by or even take photos without the unwanted crowd.

Some locals may hate this giant rattlesnake, but you can’t deny that it’s amazing how a giant reptilian vision can serve as a steel overpass! The landmark project was constructed more than 15 years ago, but it still makes a statement. The artist said that when the bridge itself had yet to be designed, the local government just wanted to see “surface enhancement.” Instead, he realized the opportunity to direct the design of the bridge itself. According to him, it was an example of functional art with the enclosed metal-cage top and a concrete bottom and a long and narrow structure. He also added that a rattlesnake was certainly an “obvious choice” as inspiration.

Where can you see this bridge?

Come check it out at night because it’s just so nice to look at. You can also take advantage of this striking landmark and get some photos taken. The metal mesh looks great and a bit artsy from inside.

Do you want more unique and amazing attractions? Read our article about seriously weird roadside attractions. While you’re at it, why not stock up on a fantastic variety of specimens by visiting this small yet fascinating taxidermy place in Phoenix.

6 Best Places to Have Lunch in Prescott Arizona

Witness the Fantastic Arizona Art Installations for Yourself Until Next Week, November 15