During tough times like this, we all need a good laugh to keep us sane. Stuck at home? Well, we have a few Arizona memes we hope could give you a great laugh especially if you’re from the Grand Canyon State! From the diverse weather, roads, and culture, people sure are quirky enough to think of something fun for everyone.

Here are 11 hilarious memes you’ll only understand if you live in Arizona:

1. It’s finally fall in Phoenix! Do you know what that means? 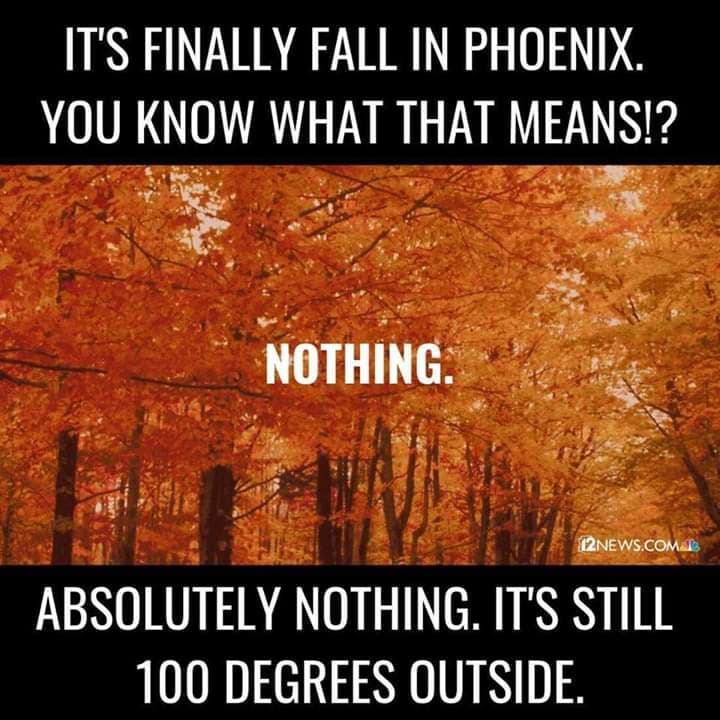 When it falls in the capital of the Grand Canyon State, nothing changes in the weather, they say. But hey, the color of the license plates do! That’s something to look forward, right?

2. Looking for Arizona? Say something and they’ll come out. 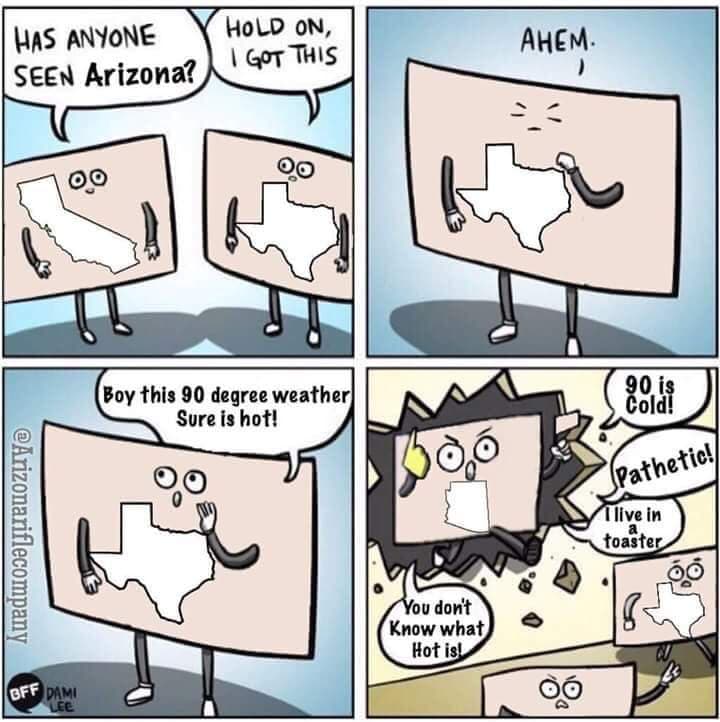 The Arizonans are going to come after you if you complain about that 90-degree weather in your state. People from Arizona would say “Never complain about something this little.” Because as we all know, that’s a normal thing here.

3. A Fact: Arizona’s closer to the sun than the earth. 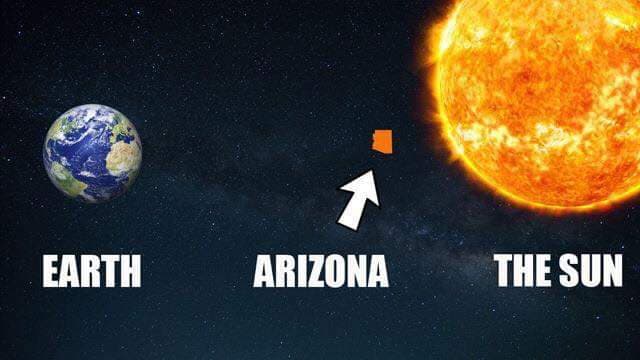 Arizona decided to remove itself from the Earth and go back near to where it belongs, the Sun. This just shows that Arizona’s too hot for the world to handle. 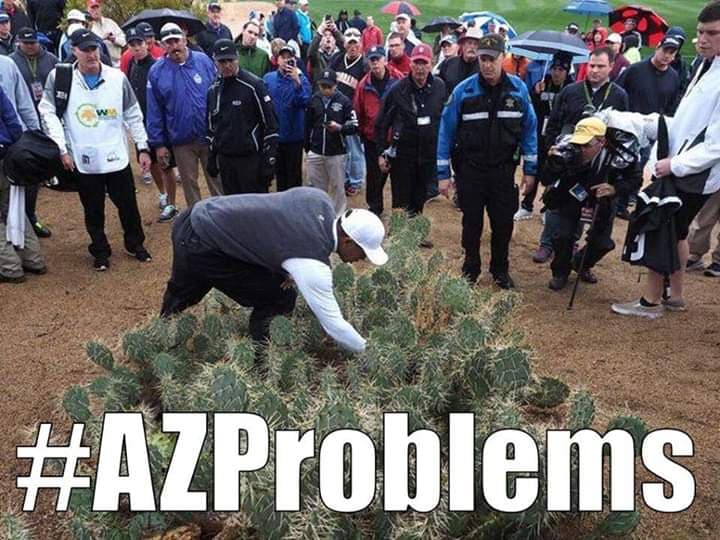 Of all places where your golf ball can land, it chose to be in a bundle of cactus. Imagine the struggle of getting it out.

5. No matter what happens, do not peek! 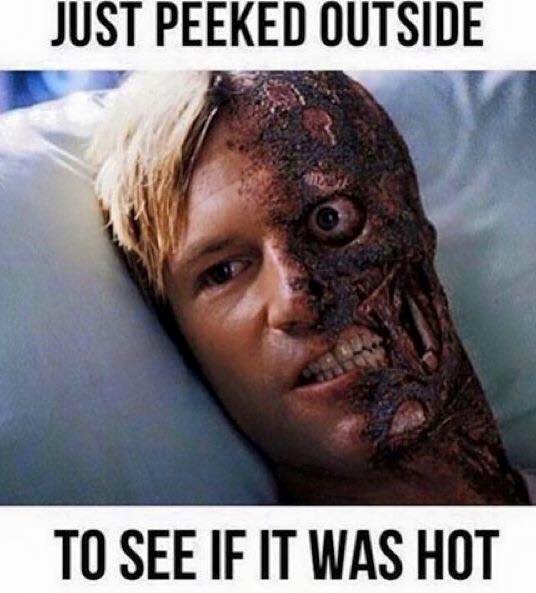 You already know the answer. Why would you risk burning your face like that? Come on. What is wrong with you?

6. Boy, are you so wrong. Should we give you a list of all our beautiful natural wonders? 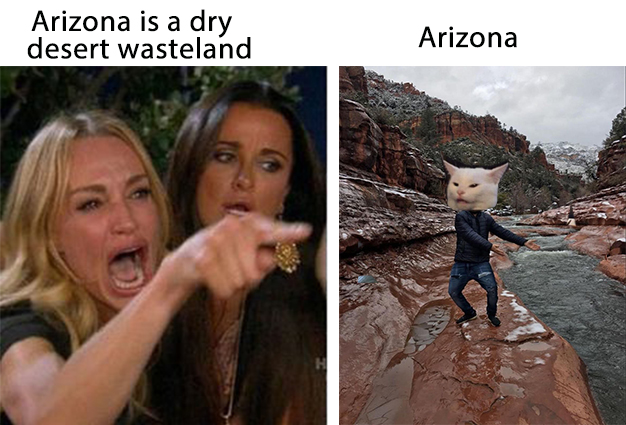 There are a lot of magical lakes and waterfalls in Arizona. But we guess you’re not too familiar with the place, so you think it’s just a big chunk of land, huh?

7. When it’s 119 degrees in Phoenix, don’t miss this opportunity. 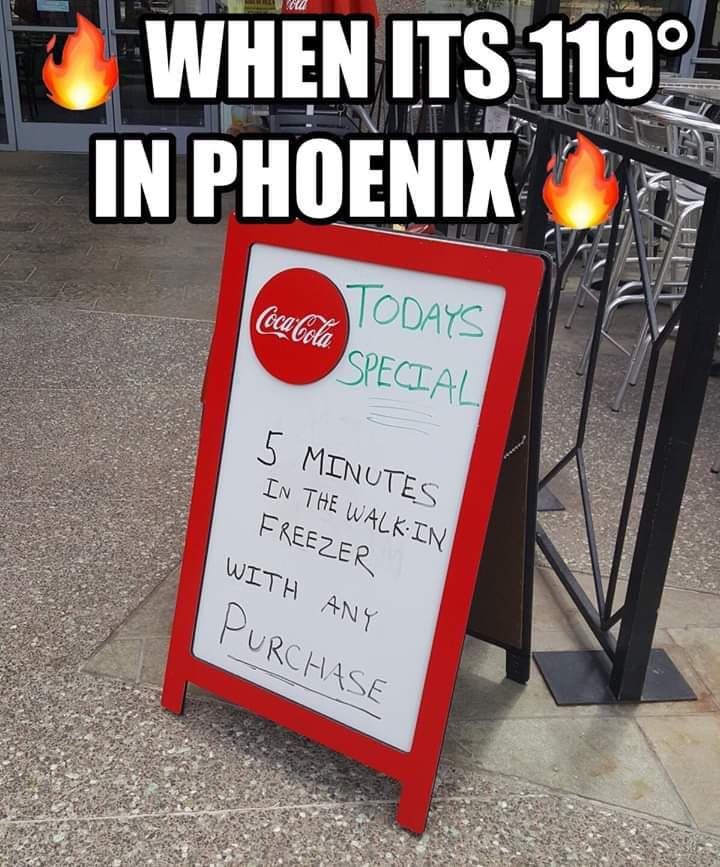 Hurry up! Buy anything because it’s scorching hot outside. I’d trade anything for a 5-minute walk in the freezer.

8. The life in Scottsdale is what it is. A big dusty adventure. 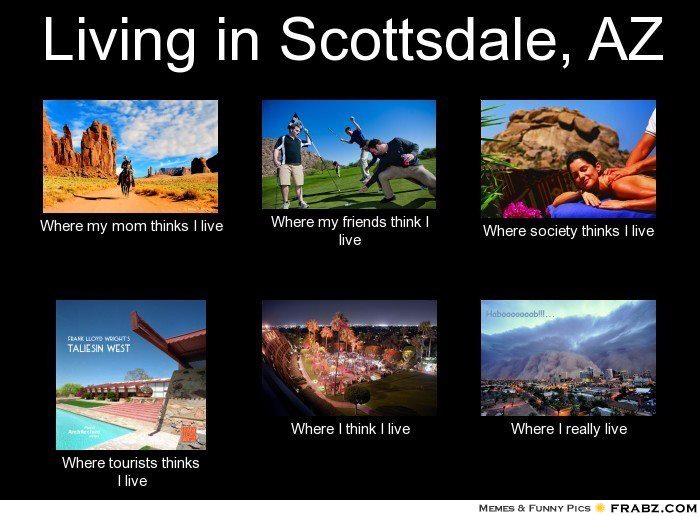 If only you get a hundred thousand dollars every time you see (and experience) a sandstorm, you’d probably be a millionaire by this time. Granted, of course, that we count the days since you were a child. Ah, the life in Scottsdale.

9. Remember that level in Super Mario 3 where the Sun is trying to kill you? That’s Arizona. 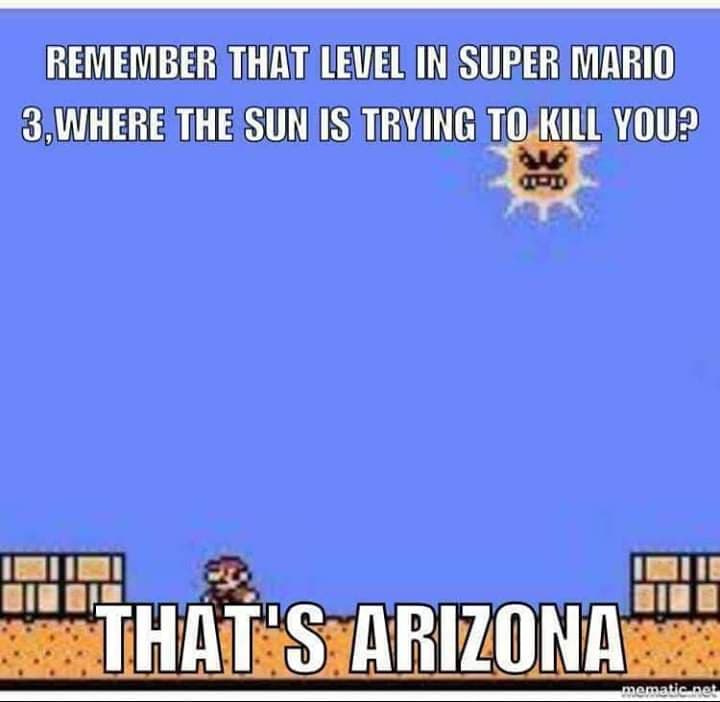 Care to reminisce about your favorite childhood video game? Well, Arizona is taking the sun’s heat to the next level by being better than Super Mario. 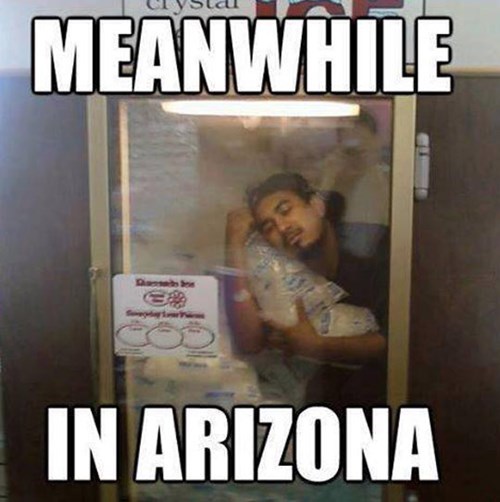 11. As if the state doesn’t have enough critters. 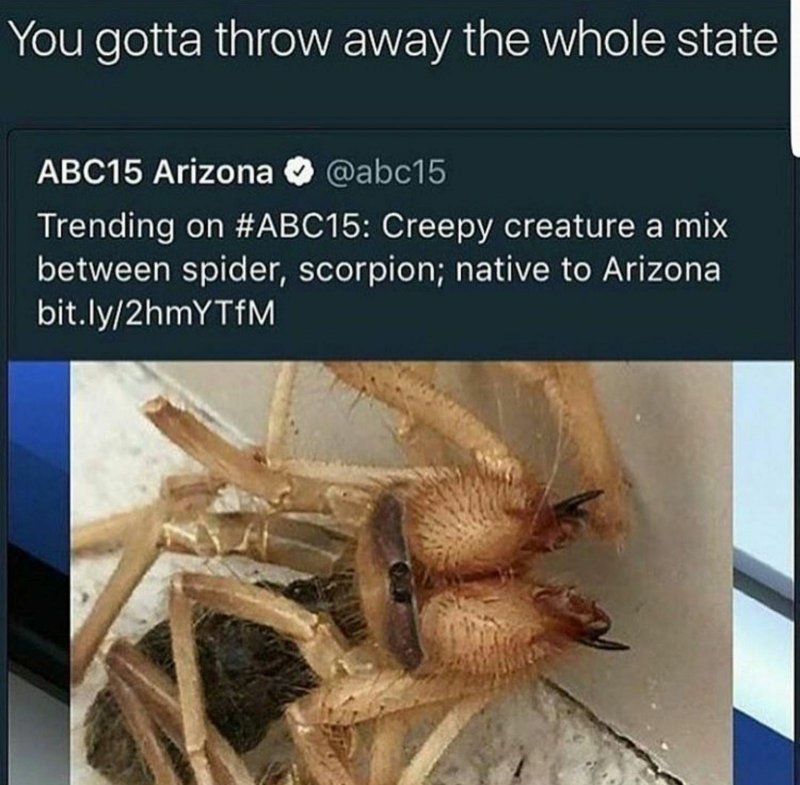 We already know we need to shake off our shoes when it’s left outside because of critters who probably crawled their way inside it. But now, we have to worry about this? There’s only one solution. Throw away the whole state! 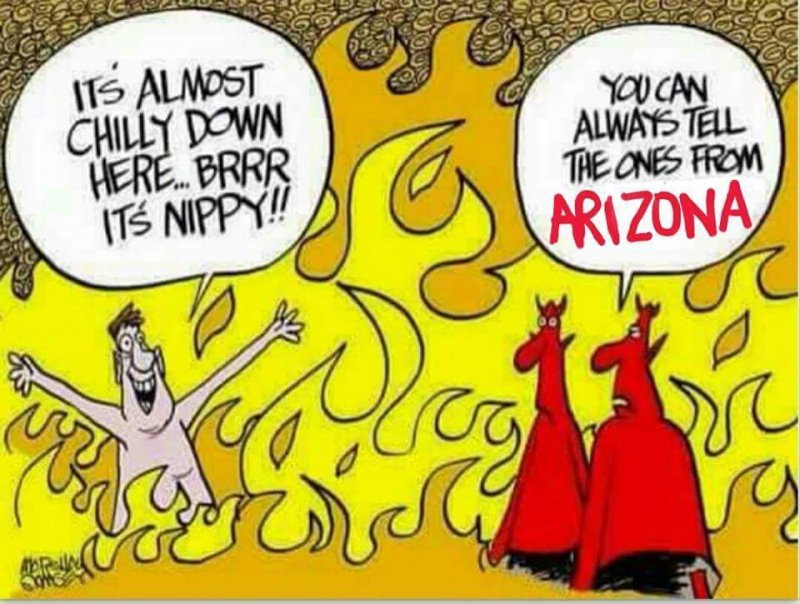 Every Arizonan would probably like, “It seems chilly down here! Thank you for the air conditioning.”

People living in Arizona would say, “we’re practically numb about the heat. But don’t worry. It’s perfectly normal. We were raised to handle extremely hot weather.” On the other hand, visiting tourists would believe Hell hath no fury like the heat in the state.

14. You can just cook on the way to your destination. 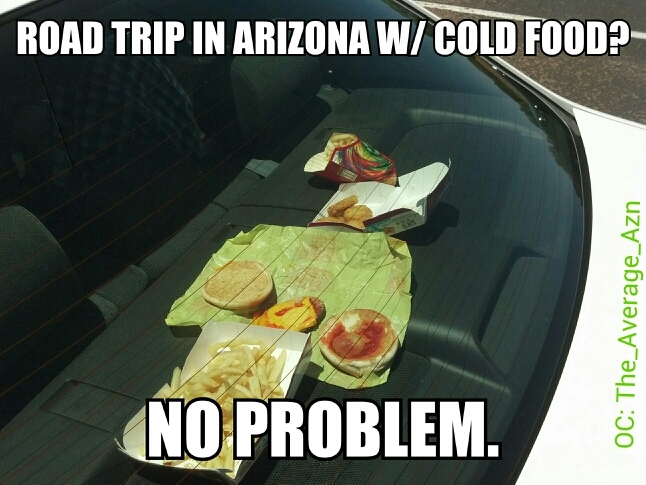 Don’t worry about bringing cold food if you’re about to go on a road trip. You know what they say! There’s no better place to reheat your food than inside your car. 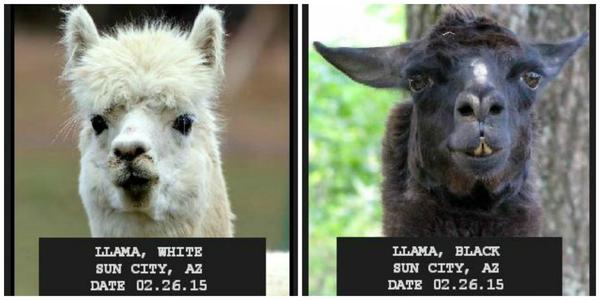 This happened a long time ago. But is there any chance you remember the two infamous llamas that ran free around Sun City? They were supposed to visit a former llama rancher in an assisted-living center. Apparently, the town was a much better destination. Well, these are their mug shots.

How long have you been living in the Grand Canyon State? Which of the following Arizona memes do you think is the funniest?