You can only read so many facts about the Superstition Mountains. But have you ever heard of the much-talked-about column of rock craved by erosion that appears in the stories of the Lost Dutchman’s Gold Mine? Yep, that’s what we thought. You still haven’t heard of Weavers Needle! What is this exactly and why do legends say it points the way to a vein of gold? 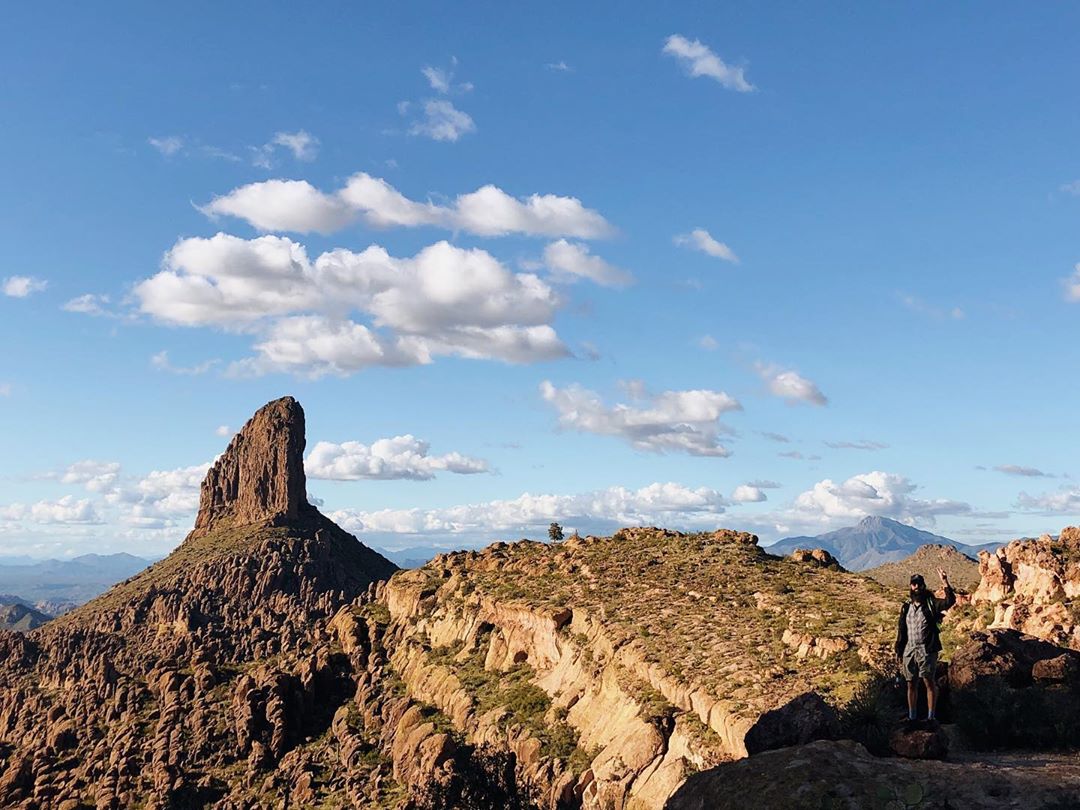 According to legend, the 1,000-foot Weavers Needle points the way to a rich vein of gold deep in the Superstition Mountains. It is often mentioned in Lost Dutchman’s Gold Mine stories because the said spire is believed to be the key to a trove of treasure.

What is this Lost Dutchman Gold Mine story exactly? And how many times are you going to repeat it? The Lost Dutchman Mine is a famous haunted gold mine in Arizona. Many who came in pursuit of the treasure lost their lives, and up to this day, the reason still remains a mystery. Some say that the Apache Indians were the first ones to set eyes on this terrain. Then, the Spaniards wasted no time and soon came looking for the lost mine. After some time, Weavers Needle just happened to make its way into the story, and people came hoping that it would indeed point them to the right (or rather, golden) direction.

If you hear about this legend, you may think it’s a funny thing. But that isn’t enough to stop hundreds or thousands of treasure hunters who came to search for it. Who knows? Maybe someone will eventually find the “gold.” If you love superstitions, legends, and a bit of mystery, this is the real deal.

Weavers Needle is a Prominent Feature of the Desert Landscape 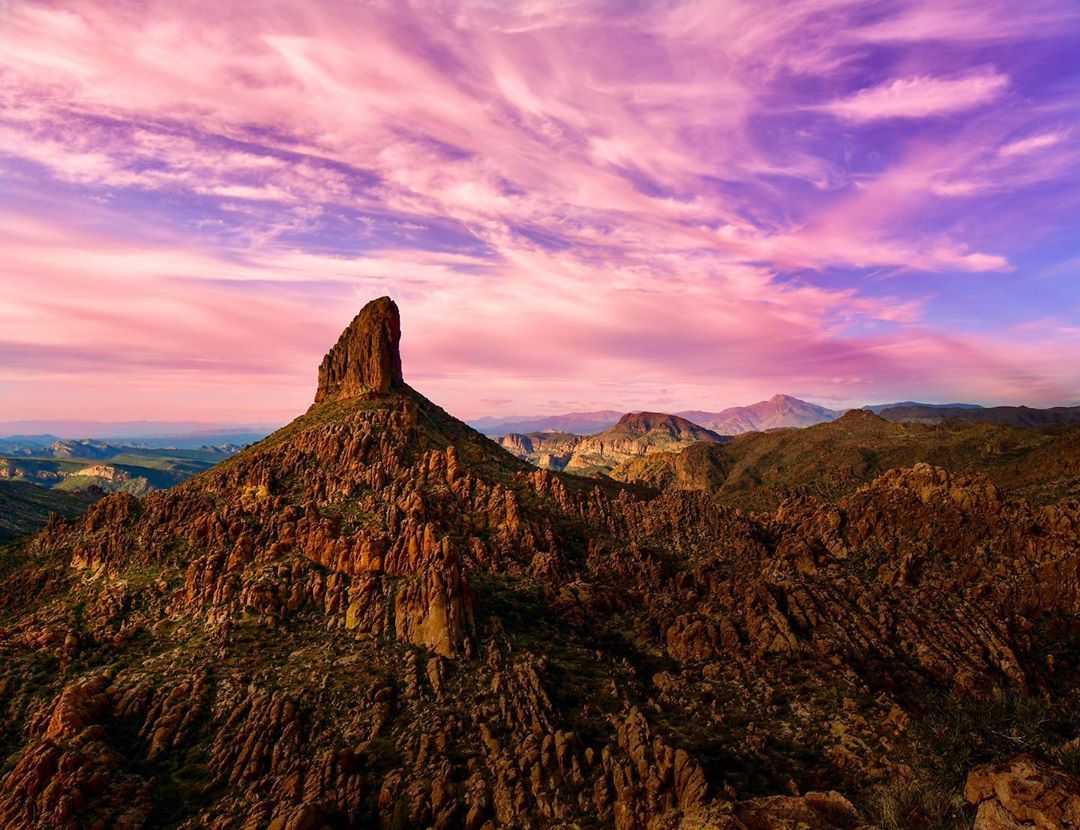 Enough about the gold! It’s safe to say that we have yet to believe the story because no one has found the treasure. Let’s just take this moment to appreciate what a fine piece of nature this column of rock is. And yes, rock. Not rocks.

The Weavers Needle actually has a large split in the side that makes it look like it has two tops, not one. If you go and look at it from the side, you’ll see that it’s only one rock formation.

It proudly stands at 1,000-foot tall and has a distinctive peak visible for many miles around. It was created when a thick layer of tuff, or used volcanic ash, was heavily eroded. This led to the creation of a spire (an erosional remnant) with a summit elevation of 4,555 feet. Weavers Needle sits among cacti, bush, and other desert plants. It is not just prominent. It’s also a beautiful and interesting addition to the desert landscape. The peak was named after mountain man Pauline Weaver.

If you hike in the Superstition Mountains, there’s a chance you’d spot this rock from afar.

Seeing the Famous Rock is a Moment to Remember Forever 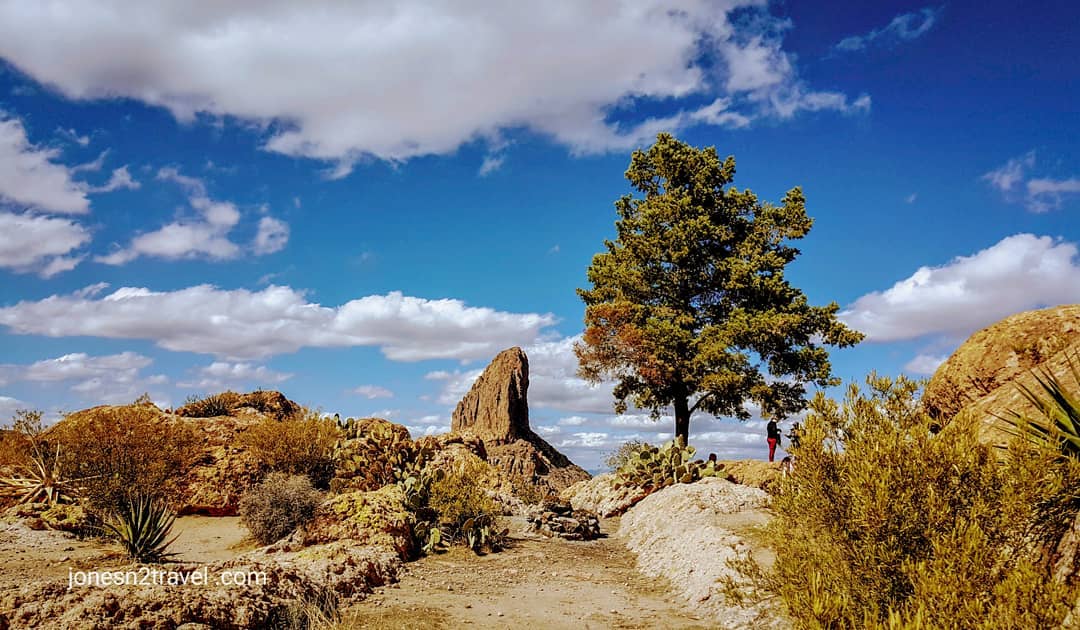 You can be one of the many treasure hunters who have tried their luck looking for gold. But don’t worry if you leave empty-handed. We won’t judge. Really. Weavers Needle is gold in itself, and it’s also a good treasure if you’re into photography. Give it your best shot (literally) and have a moment to remember forever. How does that sound?

The best way to see this famous rock formation is by hiking the Peralta Trail in the Superstition Mountains. This trail runs 6.2 miles along the southwest side of the Superstition Wilderness. You will pass through vegetated canyons with the Weavers Needle clearly in sight. Expect to climb up to Fremont Saddle in just 2.2 miles. After that, the crowd will thin on a more gradual descent through the Boulder Canyon to the Dutchman Trail split. 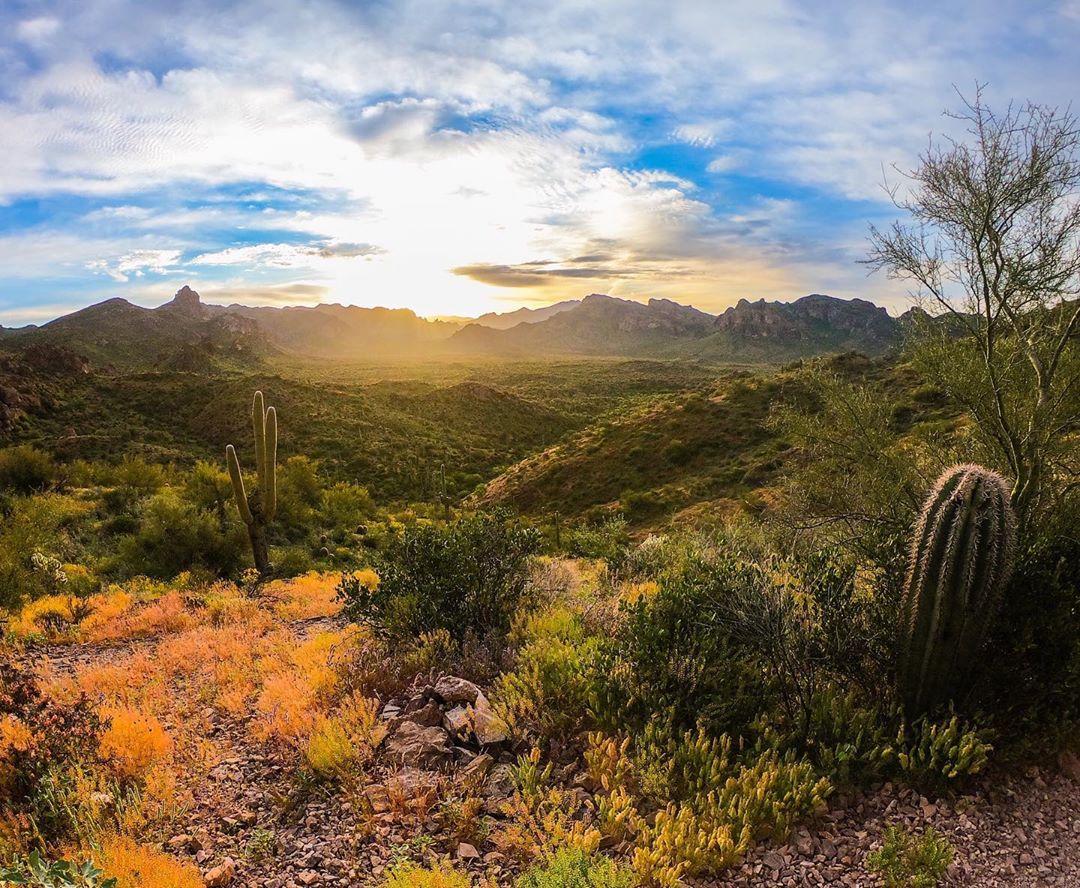 Your hike will begin at the mouth of the Peralta Canyon, and the path will be a heavily vegetated yet rugged path. The trail will be full of oak and mesquite views along the canyon’s seasonally flowing creek. Prepare to cross over seasonal pools and climb your way through steep rocks. There will be cacti gardens on the east side of the canyon, so you might want to stop to appreciate nature. 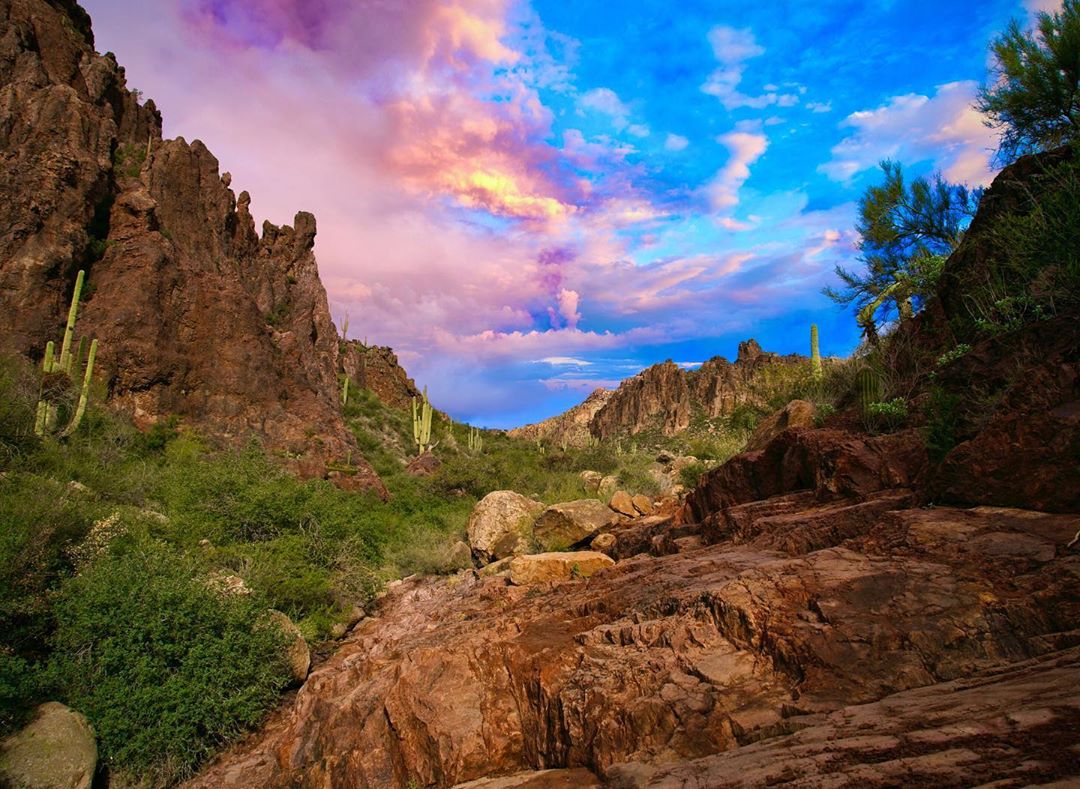 If you are a keen observer, you’ll notice the prevalence of agave as well as light and dark rocks in the upper canyon. The light rocks are actually welded tuffs, a composite of hot volcanic ash and cinder that fell back to earth and lithified. On the other hand, the dark rocks you’ll see are remnants of magma columns that solidified under the ground. These were exposed through differential erosion over time. Would you look at that, we’re talking science! 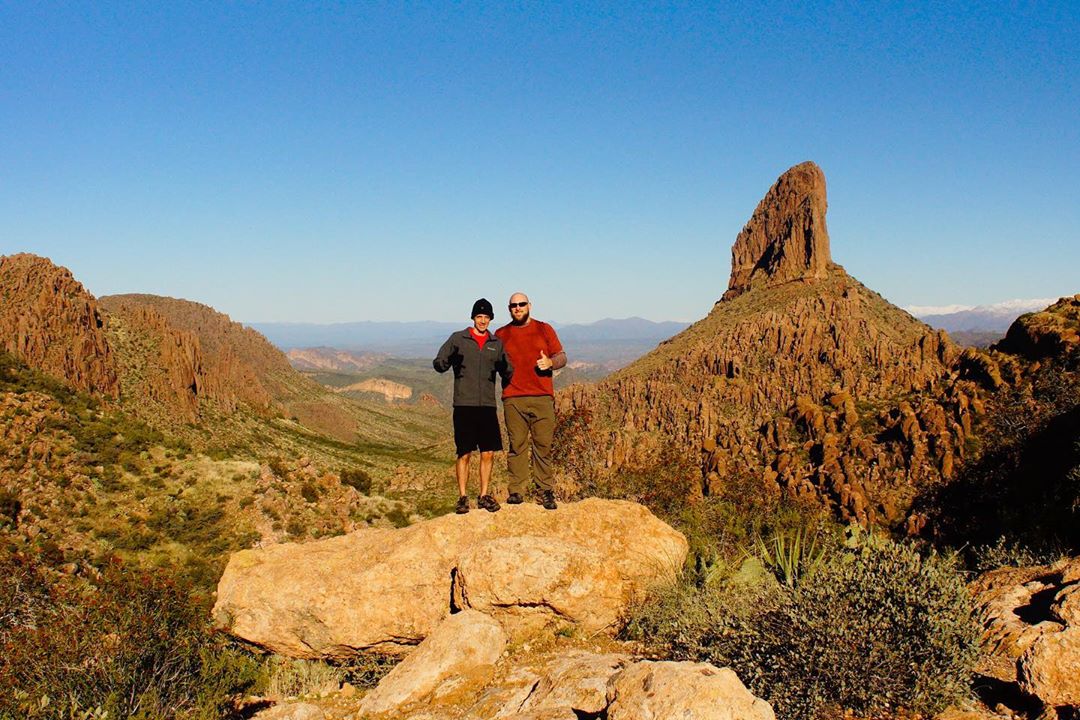 Peralta Trail crests on Fremont Saddle and will give you dramatic views north of the Weavers Needle, Boulder Canyon, as well as mesas, buttes and peaks in the backcountry. From here, it tilts downhill on the west side of upper Boulder Canyon. You will see yucca, grasses and jojoba.

The trail will then take you past several backcountry campsites, just following the Boulder Canyon Creek. Soon after, you’ll face a direct descent before rolling to the east side of a ridge in the canyon. From there, you’ll see the Black Top Mesa in all its glory. Continue on with the hike and you’ll reach the Peralta – Dutchman Trail junction in no time. Once you’re done taking photos, and appreciating the view, you may return the way you came. Those who want to extend the hike may do so as there is an option to form a loop by taking the Dutchman Trail to the Terrapin and Bluff Spring trails back to the trailhead. It’s more challenging because it has many steep climbs, not to mention some vague sections along the way.

Do you think the legend about the Weavers Needle is real or not?